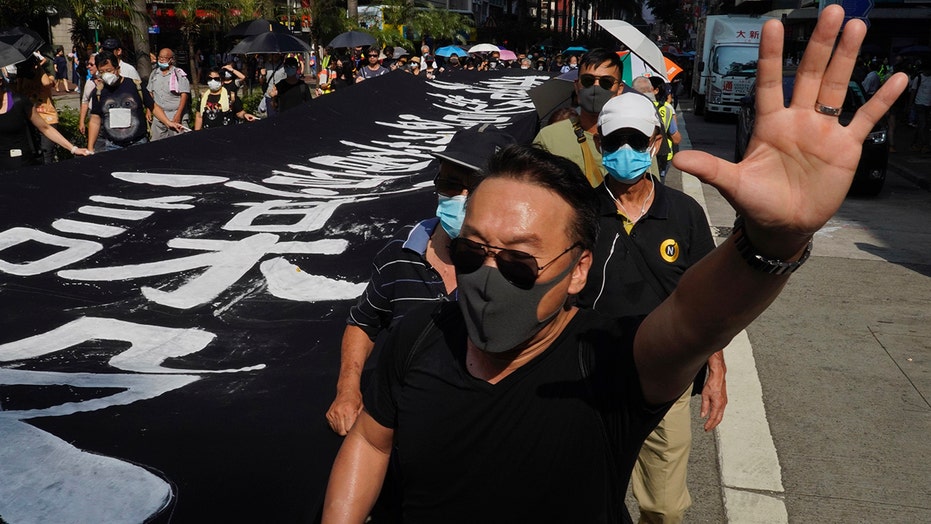 Lawmakers from across the political spectrum came together Monday – if only for a moment – to slam the NBA for essentially apologizing to China over a tweet by Houston Rockets General Manager Daryl Morey that expressed support for pro-democracy protests in Hong Kong.

The Morey tweet, which read, "Fight for freedom, stand with Hong Kong," prompted multiple Chinese businesses and organizations -- including the sportswear brand Li-Ning, SPD Bank and the Chinese Basketball Association -- to condemn the team and suspend their work with the franchise. The Chinese consulate in Houston also scolded the Rockets, saying: "We have lodged representations and expressed strong dissatisfaction with the Houston Rockets... Anybody with conscience would support the efforts made by the Hong Kong Special Administrative Region to safeguard Hong Kong’s social stability."

But American lawmakers, including from the team's home state of Texas, accused the Rockets and the NBA of appeasing a repressive Chinese government out of concern for their financial interests. The NBA is investing heavily in China, a market with 1.4 billion potential fans and a deep connection to Houston -- Hall of Fame center and former Rocket Yao Ming, the legendary Chinese basketball player, is president of China's official basketball association.

"As a lifelong @HoustonRockets fan, I was proud to see @dmorey call out the Chinese Communist Party's repressive treatment of protestors in Hong Kong," Sen. Ted Cruz, R-Texas, tweeted. "Now, in pursuit of big $$, the @nba is shamefully retreating."

Julián Castro, a Democratic presidential candidate from Texas, also issued a strong condemnation of China's treatment of protesters in the semi-autonomous former British colony of Hong Kong, who are advocating for increased freedom and democracy as they rail against what they say is oppression coming from Beijing.

"China is using its economic power to silence critics—even those in the U.S.," Castro tweeted. "The United States must lead with our values and speak out for pro-democracy protestors in Hong Kong, and not allow American citizens to be bullied by an authoritarian government."

Sen. John Cornyn, R-Texas, backed Castro, tweeting that he was glad to agree with the one-time Obama Housing and Urban Development secretary.

Senate Minority Leader Chuck Schumer, D-N.Y., said Sunday that he found the acquiescence to China from the NBA and the Rockets "unacceptable."

'Basketball fans and the American people more broadly should have absolutely no doubt about what is happening here: The NBA wants money, and the Communist Party of China is asking them to deny the most basic of human rights. In response, the NBA issued a statement saying money is the most important thing.'

"Basketball fans and the American people more broadly should have absolutely no doubt about what is happening here: The NBA wants money, and the Communist Party of China is asking them to deny the most basic of human rights," he said. "In response, the NBA issued a statement saying money is the most important thing."

Rockets owner Tilman Fertitta was quick to distance the team from Morey's statement on Friday. Quoting Morey's now-deleted post, he said that the GM spoke only for himself and emphasized the Rockets are "NOT a political organization."

"We apologize. You know, we love China. We love playing there,” Harden said, according to ESPN. “For both of us individually, we go there once or twice a year. They show us the most important love."

The NBA's official English-language statement on the matter expressed regret to "our friends and fans in China" without directly condemning Morey.

"We have great respect for the history and culture of China and hope that sports and the NBA can be used as a unifying force to bridge cultural divides and bring people together," it said.

The league's statement on its official Chinese social media account, however, took a different tone.

The NBA said Monday on that account that it was “extremely disappointed” by Morey’s “inappropriate” tweet about Hong Kong, which “severely hurt the feelings of Chinese fans.”

"Supporting a separatist movement in a Chinese territory is one of those third-rail issues, not only for the Chinese government, but also for all citizens in China," he wrote in a Facebook post. "1.4 billion Chinese citizens stand united when it comes to the territorial integrity of China and the country’s sovereignty over her homeland. This issue is non-negotiable."

This controversy comes after many American politicians issued rebukes of the Chinese Communist Party last week on the 70th anniversary of the founding of the People's Republic of China.

"To see the price of the [People's Republic of China's] anniversary celebration, look no further than what's happening in Hong Kong: a ceaseless war against those who wish to live in freedom," Sen. Tom Cotton R-Ark., said. "From the Great Leap Forward to the Cultural Revolution to the camps in Xinjiang today, it has been a ghoulish 70 years of Chinese Communist Party control."

Some Republicans broke with President Trump in those statements, however, as the president tweeted his congratulations to China on the anniversary.

Fox News' Ryan Gaydos and David Aaro, and The Associated Press contributed to this report.