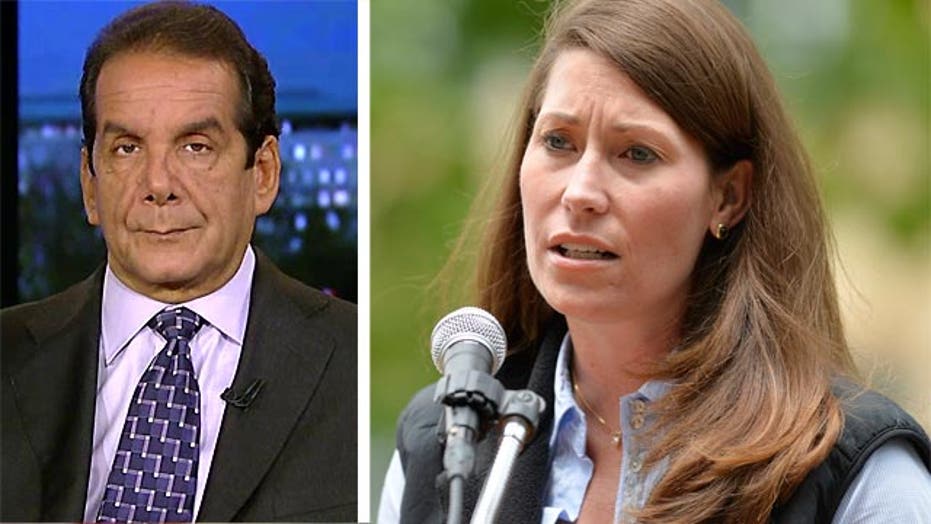 Krauthammer on Grimes: 'It's preposterous'

Charles Krauthammer said Tuesday on "Special Report with Bret Baier" thatKentucky Senate candidate Alison Lundergan Grimes' refusal to say whether she voted for President Obama is "preposterous" - but added that the tight race is a sign that Republicans may not be easily poised to take over the Senate in November.

"Grimes' result is preposterous," the syndicated columnist and Fox News contributor said of the candidate, who in a debate Monday cited a constitutional right to privacy as her reason for refusing to disclose her vote.

"The idea that because people can't be forced to disclose their vote in the ballot box, there's a constitutional requirement that you not disclose is simply ridiculous," Krauthammer said. "And that she would double-down, I really do think is a sign of how much of a rookie she is."

Krauthammer added, however, that he believes the race between Grimes and incumbent Senate Majority Leader Mitch McConnell should not be as close as it is - indicating that Republicans are not performing as well as expected in this year's midterm elections.

"If Republicans can't win Kentucky this year, with all the factors going in their favor - the unpopularity of the president, things abroad, things at home not looking good," Krauthammer said, "indicates that Republicans are doing a lot worse this year - even though I think they're going to get a majority - than they should be doing."