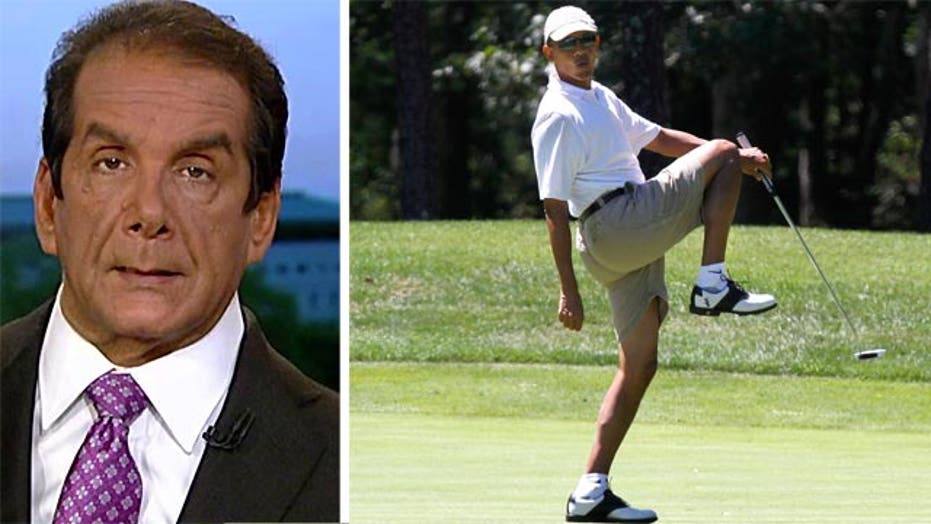 Charles Krauthammer told viewers Thursday on “Special Report with Bret Baier” that Americans’ opinions on increased  U.S. involvement in Ukraine show, “there's a general perception the world is going to hell and the president's out there playing golf. There's a disconnect here. “

A Fox News Poll released Wednesday showed that by a margin of 61 to 32 percent, voters think the U.S. should not get more involved in Ukraine. Most of those polled, 75 percent, believe that Russian President Vladimir Putin has the “upper hand” in Ukraine while just 14 percent think President Obama is in control of the situation.

Krauthammer, a syndicated columnist and Fox News contributor, said those numbers are a reflection of mixed messages and a lack of action by the president. “That doesn't mean that people want to go to war in Ukraine, so I'm not at all surprised people say ‘do you want to be involved?’ Of course not. Nobody wants to be involved, particularly the president, who doesn't go out there and make the case for it.

“Why would anybody decide to get involved? And, of course when the president is inactive, as he is now on this issue, has done nothing of substance, they say 'well what do you want to do? Go to war? Send troops into Ukraine?'”

Krauthammer added there was more to the issue than simply escalating the conflict.  “The other policies between nothing and war, there is a huge territory,” he said. “Within which lies sending weaponry to Ukraine, which has been begging for (it) and which we have not been giving them.”

Krauthammer also suggested that a shift in world opinion regarding Russia’s actions in Ukraine after the downing of Malaysian Airlines flight MH17 last week, killing 298 civilians, were ultimately meaningless without action.  “World opinion on its own is useless,” he said.

“It's ephemeral and without leadership it does nothing. You have to galvanize it. The Europeans have done nothing except add a couple of names onto a list of people who get their assets frozen and who are denied a visa, so they can't vacation in Disney World. That is not exactly going to bring down the Russian economy.”