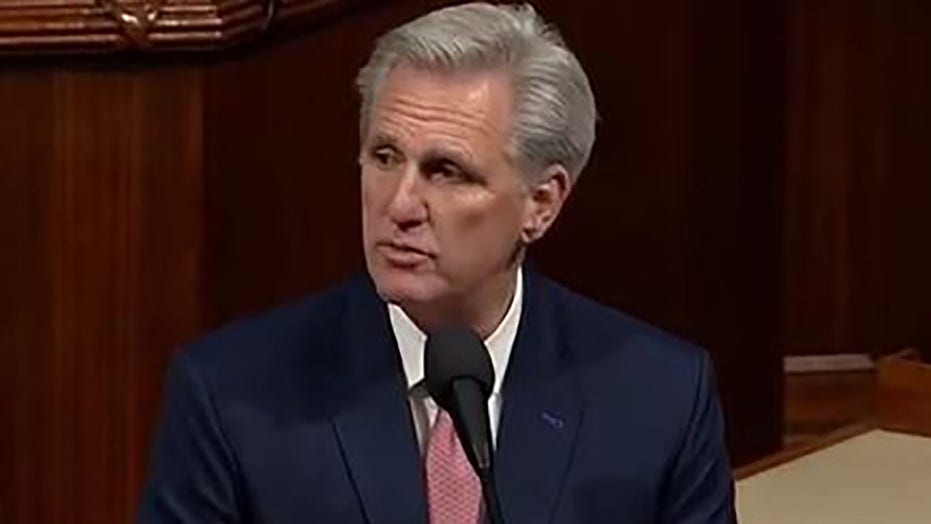 Rep. McCarthy on House police reform hearing: This is a moment to listen

House Minority Leader Rep. Kevin McCarthy shares the story of woman whose officer brother was killed on duty ahead of her testimony on Capitol Hill.

House Minority Leader Kevin McCarthy tore into the protesters who have been tearing down statues around the country in recent weeks, arguing, “They aim to upend society, not reform it” in a new op-ed.

“If you are asking, ‘where will they draw the line,’ it has become clear they won’t,” the California Republican wrote in the Daily Caller Tuesday.

Demonstrators have vandalized and dismantled Confederate monuments and depictions of Christopher Columbus around the U.S., and they have defaced and destroyed other statues with racially charged histories.

But McCarthy ripped into the mobs for also toppling a statue of the first American president, George Washington, in Portland on June 18 – and for pulling down a statue of President Ulysses S. Grant in San Francisco a day later.

“This is the same Grant who, as leader of the Union Army, was unrelenting in his demand of ‘unconditional surrender’ from the Confederacy,” McCarthy wrote in the essay. “It is also the same Grant who, as President of the United States and heir to Abraham Lincoln’s legacy, aggressively prosecuted the Ku Klux Klan, signed the first major civil rights legislation and presided over the ratification of the 15th Amendment.”

The 15th Amendment established that the government cannot deny voting rights to American citizens based on race.

“The abolitionist Frederick Douglass memorialized [President Grant] as ‘too broad for prejudice, too humane to despise the humblest, too great to be small at any point,’” McCarthy noted. “Yet the lawless mob still came for him last week.”

The congressman called on the Justice Department to bring charges against rioters and vandals who target monuments under laws like the Veteran’s Memorial Preservation and Recognition Act, which President Trump also invoked on Tuesday. And McCarthy said lawmakers needed to hold local governments accountable when they “cave to the left-wing mob.”

“Why should Federal taxpayers subsidize, let alone tolerate, such tacit or intentional approval of lawlessness?” he wrote. “The power of the purse should be used to protect statues and, if necessary, rebuild them.”

The mob, in McCarthy’s words, “presents a serious threat to the American way of life.”