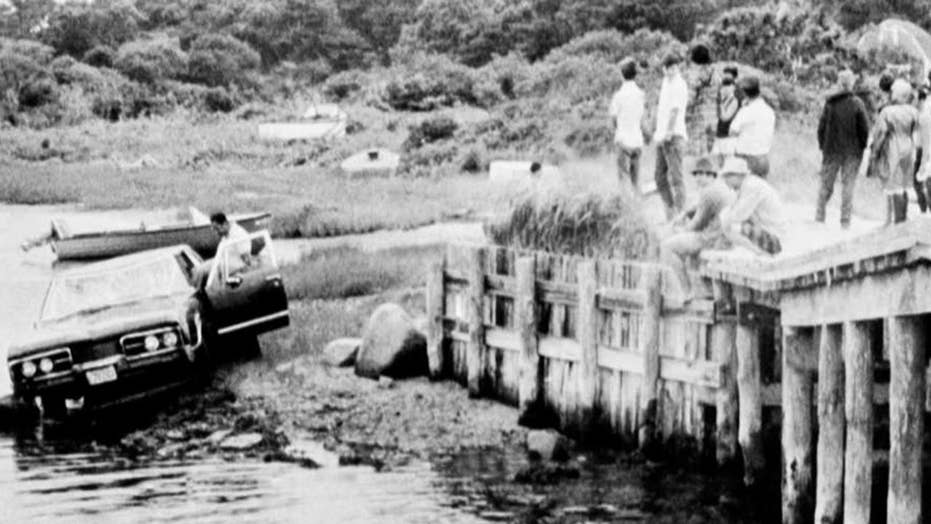 Few understand the details about what Ted Kennedy did and didn't do when it comes to the Chappaquiddick scandal; film producer Mark Ciardi discusses new movie that may answer some questions.

The Kennedy dynasty faced a reckoning Friday, when a film hit theaters resurrecting the shocking details surrounding a late-night deadly car crash at Chappaquiddick Island that has haunted America’s most powerful political family since 1969.

“Chappaquiddick” opened in movie theaters across the U.S., drawing all eyes to the Kennedy family as the film renews questions about the controversial  incident at the island off Martha’s Vineyard, Massachusetts in 1969.

After the assassinations of both his brothers, former Sen. Ted Kennedy, D-Mass., was slated to carry the family’s political aspirations, even mulling a run for president of the United States.

But the movie tells the story of the incident that stopped that potential campaign in its tracks—depicting the involvement of Kennedy, then 37, in the fatal July 19, 1969 car accident that claimed the life of a young campaign strategist, Mary Jo Kopechne.

At approximately 12:50 a.m., Kennedy and Kopechne, 28, were driving back from a party hosted by a cousin of Kennedy on Martha’s Vineyard following the Edgartown Regatta, in which Kennedy had sailed. Kennedy’s car plunged 10 feet off of a bridge and into a pond, killing Kopechne and giving Kennedy “a slight concussion.”

Kennedy told police that he was “unfamiliar with the road,” came up to a narrow bridge, and said the car “went off the side of the bridge.” According to a description from a 1969 New York Times article, the road approaching the bridge is “narrow” with “no warning sign on the approach.”

Mary Jo Kopechne, 28, was killed in the Chappaquiddick incident in July 1969. (AP)

Kennedy also told police that he had “no recollection” of how he got out of the car, which sank, landing with the roof resting on the bottom. Kennedy said that he “came to the surface and repeatedly dove down to the car in an attempt to see if the passenger was still in the car,” noting he was “unsuccessful in the attempt.”

Police said there was “apparently no criminal negligence involved in the accident itself.”

The accident, though, was not reported by Kennedy, but rather by a mother of a little boy who saw the overturned car in the pond when he was fishing.

Kennedy later described his failure to report the incident to police for 10 hours as “indefensible.”

Kennedy did, though, speak of the “Kennedy curse,” following the incident in a televised address, questioning whether “some awful curse did actually hang over all the Kennedys.”

Kennedy’s eldest brother, Joseph Kennedy Jr. died in 1944 in World War II; his sister, Kathleen Kennedy Cavendish, died in a plane crash in 1948; his brother, former President John F. Kennedy was assassinated in 1963; his brother Robert Kennedy, who served as JFK’s attorney general, was assassinated in 1968; decades later, in 1997, Robert F. Kennedy’s son Michael was killed in a skiing accident; and in 1999, John F. Kennedy Jr. died while flying his plane to Martha’s Vineyard.

While the incident squashed Kennedy’s hopes of running for president, he did serve as one of the longest-serving U.S. senators, and passed away in 2009 at the age of 77.

Former Sen. Ted Kennedy, D-Mass., was one of the longest serving U.S. senators in history. (Reuters)

His office, though, did not respond to Fox News’ request for comment on the premiere of “Chappaquiddick.”

Chris Kennedy, the grandson of Robert F. Kennedy, launched a gubernatorial bid in Illinois, but failed to garner the votes to win the Democratic nomination last month.

Caroline Kennedy, the only surviving child of JFK, served as the U.S. ambassador to Japan from 2013 to 2017, appointed by former President Barack Obama. When Obama appointed Hillary Clinton as secretary of state, she mulled a run for Clinton’s Senate seat, but chose not to run.

Despite not holding public office, Kennedy is still involved in the political world. Just last month, she spoke at the Desert Town Hall in California about navigating East Asian politics during her tenure as ambassador, and also discussing Trump and rising tensions with North Korea.

Douglas Kennedy, a son of Robert F. Kennedy, is a news correspondent at Fox News Channel.

Other Kennedys, while not yet rising to the political scene, have not stayed too far from the public eye.

In 2016, a grandson of RFK, Connor Kennedy, was arrested in Aspen, Colorado after allegedly getting into a fight in front of a nightclub. Connor also dated famed pop star Taylor Swift for a short period in 2012.