Ken Starr: There would be ‘outrage’ if conservatives protested at justices' homes

Ken Starr, a noted attorney who helped impeach one president and defended another from the same fate, died Tuesday at the age of 76.

Starr died in Houston of complications from surgery, a statement released by his family said.

"My beloved, brilliant, kind, and loving husband has gone to be with his Savior after 17 weeks in the Surgical Intensive Care Unit at Baylor St. Luke’s Medical Center in Houston due to complications from surgery," Starr's wife of 52 years, Alice Starr, said in a separate statement. "Ken was so very courageous, he never complained and he continually expressed gratitude to all his nurses and doctors for their care."

"Ken was a truly gifted speaker, writer and leader and worked prodigiously as one of the country’s top appellate attorneys," she added. "Yet he was always humble, gracious and loving.  His integrity and judicious temperament were greatly admired by those who worked with him."

Starr, a venerated lawyer and Republican operative, was best known for his role as the independent counsel in the Whitewater affair. Appointed in 1994 to probe a shadowy land deal involving President Bill Clinton’s tenure as governor of Arkansas, Starr widely expanded the probe.

The investigation snowballed from Clinton’s involvement in the failed real estate venture to misconduct in the White House travel office, the unauthorized obtaining of FBI personnel files by senior administration staffers, and finally the president’s affair with an intern named Monica Lewinsky.

Starr often told reporters and pundits that he was compelled to take the Whitewater appointment because of principle.

"Truth is a bedrock concept in morality and law," he often said.

Ken Starr, a venerated lawyer and Republican operative, was best known for his role as the independent counsel in the Whitewater affair. (Fox News)

Born in Vernon Texas in 1946, Starr was the son of a Congregationalist minister and grew up in San Antonio. He excelled at school, eventually graduating with a bachelor's degree in history from George Washington University in 1968.

Starr earned a master’s degree from Brown University the year after. In the early 1970s, he attended Duke University Law School, where he edited the institution’s law journal.

After graduating from Duke Law in 1973, Starr clerked for a federal appellate court judge. The experience led to a two-year clerkship with Supreme Court Justice Warren Burger between 1975 and 1977.

The experience helped land Starr a Justice Department job in 1981 when President Ronald Reagan swept into office. Starr excelled in the role, serving as an aide to the attorney general.

In 1983 at the age of 37, Starr was nominated by Reagan to serve on the United States District Court of Appeals. Starr served as a judge until 1989 when he was appointed to serve as solicitor general by President George H.W. Bush.

In the role, Starr represented the federal government in front of the Supreme Court 25 times on a bevy of matters. In 1990, he was considered a front-runner to replace Associate Justice William Brennan on the Supreme Court. Bush opted instead to appoint David Souter after concerns emerged that Starr might not be conservative enough.

"I was saddened to learn of Ken Starr’s passing. I worked under him on Attorney General William French Smith’s staff, and as his deputy when he was Solicitor General," U.S. Supreme Court Chief Justice John Roberts said. "Ken loved our country and served it with dedication and distinction. He led by example, in the legal profession, public service, and the community. Jane and I send our deepest sympathies to Alice and the extended Starr family."

KEN STARR: DEMOCRATS ARE 'DEFINING IMPEACHMENT DOWN' WITH NO EVIDENCE OF A CRIME

In this Dec. 19, 1998 file photo, First lady Hillary Rodham Clinton watches President Bill Clinton thanks the Democratic members of the House of Representatives who voted against impeachment at the White House in Washington. (AP Photo/Susan Walsh)

After Bush lost re-election in 1992 to Clinton, Starr ventured into private practice, joining the firm of Kirkland & Ellis. Starr was at the firm when a special three-judge panel appointed him to oversee the Whitewater affair in August 1994.

He zealously pursued charges against Clinton during the White House sex scandal.

Under Starr’s watch, the probe grew to include hundreds of staffers — costing taxpayers more than $52 million over a six-year time span. It resulted in more than two dozen indictments, a dozen convictions, and Clinton’s impeachment and eventual acquittal for allegedly lying and obstructing justice.

"What one finds out in getting into an investigation is, ‘Oh my word’ — there are different avenues that come to you," Starr told CNN in 2018 while discussing his tenure as investigative counsel.

Clinton’s impeachment backfired on Republicans, with the party losing four House seats in the 1998 midterms. The results defied historical trends, which usually show the president’s party losing seats after six years in office.

After his stint overseeing the Whitewater probe, Starr returned to private practice. In his later years, he served as a high-profile appellate lawyer in front of the Supreme Court, arguing several cases successfully.

In 2010, Starr became the president of Baylor University in Waco, Texas. As president, he oversaw the opening of the university’s $250 million football stadium. His administration also prioritized expanding academic, athletic and extracurricular opportunities for students.

"He was not someone who had a history with Baylor, but he was a big name, and they were looking to raise their profile and raise more money for the university and thought that bringing him in would really appeal to the donors," ESPN reporter Paula Lavigne told NPR earlier this year.

Starr’s tenure at the helm of the school was not without blemish, however. Starr resigned from the position in 2016 over the criticism surrounding the university’s handling of alleged sexual assaults by football players on the Baptist university's campus.

"I didn't know about what was happening, but I have to and I willingly do accept responsibility," Starr said at the time. "The captain goes down with the ship."

In a statement, university President Linda A. Livingstone called Starr a "dedicated public servant and ardent supporter of religious freedom."

"Judge Starr had a profound impact on Baylor University, leading a collaborative visioning process to develop the Pro Futuris strategic vision in 2012 that placed Baylor on the path to where we are today as a Christian Research 1 institution," Livingstone said. "Baylor University and the Baylor Family express our deepest sympathies to Alice Starr and her family, and our prayers remain with them as they mourn the loss of a husband, father and grandfather. May God’s peace and comfort surround them and give them strength now, and in the days to come."

After exiting academia, Starr returned to law and politics. In 2018, he emerged as a key defender of Associate Justice Brett Kavanaugh during the latter’s confirmation process.

At the time, Starr said he was pushed to take the job because of the politicization of the impeachment process by congressional Democrats.

"The Senate is being called to sit as the high court of impeachment all too frequently," he said. "Indeed, we are living in what I think can aptly be described as the age of impeachment." 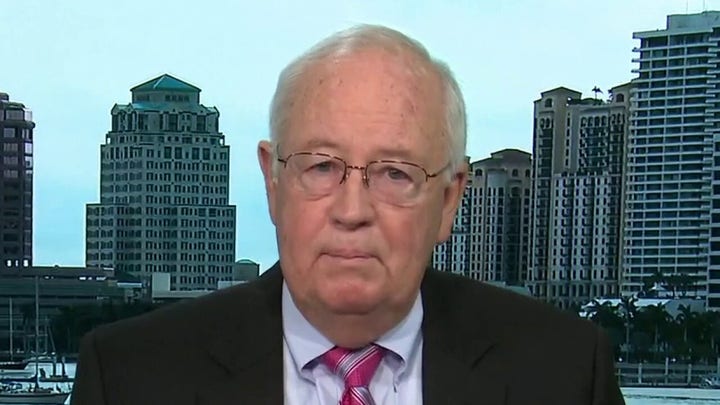 Starr leaves behind his wife, Alice Mendell Starr, three children and nine grandchildren, his family said. He will be buried at the Texas State Cemetery in Austin.