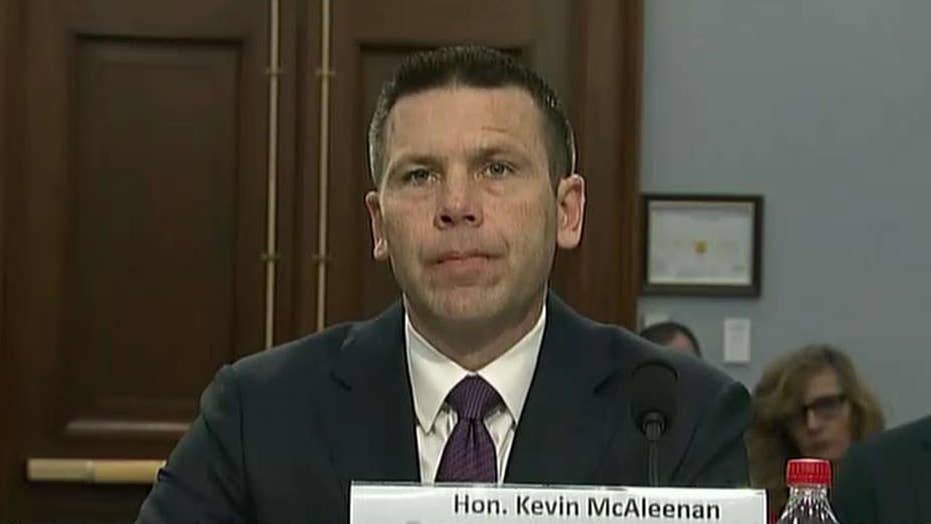 President Trump says that McAleenan 'has done an outstanding job', and will announce his replacement next week; Garrett Tenney reports.

U.S. Citizenship and Immigration Services (USCIS) Acting Director Ken Cuccinelli is being seen as a likely replacement for outgoing Department of Homeland Security Acting Secretary Kevin McAleenan, sources tell Fox News -- a move that would be welcomed by immigration hardliners.

President Trump on Friday announced that McAleenan would be leaving the job to spend more time with his family, and added that the new acting secretary would be announced next week.

“Many wonderful candidates,” he said.

The announcement immediately led to speculation as to who would step into the vital cabinet position -- one that is a central post for the nation's immigration policy.

A former senior DHS official with close ties to the administration told Fox News Friday that Cuccinelli is on the top of Trump’s list to be the next acting secretary. The source noted that a Senate confirmation hearing would be bruising for Cuccinelli but "he, [White House adviser] Steve Miller and Trump are all in sync on a number of key policies.

"They have been trying to clear the way for a while," the source said.

If Trump doesn’t go with Cuccinelli, the source said Trump may go with former Kansas Secretary of State Kris Kobach -- another hardliner who has long been floated for a possible administration position but is currently running for the U.S. Senate.

One administration official told Fox News on Saturday that Cuccinelli was in “good standing” for the position. 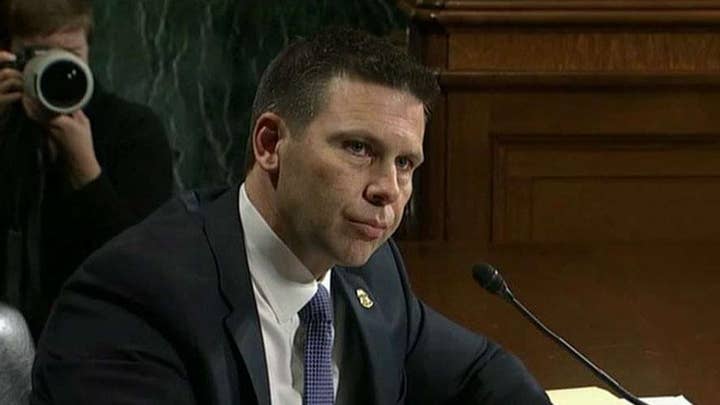 “Ken has been very effective on the regulatory side and he has proven to be a team player who will do every media hit no matter how small or how hostile,” the official said. “Ken is someone who hands-down supports and defends the work of the president and the administration.”

Trump may face some resistance from Senate Majority Leader Mitch McConnell, R-Ky., who has in the past indicated his "lack of enthusiasm" for Cuccinelli. That could make getting Cuccinelli confirmed difficult. Cuccinelli was previously president of the Senate Conservatives Fund, which seeks to push more conservative Senate candidates and was therefore often critical of McConnell and his allies.

"I've not spoken to [Trump] about any of them. I have expressed my, shall I say, lack of enthusiasm for one of them ... Ken Cuccinelli," McConnell told reporters in April when Cuccinelli was floated to replace former DHS Secretary Kirstjen Nielsen, according to The Hill.

However, a Cuccinelli pick would be welcomed by many conservatives, particularly those focused on immigration and who didn't warm to McAleenan. As head of USCIS since the summer -- an often overlooked agency that deals with bureaucratic issues to do with green card applications and citizenship requests -- Cuccinneli put a hardline stamp on the agency with policies that picked up national attention.

Perhaps the most striking of those changes was the “public charge” rule that toughened and clarified guidance for officials as to when they should deny green cards to immigrants deemed likely to rely on government welfare.

The rule defined public charge as an immigrant who receives one or more designated benefits for more than 12 months within a 36-month period. It also expanded the number of benefits that could be considered. On Friday, however, the rule was dealt a setback when a federal judge issued a nationwide injunction blocking it from being implemented.

“An objective judiciary will see that this rule lies squarely within long-held existing law,” Cuccinelli said in response.

In addition to public charge, Cuccinelli has also pushed a number of significant, and often controversial, changes. Buzzfeed News reported last month that he sought the power to publicize information about migrants being prosecuted for certain crimes. His agency has also tightened rules for awarding work permits to immigrants allowed into the U.S. for humanitarian reasons and has also cut the two-day window between detention and interview to one.

He has also not shied away from the media glare and from wading into controversies when defending the administration, something that may endear him to the president.

In August, in defending the public charge rule, he faced questions from reporters that the public charge rule was not in keeping with Emma Lazarus’ “The New Colossus” -- a sonnet added to the bottom of the Statue of Liberty that has become known for the line: “give me your tired and poor, your huddled masses yearning to breathe free...”

Asked separately about the poem’s reference to “wretched refuse,” Cuccinelli commented that the poem was "referring back to people coming from Europe where they had class-based societies where people were considered wretched if they weren’t in the right class." That remark sparked controversy from figures from 2020 hopeful Beto O’Rourke to pop singer Rihanna.

Cuccinelli has used his Twitter account (which he operates himself) to challenge the executive of Montgomery County, Md., to a debate over “sanctuary city” policies after a series of sex crimes allegedly perpetrated by illegal immigrants.

“I’ll defend children and crime victims, Elrich can defend rapists and murders who shouldn’t even be in this country,” he said.

He has also supported the use of “illegal aliens” to refer to illegal immigrants in U.S. law, even as McAleenan shied away from that term. Measures like that have earned him a reputation that has endeared him to groups in favor of tougher restrictions on immigration.

"The choice is clear, he must elevate Ken Cuccinelli," RJ Hauman, government relations director at the restrictionist Federation for American Immigration Reform (FAIR), told Politico. "The president understands that the opposition seeks to stop his efforts to secure the border and restore control over our nation’s immigration system through court orders and injunctions. What better force to stop this than the former attorney general of Virginia and one of the most skilled appellate lawyers in the country?"