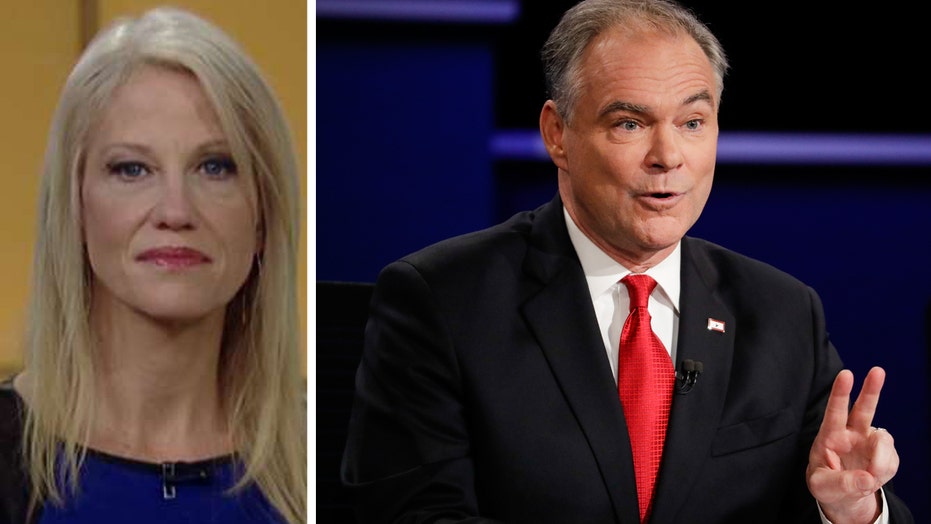 In a presidential race where Hillary Clinton has sought to disqualify Donald Trump over his “temperament,” running mate Tim Kaine is facing mounting fallout over his own demeanor at Tuesday night’s first-and-only VP debate – where the Virginia senator frequently interrupted not only Mike Pence but the moderator.

“He interrupted 72 times,” she said. “It doesn’t play well on TV … and frankly, the ignoring of the female moderator was really a low point.”

Conway claimed the Clinton camp was dealing with a “one-two punch” – a day after Bill Clinton undercut his wife’s health care message by criticizing the “crazy” ObamaCare system, she said, Kaine spent Tuesday night “doing her no favors.”

“Why in the world was her running mate interrupting and ignoring a female moderator?” Conway said. “It was almost like he didn’t hear her.”

The vice presidential debates rarely have a big impact on the race for the White House, and it's unclear whether Tuesday's feisty faceoff will make a dent in the numbers as the candidates at the top of the ticket prepare for their second debate, this Sunday.

And while Kaine was taking heat, both running mates had their share of interruptions Tuesday night. An analysis by FiveThirtyEight said Kaine logged more than 70 interjections and interruptions, while Pence had more than 40.

Quijano, too, faced criticism from some analysts for letting the format get out of hand.

But the debate on balance showed Kaine stepping immediately into the role of aggressor, going after Trump’s tax returns, his coarse campaign comments, his praise of “dictators” and more – while Pence sought to defend his running mate from the verbal attacks.

By Wednesday morning, both Trump and Clinton were giving their respective running mates a big thumbs-up, but analysts largely were giving Pence higher marks for his composure on stage as GOP groups seized on the debate's unruly moments.

“While Tim Kaine desperately flailed away with empty platitudes and constant interruptions, Mike Pence put forth the Trump-Pence vision for shaking up the Beltway, keeping Americans safe from terrorism, and making sure the American Dream is within everyone’s reach,” Republican National Committee Chairman Reince Priebus said in a statement.

An energized Pence, at a campaign stop Wednesday in Harrisonburg, Va., declared that Trump won the debate. 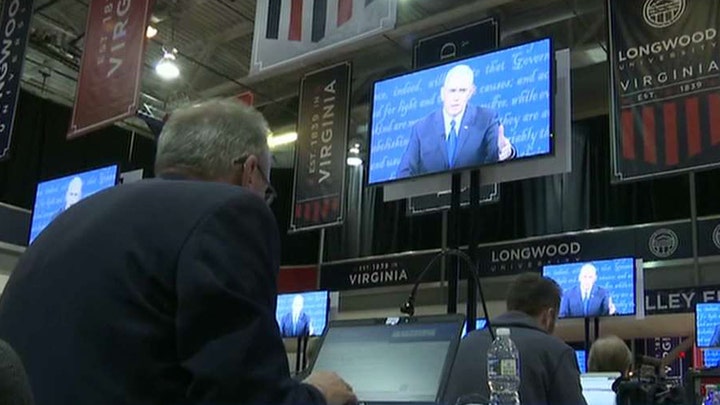 Democrats, for their part, touted Kaine’s performance. Clinton campaign manager Robby Mook credited Kaine for interjecting and said Trump is the one who lost the debate because Pence, he claimed, did not adequately defend him.

Lucky to have a partner like @TimKaine who stood up for our shared vision tonight—instead of trying to deny it. #VPDebate

“I think [Kaine] had some points he wanted to make and he wasn’t going to let falsehoods just lay on the table,” Clinton campaign chairman John Podesta said.

Trump, who live-tweeted during the debate, praised Pence when it was all over.

During their many feisty exchanges Tuesday night, Kaine pressured Pence to answer for some of his running mate’s more controversial comments, including praising Russian President Vladimir Putin and calling for a Muslim immigration ban in the United States. He also said Trump needed to make his taxes public, while ripping the GOP presidential nominee over his coarse language and a “selfish me-first style.”

“I cannot believe that Governor Pence would defend the insult-driven campaign that [Trump] has run,” Kaine said.

Pence countered that Trump’s comments are “small potatoes” compared with Clinton calling half their supporters a “basket of deplorables.”

Pence also defended Trump's tax handling and said his running mate “used the tax code just the way it’s supposed to be used, and he did it brilliantly.” He also asked Kaine: "Do you not take deductions?"

Kaine had said: "Donald Trump must give the American public his tax returns to show he's prepared to be president, and he's breaking his promise."