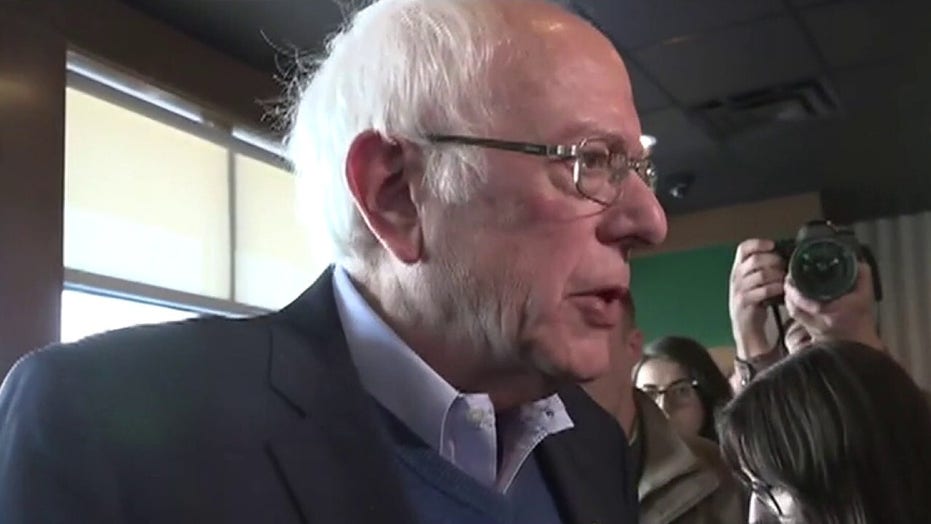 Former Secretary of State John Kerry was reportedly overheard in a hotel restaurant Sunday warning of the very real "possibility of Bernie Sanders taking down the Democratic Party -- down whole," according to an NBC News report that sent shockwaves through an already-fractured liberal constituency bracing for a potentially historic Sanders win in Monday's pivotal Iowa caucuses.

Kerry, in the Renaissance Savery Hotel in Des Moines, Iowa, on the eve of the caucus vote, also reportedly remarked that "maybe I'm f---ing deluding myself here," but that he could conceivably launch a run for president now that donors "have the reality of Bernie" surging in the polls.

Kerry, who is in town as a Joe Biden surrogate, added that donors such as venture capitalist Doug Hickey would have to "raise a couple of million," and that he would need to leave the board of Bank of America and stop giving paid speeches.

Immediately after the report broke, Kerry fired off a tweet with an uncharacteristic expletive, as he didn't outright deny that he had been overheard by the reporter saying Sanders posed an existential threat to the Democratic Party.

He did deny saying he could run or was running for president.

INSIDE SANDERS' IOWA SURGE -- COULD THE FAR-LEFT DEMOCRATIC SOCIALIST BE THE NOMINEE?

"As I told the reporter, I am absolutely not running for President," Kerry wrote on Twitter. "Any report otherwise is f---ing (or categorically) false. I’ve been proud to campaign with my good friend Joe Biden, who is going to win the nomination, beat Trump, and make an outstanding president."

Kerry then quickly deleted the tweet and reposted it without the profanity.

He separately told NBC News:  "This is a complete and total misinterpretation based on overhearing only one side of a phone conversation. A friend who watches too much cable called me wondering whether I’d ever jump into the race late in the game if Democrats were choosing an unelectable nominee. I listed all the reasons I could not possibly do that and would not -- and will not under any circumstances -- do that."

Incredulous commentators and reporters faulted Kerry for the blunder, even as they recognized that his apparent panic was emblematic of the state of the establishment Democratic Party.

"I don't know who needs to hear this, but the lobby of the Renaissance Savery in Des Moines the day before the Iowa caucuses is *not* the place to have private conversations," said Brianne Pfannenstiel, a reporter with the Des Moines Register.

Meanwhile, in an exclusive interview with Fox News' Sean Hannity during the Super Bowl LIV pregame show, President Trump asserted that the Democratic National Committee (DNC) was "rigging the election again" against "crazy Bernie,' after the DNC announced it would change debate rules in a way that would help Mike Bloomberg appear on stage.

Trump also warned that the left-wing of the Democratic Party is insurgent, and would soon unseat establishment figures. Sanders is backed by prominent far-left-wing Democrats including Reps. Alexandria Ocasio-Cortez, D-N.Y., and Rashida Tlaib, D-Mich.

At the same time, Trump made clear he had no love for more established Democratic insiders, either, remarking that former New York City Mayor Michael Bloomberg is quite short.

As the drama unfolded, Democratic presidential candidates hustled across the state on Sunday trying to fire up voters and make one last appeal to those struggling to make a final decision about their choice in the crowded field.

Campaigns and voters acknowledged a palpable sense of unpredictability and anxiety as Democrats begin choosing which candidate to send on to a November face-off with Trump.

The Democratic race is unusually large and jumbled heading into Monday’s caucus, with four candidates locked in a fight for victory in Iowa and others still in position to pull off surprisingly strong finishes. Many voters say they're still weighing which White House hopeful they'll support.

“This is going to go right down to the last second,” said Symone Sanders, a senior adviser to the Biden campaign.

Many campaigns were looking to a final weekend poll to provide some measure of clarity. But late Saturday night, CNN and The Des Moines Register opted not to release the survey because of worries the results may have been compromised.

New caucus rules have also left the campaigns working in overdrive to set expectations. For the first time, the Iowa Democratic Party will release three sets of results: who voters align with at the start of the night; who they pick after voters supporting nonviable candidates get to make a second choice; and the number of state delegate equivalents each candidate gets.

The new rules were mandated by the Democratic National Committee as part of a package of changes sought by Sanders following his loss to Hillary Clinton in the 2016 presidential primaries. The revisions were designed to make the caucus system more transparent and to make sure that even the lowest-performing candidates get credit for all the votes they receive.

But party officials in Iowa and at the DNC have privately expressed concerns that but multiple campaigns will spin the results in their favor, potentially creating chaos on caucus night.