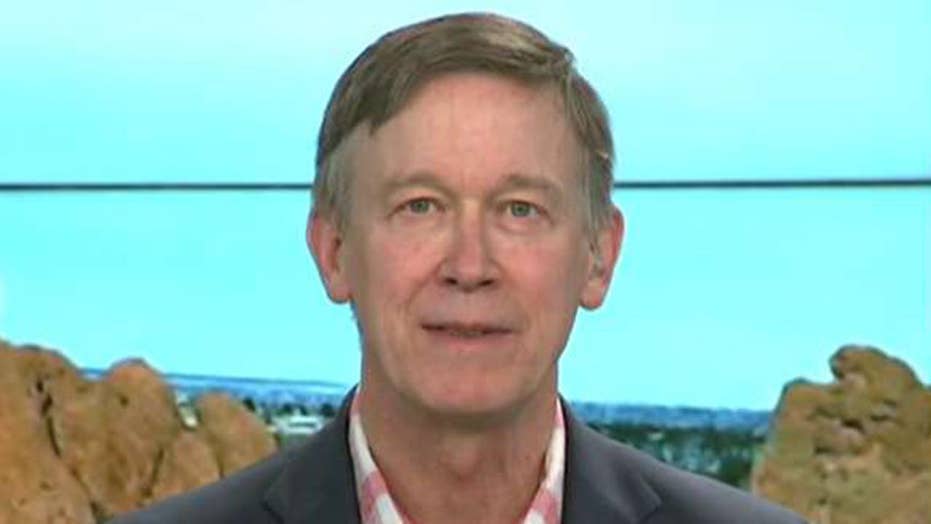 Is Gov. Hickenlooper looking ahead to 2020?

As many as 30 Democrats are considering 2020 presidential bids, including Colorado Governor John Hickenlooper who recently indicated he is 'leaning strongly' toward announcing a bid.

John Hickenlooper, the former Democratic governor of Colorado, is expected to announce plans next week to enter the Democratic primary for president, Fox News has learned.

Hickenlooper’s team has been granted a city permit to hold an event at Denver’s Civic Center Park on Thursday, according to paperwork filed with the city. Andy Boian, an informal adviser to Hickenlooper, told Fox News the event will be a presidential announcement.

Still, a Hickenlooper spokeswoman, Lauren Hitt, told Fox News on Friday that Hickenlooper "has not made a decision yet."

"It's not secret that he's been thinking about it and that we've been pulling together various pieces in case he gets to yes, but he has not decided yet,” Hitt said.

There is symbolism in the event site: it sits smack between his former offices of mayor of Denver and governor of Colorado.

Hickenlooper, who served as governor from 2011 to 2019, teased a future announcement on Thursday night by posting a throwback picture and quipping, “Unreleased John Folkenlooper EP dropping soon.”

Should he enter the race, Hickenlooper, who lacks the national recognition of others in the contest, would join a crowded Democratic primary battling for the chance to take on President Trump in 2020.

Hickenlooper prides himself on reaching across the aisle, and has worked together on issues with former Ohio Gov. John Kasich, a Republican. He was on 2016 Democratic nominee Hillary Clinton's vice presidential shortlist before she chose Sen. Tim Kaine of Virginia.

Stoking speculation about his plans, Hickenlooper has traveled to early voting states of Iowa, New Hampshire and South Carolina. A former brewpub owner, the former govenor has served up beers and appeared at breweries on recent trips.

“The more and more I travel, I see that there is an appetite for a leader who not only talks about progressive policies, but who has a proven track record of enacting them,” Hickenlooper said in a statement to Fox News last month.

Earlier Wednesday, another Democratic governor, Jay Inslee of Washington State, announced plans to seek the Democratic nomination, saying he would put the issue of climate change at the center of his campaign.