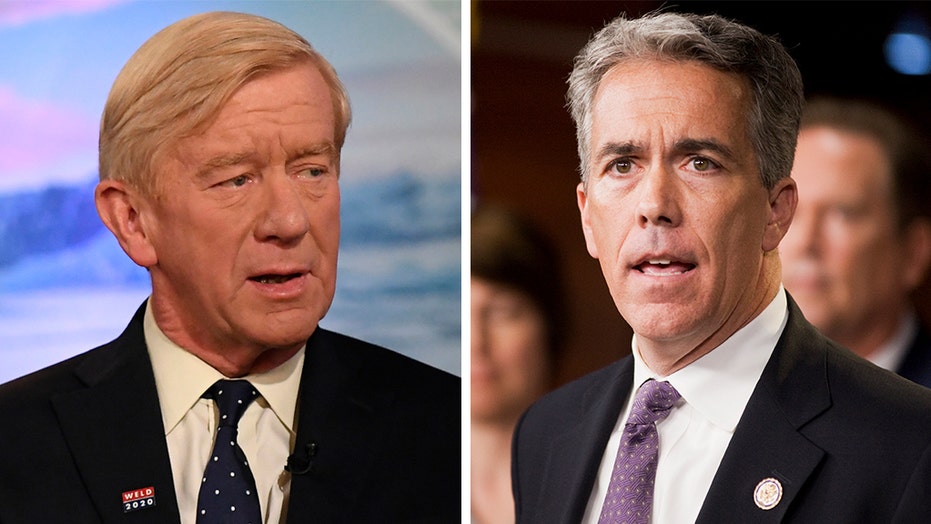 But mainly, they took aim at the president.

Former Illinois congressman Joe Walsh and former Massachusetts Gov. Bill Weld participated in the first GOP primary debate ahead of the 2020 presidential elections. The debate was hosted by Business Insider at its New York City headquarters.

Trump and another of his GOP challengers, former South Carolina Gov. Mark Sanford, both declined to attend the debate, which was not sanctioned by the national Republican Party.

Right from the start, both candidates who did take the stage focused on the president.

"Donald Trump is unfit," Walsh said in his opening statement. "He lies every time he opens his mouth. He can't put anyone's interests ahead of his own."

"I can't debate Bill Weld," he added. "I have respect for Bill Weld. We've got to bring the country together."

The candidates spoke about fiscal conservatism and the U.S. deficit, which topped $1 trillion -- the highest it has been in seven years.

"There's no such thing as government money," Weld said. "It's taxpayer money. There's nobody looking out for the taxpayers."

Walsh went on to say, "I will probably say too much tonight and my campaign manager will scold me. ... It's not about the issues, it's about Trump."

"This uncertainty that this president has unleashed -- he wakes up every morning, you don't know who the hell he's going to attack with a tweet."

While the candidates were on the same page about Trump, they differed on whether they'd rejoin the Paris Climate Agreement if elected. Trump withdrew from the global agreement to combat climate change in 2017.

Walsh said he would not rejoin the pact, while Weld responded, "Immediately"

"I'm a big gun guy. I believe in the Second Amendment, plain and simple," he said. "The problem we have in the country are these mass shootings. There are a lot of things we need to look at... Our focus should be on [that] we don't want anyone who shouldn't have a gun to have a gun."

"[Take] the guns away by all means, before something happens there," Weld said, "and that will come closer to solving our problem than other solutions [that are] aimed not at that population but at everybody."

Walsh later called Trump a "horrible human being" and said the political system is "broken" and the country "very divided."

"When I say that publicly as a candidate, I believe most Republican voters privately believe that," he noted. "This campaign is about getting them to come out publicly."

The Republican Party brand "sucks," Walsh also said, "and it sucks because of him," referring to President Trump.

"We have to remember the president is a sick man," Weld said. "He's a malignant narcissist. He's not happy unless others are losing."

Trump is a "megalomanic, filled with fear" who has "profound autocratic tendencies," he added. "He's a direct threat to the Bill of Rights and the Constitution."

Both candidates agreed that the next president's job will be to reunite the country.

Walsh went on to call Trump's attacks on the media "abhorrent."

"He's not a president. He's a dictator," he said. "He doesn't respect the First Amendment. He doesn't even know what it is."

"He's just way out there," Weld said. "We've begun to see him come unglued," adding that the absence of Trump will "save us all."

OCTOBER DEMOCRATIC PRIMARY DEBATE TO BE HELD IN OHIO

Both Walsh and Weld noted that they would commit to using the White House press room and being transparent, and criticized Trump for not doing so.

"He's a child," Walsh said. "I'm pretty darn outspoken. I believe in total transparency and will invite the media to the White House all the time."

In the end, he wants to convey two things, Walsh concluded: "This country can't handle four more years of [Trump's] BS. The country will be endangered. Deep down, most Republicans know that. They're afraid to say it."

"He is the swamp," Walsh added, calling Trump the "most corrupt president we've had in this nation's history."

Weld would like to see "tried and true Republican conservative policies" deployed in Washington, D.C., he said, including "conserving the dignity of all Americans."

The U.S. is a "right of center country, not left of center like some of our European friends," he noted.

Walsh again criticized Trump during his final statement, saying the country put "an absolutely horrible human being in the White House."

"We have to do better than a president who lies to us every time he opens his mouth. He has zero respect for the rule of law. He's destroying the Republican Party," Walsh said.

Weld's team did not tweet live during the event.

The Republican National Committee (RNC) does not currently have plans to host official primary debates, and some states have canceled their caucuses and primaries. This is seen as a move to try and protect Trump from any challengers.