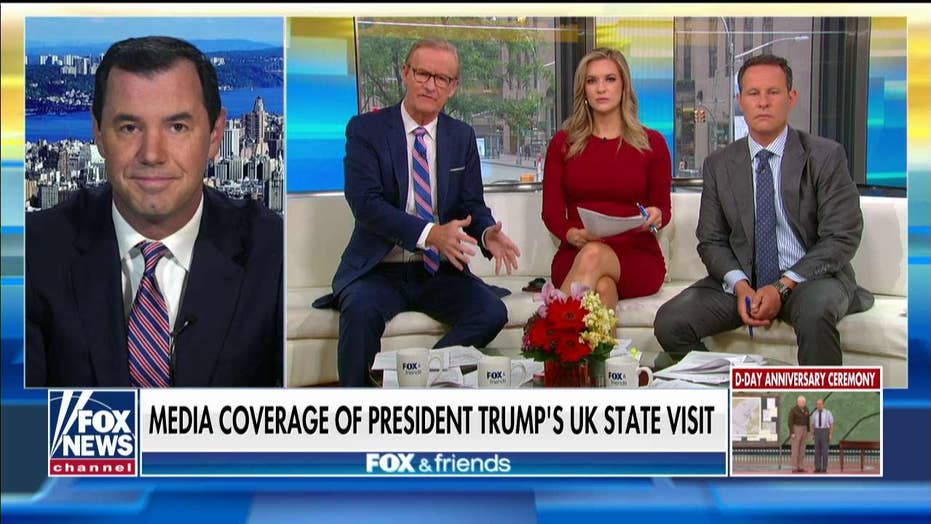 While President Trump has received largely positive local&nbsp;coverage of his visit to the United Kingdom, the American media has stayed focused on the negative, Joe Concha pointed out on "Fox &amp; Friends" Wednesday.&nbsp;​​​​​​​

While President Trump has received largely positive local coverage of his visit to the United Kingdom, the American media has stayed focused on the negative, Joe Concha said Wednesday on "Fox & Friends."

Concha, of The Hill and WOR radio, said the mainstream media's coverage has been consumed by the protests of Trump's visit, even though the demonstrations "are about a third as large" as last summer.

"All we're seeing, basically, is this Trump Baby Blimp, which is getting more coverage than the O.J. Bronco. I see this thing constantly. ... It's typical of what we've seen with Trump. If it's negative, that's the way we're gonna go," he said.

Concha compared the disparity in the coverage by the British and American media with the Jussie Smollett case, where the Chicago media was presenting a different picture than the national media.

Concha said Trump has come across as a "strong leader" and "competent" in his appearances alongside Prime Minister Theresa May and Queen Elizabeth II.

"We're getting way too many opinions based solely on speculation and how people perceive things instead of what people see on their screens," he said, arguing that many mainstream media pundits are characterizing Trump as a "buffoon on the world stage."

"Fox & Friends" contrasted the coverage by BBC and other outlets, which focused on Trump emphasizing the "friendship" between the U.S. and Britain, with CNN and MSNBC pundits bashing the president.

Concha highlighted that the centerpiece of the trip was to commemorate 75 years since the D-Day invasion by Allied forces in World War II.

"This is what we should be focusing on, the U.S. and U.K. coming together to defeat Nazi Germany. I'm not hearing a lot about that right now, I'm seeing Trump Baby Blimp," he said.

Concha said ratings are hurting at CNN and MSNBC because the coverage is "out of whack" and viewers "do not trust the messenger anymore."