Former Vice President Joe Biden on Wednesday complimented rival Bernie Sanders’ character and praised him for creating a “movement" after the Vermont senator announced he would suspend his Democratic presidential campaign.

Sanders suspended his campaign Wednesday morning, all but handing the nomination to Biden. The presumptive Democratic nominee responded by welcoming Sanders' supporters to join his effort to defeat President Trump in November.

"I know Bernie well. He’s a good man, a great leader, and one of the most powerful voices for change in our country. And it’s hard to sum up his contributions to our politics in one, single tweet. So I won’t try to," Biden tweeted Wednesday.

He added: “To Bernie and Jane, as friends, from Jill and me: You haven’t just run a political campaign; you’ve created a movement. And make no mistake about it, we believe it’s a movement that is as powerful today as it was yesterday. That’s a good thing for our nation and our future."

He added: ”We know how hard this is. You have put the interest of the nation – and the need to defeat Donald Trump – above all else. And for that we’re grateful. But we want you to know: we’ll be reaching out. You’ll be heard by me. As you say: Not me, Us."

Biden acknowledged that he still needs to gain the support of Sanders’ followers, but said those individuals are “more than welcome” and “needed” for him to defeat Trump in November. 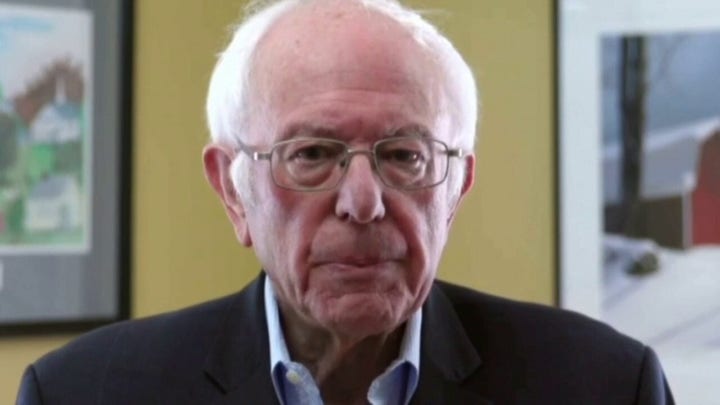 "And to Bernie’s supporters: I know that I need to earn your votes. And I know that might take time. But I want you to know that I see you, I hear you, and I understand the urgency of this moment,” Biden said. “I hope you'll join us. You're more than welcome: You're needed."

The former vice president went on to touch on policy issues important to Sanders and his supporters, saying his campaign would work to address the climate crisis, making college affordable and providing health care to all.

“Together we will defeat Donald Trump,” Biden said. “We will not just rebuild this nation – we’ll transform it. And I’m asking you to join me.”

Sanders first made the announcement that he was suspending his campaign during an all-staff conference call, which he followed with a formal livestreamed address to supporters.

“I have concluded that this battle for the Democratic nomination will not be successful,” Sanders told supporters. “I do not make this decision lightly.”

Sanders went on to say that Biden “will be the nominee,” but stressed the importance of continuing to win delegates for his own campaign so that he can exert “influence” on the party platform.

Calling it a "difficult and painful decision," Sanders stressed that "while this campaign is coming to an end, our movement is not.”