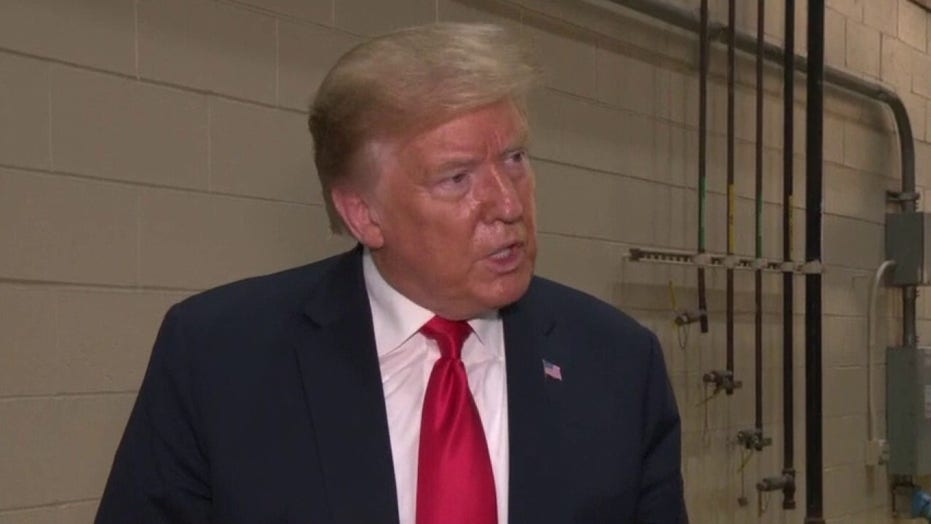 President Trump on Joe Biden's latest coronavirus gaffe: It's not a permissible error

It was hard to tell if Joe Biden or President Trump would be appearing in south central Pennsylvania on Thursday by the looks of crowds gathered near the presumptive Democratic nominee's campaign stop.

Pro-Trump supporters were out in force in Lancaster, holding Trump signs and chanting "Four more years!" and "U-S-A!" as they gathered roughly 100 yards from where Biden would be unveiling his proposals on health care.

At one point, a large semi-truck, bearing photos of Trump and Vice President Mike Pence, pulled up outside a local recreational center where a pro-Trump crowd was assembled.

The truck drove in between the Trump supporters and another group nearby that declared their support for the Black Lives Matter movement.

Biden traveled to the battleground state to meet with families who said they've benefited from the Affordable Care Act, the health care legislation also known as ObamaCare that was passed when Biden was former President Barack Obama's vice president. The campaign stop came on the same day the Trump administration was expected to urge the Supreme Court to invalidate the national health care law.

Biden also criticized Trump's notion that fewer tests would mean fewer cases of the coronavirus, as health experts have urged the importance of testing to limit the spread of the virus and identify those infected.

“He called testing, quote, a double-edge sword,” Biden said. “Let's be crystal clear about what he means by that. Testing unequivocally saves lives and widespread testing is the key to opening our economy. That's one edge of the sword. The other edge, he thinks that finding out that more Americans are sick will make him look bad.”

Biden also mistakenly claimed during the campaign stop that 120 million people had died from the novel coronavirus -- overstating the number by about 1,000 times.

The U.S. has seen at least 124,000 deaths -- not millions -- from COVID-19, according to data from Johns Hopkins University. Worldwide, more than 488,824 fatalities from the virus have been reported.

Biden's comments were immediately questioned by Republicans and the Trump 2020 Campaign team, which deemed the Democrat to be "very confused."

Meanwhile, the LNP newspaper, headquartered in Lancaster, said it was not permitted inside the building during Biden's appearance and suggested that the Democrat's campaign was limiting local media's ability to report on the visit. Lancaster's WGAL-TV claimed it was the only local television station in the Susquehanna Valley area to speak with Biden one-on-one.

Biden has recently started to make more public appearances after months indoors amid the coronavirus pandemic.

His campaign has so far focused on small group gatherings to limit the potential spread of the coronavirus, in contrast to President Trump, who recently held rallies in Tulsa, Okla., and Phoenix.

After the June 20 Tulsa event, dozens of Secret Service members were forced into quarantine because at least two of them had tested positive for the virus.

“Donald Trump needs to stop caring about how he looks to start caring about what America has happened to the rest of America," Biden said.