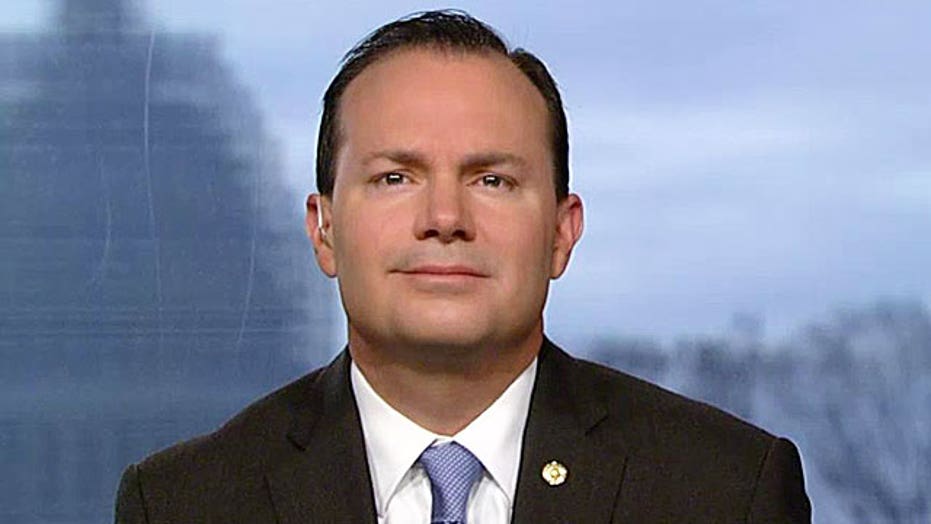 More than 30 years ago, Sen. Mike Lee (R-UT) used to pal around a lot with Josh Reid, the son of Senate Majority Leader Harry Reid (D-NV). Reid was a member of the House of Representatives back then and lived in the Virginia suburbs of Washington, DC. Lee’s Dad, Rex Lee, worked at the Justice Department and later served as U.S. Solicitor General under President Reagan.

Both Mormon families, the Reids and Lees sometimes spent time together. And one day, as a practical joke, Reid locked the younger Lee in the garage for a few minutes.

One wonders if Reid didn't wish he still had that option today.

Late Friday night, the Senate appeared poised to be out of session this weekend. Senators would pass a new interim spending bill so the government wouldn't shutter tonight and move to finish the broader funding bill - the so-called CRomnibus - Monday or Tuesday. In fact Senate Minority Leader Mitch McConnell (R-KY) had left for the night.

But Senate rules are crafted in such a way to respect the rights of the minority party. That means it sometimes just takes one senator or a handful of senators to upset the entire apple cart - even if most other senators disagree.

So shortly before 11 pm Friday, Reid came down to the floor to obtain what’s called “unanimous consent” (“UC,” in Senate terms) to send senators home for the weekend, conduct a procedural vote on the CRomnibus late Monday afternoon and take a final vote early next week.

It is said that paybacks are hell.

Lee immediately began to protest President Obama’s executive order over immigration. And Reid had an understanding with McConnell they’d pack up for the weekend and return Monday. Keep in mind that in the Senate, agreements between the Majority and Minority Leaders are practically hallowed accords.

“Right now we’re being asked to punt all of our activity until Monday at 5 pm. I don’t see any reason to do this,” Lee protested.

Remember, a sole objection can blow up any unanimous consent request in the Senate, despite what many others want to do.

When the Senate finally turned to the CRomnibus spending bill Friday, Reid did two things. First, he filled what’s called the “amendment tree” with his own, technical provisions to the CRomnibus. It’s the right of the Majority Leader to get first dibs at amending and filling that “tree” with his own provisions. That action effectively blocks other senators from trying to amend the bill. Certainly Lee and other conservative senators wanted to latch onto to the CRomnibus an amendment to block Mr. Obama’s immigration executive orders. By the same token, Sens. Elizabeth Warren (D-MA) and David Vitter (R-LA) crafted an amendment to yank out the controversial Wall Street “bailout” provision from the legislation. Reid also filed what’s called a “cloture petition.” Senate rules permit unlimited debate and filibusters. But the way around delays is by rounding up 60 senators to “invoke cloture” and cut off those debates and filibusters. Once cloture is invoked, a bill is on a glide path to a final vote.

By rule, one day must elapse between filing the cloture petition and when it “ripens” for a vote. So that means the Senate couldn’t vote to halt debate until Sunday. And even after cloture is achieved, senators have the right to burn off another 30 hours before final passage. That would mean the CRomnibus itself might not be eligible for an up or down vote until late in the day Monday.

With Reid filling up the amendment tree, Lee knew his childhood prankster nemesis had effectively locked him, this time, in the parliamentary garage.

“I would respectfully request for the Majority Leader to modify his request. And if he would modify his request to assure us that we would receive a vote on a spending limitation amendment that we could have in connection with a CRomnibus when we convene,” Lee asked.

Reid slammed the door and turned the key.

“I am unable to do that,” Reid replied.

“I object,” Lee said in turn, essentially locking all 100 senators in the Senate chamber throughout weekend.

And with that, Reid immediately ordered up a rare Saturday session of the Senate, hurtling toward a 1 am et Sunday vote to cut off the filibuster and the possibility of a 7 am Monday vote to pass the CRomnibus.

“It’s inconvenient for a lot of people but I’m sorry. We’re the Senate. We’ll have to rearrange our schedules for the weekend,” Reid said.

Lee may have been the one on the floor torching the understanding between Reid and McConnell. But he was just one member of a cadre which disintegrated the deal. Alongside Lee were Sens. Ted Cruz (R-TX), Jeff Sessions (R-AL) and Vitter. The move outraged members and staff from both sides of the aisle.

Several senior GOP sources described the maneuver as “ham-fisted” and “amateurish,” wondering openly what the insurrection meant for McConnell as Majority Leader next year. Would conservative members undercut McConnell in 2015?

The foursome wanted a vote on the CRomnibus to harness Department of Homeland Security funding for the immigration executive orders. Cruz said McConnell shouldn’t have signed onto the agreement with Reid.

“We made leadership fully aware for two days we were happy to consent and vote immediately on the CRomnibus if we got a vote on President Obama’s illegal amnesty,” said Cruz. “We accordingly exercised the leverage an individual senator has to secure a vote.”

To be sure, since Reid filled the amendment tree, there will be no vote on an immigration-related amendment at this point. But Cruz and others could make a point of order at the end of the process, potentially sufficing as the vote they seek.

I asked McConnell when he arrived at the Capitol Saturday if he was surprised the Gang of 4 tanked his agreement with Reid.

“Yeah, I was,” replied McConnell.

“I’ve been to this movie before. And I wouldn’t pay money to go see it again,” said Sen. Johnny Isakson (R-GA).

“You should have a goal in sight rather than just irritating a lot of people,” seethed Sen. Orrin Hatch (R-UT), the most senior GOPer in the body. “This is not an effective strategy.”

“We should fight when we can win,” added Sen. John Hoeven (R-ND).

The volatile state of affairs was not lost on Senate Chaplain Barry Black when he delivered the opening prayer for Saturday’s Senate session.

“Empower (senators) to make their decisions after weighing them on the scale of long-term consequences,” beseeched Black.

At one point, a scrum of reporters briefly descended on Cruz as he hustled into the Senate chamber. Sen. Claire McCaskill (D-MO) admonished the scribes from across the corridor.

Cruz lit into the GOP brass.

“Every Republican campaigned they would do everything to stop President Obama’s illegal amnesty. We didn’t honor those commitments,” he said.

Having Cruz back in the spotlight was like Christmas come early for Democrats. Senate Majority Whip Dick Durbin (D-IL) engaged Reid in a brief back-and-forth on the floor early Saturday afternoon.

“Last night the junior senator from Texas came to the floor. Is he part of the group that is objecting on moving forward on the CRomnibus bill?” queried Durbin.

“It appears so,” said Reid.

“This is the same senator who shut down the government last year in protest over the Affordable Care Act?” continued Durbin.

So with the Senate meeting Saturday, Reid used the time to tee up a host of President Obama’s nominations. The slate included Vivek Murthy to become Surgeon General. The GOP won’t be as game to advance these nominations next year. So the Gang of 4’s protestations over immigration on the CRomnibus actually appeared to enhance the chances of the Senate approving them before Democrats cede control to Republicans. Democrats railed against Murthy’s stalled nomination this fall as the Ebola crisis deepened. Many Republicans object to Murthy because of his support for Obamacare (shock). In addition, the GOP and the National Rifle Association don’t like Murthy’s stance on firearms as a public health concern.

Reid filed for cloture to halt the filibuster on the CRomnibus Friday evening. By rule, one day must intervene before cloture is ready for a vote. So the Nevada Democrat planned to keep the Senate in session until that cloture petition matures petition Sunday morning…at 1 am et.

But there’s another issue. The House of Representatives narrowly vaulted a procedural hurdle on Thursday just to put the CRomnibus up for debate on the floor. Several sources noted that securing 60 votes in the Senate to stop debate on the CRomnibus was far from a done deal.

“This is not going to be your typical 55, plus five,” noted one senior aide. The remark reflected the 55 senators who caucus with the Democrats plus the five Republicans they must court for cloture.

There are lots of senators on both sides of the aisle who abhor the CRomnibus and may try to stop it overnight.

If the cloture vote goes south, everything disintegrates. The Senate can’t finish the CRomnibus. That means the House probably has to return to full session next week as both bodies struggle to forge a bill which can pass. At least they would have until Wednesday night, as both bodies approved a second, stopgap spending bill to avoid an immediate government shutdown.

But if the Senate secures 60 votes early Sunday morning, a possible Cruz point of order vote and final passage on the CRomnibus may not happen until sometime after 7 am Monday. Senate rules afford senators an additional 30 hours of debate after cloture. So, it's possible this saga could play out through the first of the workweek.

It’s enough to make people lose their holiday cheer, not that there seemed to be much of it going around the halls of Congress this year.

And besides the CRomnibus, work in the Senate is far from complete. It also faces of batch of nominations needing confirmation to say nothing of a terrorism risk insurance bill and tax break legislation.

“We could be in session next weekend, too,” proffered one senior aide.