Immigration and Customs Enforcement (ICE) on Friday increased the pressure on New York City's sanctuary policies -- putting out a list of illegal immigrant fugitives who have been released into the city despite requests from ICE to hand them over for deportation.

Acting ICE Director Matthew Albence presented the list to reporters at a press conference in New York where he spoke of the dangers of sanctuary cities -- in which jurisdictions ignore detainers issued by ICE for arrested illegal immigrants.

Those detainers are requests that ICE be informed of an illegal immigrant’s pending release from custody so they can be transferred to deportation proceedings. While the Trump administration has been warning of the dangers of such policies for months, it's a fight that has been brought into the spotlight by the murder of a 92-year-old woman, allegedly by an illegal immigrant sprung from custody in November after New York ignored an ICE detainer.

"Make no mistake – it is this city's sanctuary policies that are the sole reason this criminal was allowed to roam the streets freely and end an innocent woman's life,” Albence said.

The list of fugitives put out by ICE includes suspected illegal immigrants from Nigeria, Mexico, the Dominican Republic, Honduras, Guinea, Spain, and El Salvador. Those released have arrests for assault in the first, second and third degrees, attempted robbery, criminal possession of a weapon, gang assaults and other violent offenses.

ICE also issued a list of illegal immigrants currently in custody, who it says “may be released into New York communities” after they have served their sentences. Among the crimes for which those in custody have been charged include rape, murder and sexual assault against a child.

Mayor Bill de Blasio has defended the city’s sanctuary city policies, saying that it makes the city safer and noting that there are some crimes for which the city will cooperate with federal immigration enforcement.

“New York City has passed its own common-sense laws about immigration enforcement that have driven crime to record lows. There are 177 crimes under NYC law that trigger cooperation with federal authorities, if and when someone is convicted.,” he said. “That policy has kept us safe.”

But Albence cited statistics saying that last year ICE lodged 7,526 detainers via its New York field office. Those individuals accounted for 17,873 criminal convictions and 6,500 criminal charges. He went on to say that those charges and convictions include over 200 homicides, over 500 robberies, over 1,000 sexual offenses, over 1,000 weapons offenses, and over 3,500 assaults.

However, only about 10 detainers were honored by the city, officials said.

"Those who politicize this issue want you to believe that you have to choose between being an immigrant-friendly city and one that cooperates with ICE,” Albence said. “Again that is simply false. The only immigrants protected by such policies are those committing violence and dangerous offenses, often in the same communities these politicians are purporting to protect.” 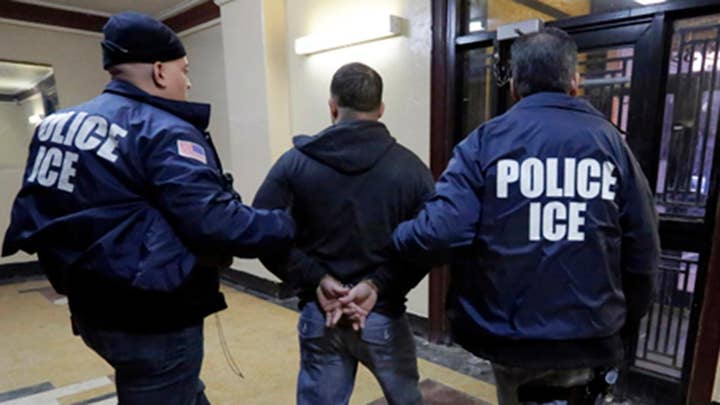 The press conference marks the latest push by the administration against such sanctuary cities. It has in the past put pressure on jurisdictions in North Carolina and Maryland for their policies. But the death of 92-year-old Maria Fuertes has fired up that debate again.

Reeaz Khan, an illegal immigrant from Guyana, is accused of attacking Maria Fuertes as she walked home on Jan. 6. Fuertes was reportedly found at 2 a.m. in 32-degree weather and near death on a sidewalk with her clothes pulled above her waist. She was taken to a hospital, where she died from injuries that included a broken spine, according to The New York Post. The Post cited law enforcement sources who said she had been sexually assaulted and strangled.

“It’s a completely preventable tragedy. Had they honored the [Immigration and Customs Enforcement] detainer this would never have happened,” Acting Homeland Security Secretary Chad Wolf said on “Fox & Friends” Friday. “So if they'd cooperated with ICE officials, the individual would never have been let out, wouldn't have committed this crime and we wouldn't even be talking about this.”

De Blasio has accused the Trump administration of using “scare tactics” and accused officials of “spreading lies about the good work of the NYPD.”

Those comments brought pushback from Sergeants Benevolent Association Vice President Vincent Vallelong, who told reporters that cops want to work with ICE, but are handcuffed from doing so.

“I can guarantee you every single one of our members wants to help them out, unfortunately, the way the policies are set up, they don't allow us to,” he said. “How do we have our own hands handcuffed to not be able to work with these guys?