Howard Kurtz says Sarah Sanders had a 'no win' job

'MediaBuzz' host Howard Kurtz says it's no secret that the media was not a fan of Sarah Sanders as White House press secretary.

Following the news that White House Press Secretary Sarah Sanders will step down from her post before the end of the month, "MediaBuzz" host Howard Kurtz called out the "graceless" attacks from some in the media.

A number of prominent media and political figures have not hidden their distaste for Sanders after her resignation, including CNN's April Ryan and former FBI Deputy Director Andrew McCabe. Ryan quipped that Sanders "suffers from lie-a-betes" and said her tenure in the White House was "fraught with sex, lies and videotape."

As the intermediary between President Trump and the press, Kurtz said, Sanders faced a difficult task.

"It's no secret that many journalists weren't happy with her in that job. It was a no-win job," he said during a Friday morning appearance on "America's Newsroom."

AINSLEY EARHARDT AND GUEST TAKE ON MEDIA'S TREATMENT OF SARAH SANDERS: 'HER KIDS READ THESE HEADLINES'

"She was caught in the constant crossfire between this president and the press."

He went on to discuss some of the negative treatment of Sanders, including her being kicked out of a restaurant in Virginia last summer. Kurtz added that many have criticized Sanders for abandoning the daily press briefing for the last 95 days, which he called "unfair."

"It was a decision by her boss who decided he would rather talk to reporters and spar with reporters every day rather than delegate it to a staff member," Kurtz said. 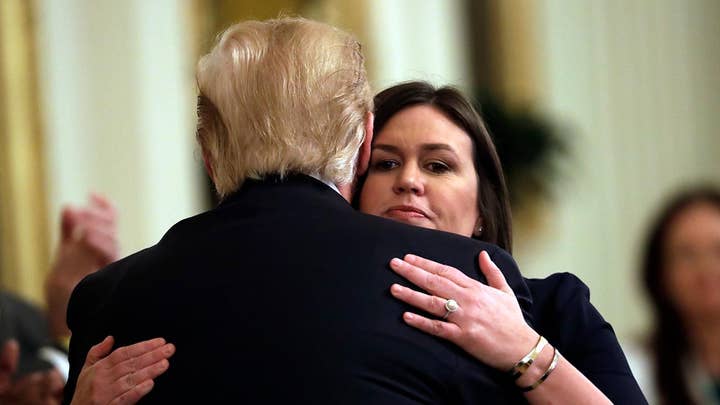 Kurtz acknowledged that Sanders admitted to a "slip of the tongue" when she claimed that "countless" FBI agents supported President Trump's firing of James Comey. Regardless, the media tended to use Sanders as a substitute for expressing frustrations with President Trump, Kurtz contended.

"They used Sarah Sanders as a punching bag because they often couldn't get to the president of the United States," he said.

Kurtz said Sanders may have had a bumpy ride, but it was certainly no easy feat to be in a tug-of-war between the media and President Trump's statements, which are often fired off in late-night tweets.

"She tried, and so many press secretaries in other administrations have been in this situation - not to personally vouch for what the president said that may have been exaggerated," he said. "That's a tough balancing act."