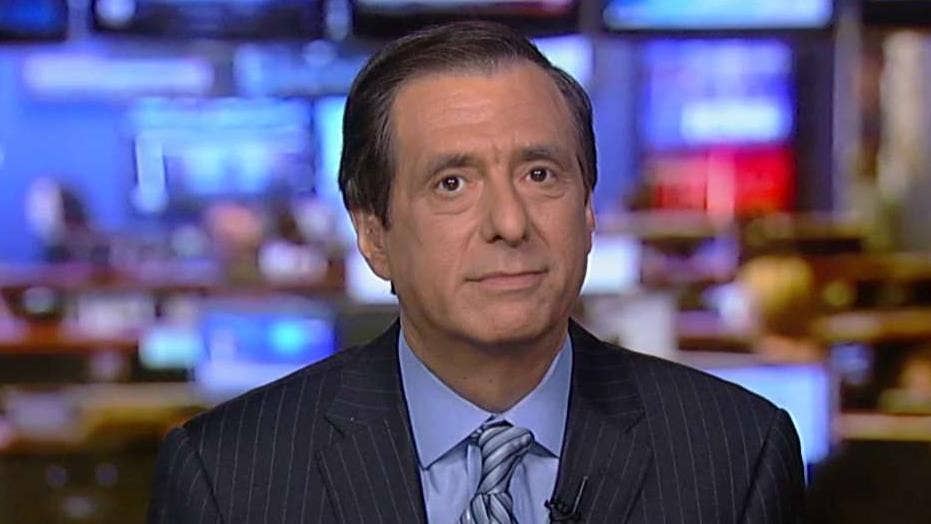 Democratic hopefuls adopting increasingly left-wing positions could leave themselves vulnerable to attacks from President Trump in 2020, according to “Media Buzz” host Howard Kurtz.

“Well, James Carville -- the old 'Ragin’ Cajun' -- offered this take to The New York Times: this is an election that Trump can’t win, but Democrats can lose,” Kurtz said.

The host also tackled the topic in a recent opinion piece, writing: “For those whose most fervent desire is to evict Donald Trump from the White House, there's growing concern that the Democrats are blowing it.

HOWARD KURTZ: ARE DEMOCRATS BLOWING THEIR CHANCE TO BEAT TRUMP?

"The two debates in Miami last week crystallized how most of the candidates are taking stances that would antagonize many millions of Americans once you get out of the liberal bubble. And the few contenders who are positioning themselves as left-of-center moderates are muting those views in the face of palpable progressive pressure.”

On "America's Newsroom," Kurtz added: “It’s standard political practice, as you know Bill, more Democrats to move left in the primaries then tack back to the center of the general election.

“But, look at what we have here: 10 candidates on the debate stage raising their hands supporting health services for illegal immigrants.”

Kurtz also noted Democrats not “taking on Julián Castro” when he “essentially calls for decriminalization of illegal border crossings” from Mexico.

GUTFELD: IT'S ALL DOWNHILL FOR BIDEN, HARRIS LIKELY TO BE DEM NOMINEE

Additionally, he pointed at Elizabeth Warren and Kamala Harris backing a Medicare-for-all plan that would “blow up, abolish, get rid of private health insurance for 150 million Americans.”

In his piece, Kurtz further noted the disparity between positions of Democratic candidates running in 2016 and 2020 elections: “in some instances, these are positions that no presidential candidate other than Bernie would have dared take in 2016. But now, the aspirants are torn between the burning desire to beat Trump and the overwhelming urge to be in lockstep with a ‘woke’ party. And those two imperatives are coming into direct conflict.”

Kurtz added that as recently as 2016, Hillary Clinton “drew flak for not having fully embraced a New York plan to give driver's licenses to illegal immigrants.”

“Everyone knows that the Democratic establishment is worried that Donald Trump will throw these and other positions back at whoever the nominee is in the Fall of 2020,” Kurtz said to Hemmer.

The media expert then discussed former Vice President Joe Biden's chances, before adding it is a risky proposition trying to predict who will emerge from the Democratic pack with so long left in the race.

“When a candidate like Biden offers more incremental change, essentially a return to the Obama era, he is mocked and dismissed for living in the past,” Kurtz wrote.

“Let’s not rush to judgment. Nobody is voting until next year. What we can say though, Bill, is that some of these positions—way out of the leftwing, things that nobody in the party would have said even in 2016—could be a vulnerability next year."