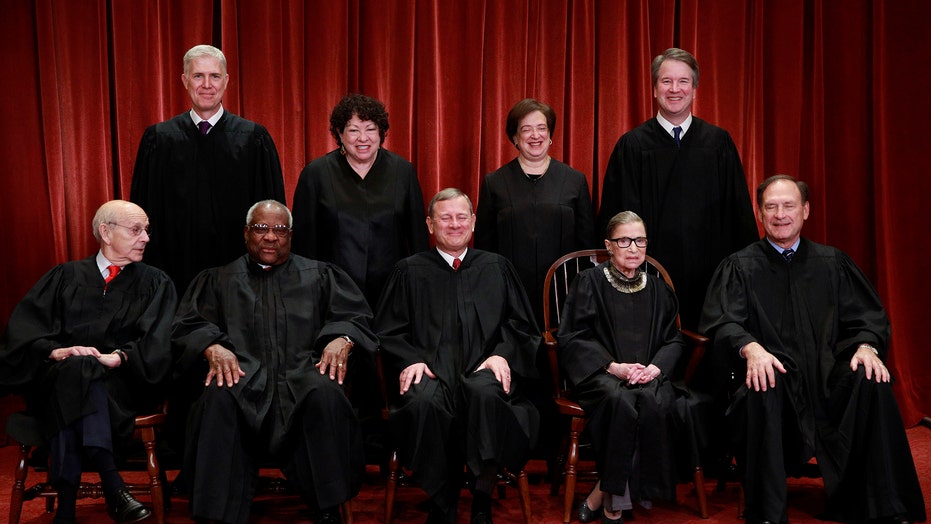 The fight over the seat of late Justice Ruth Bader Ginsburg has thrown the Supreme Court and its current tenuous conservative majority into focus once again, as Republicans have the chance to solidify the court's rightward lean by replacing Ginsburg with a nominee from President Trump -- a prospect that has roiled Democrats and led them to re-up their threats to "expand the Supreme Court" if they take back the Senate majority.

"Mitch McConnell set the precedent," Sen. Ed Markey, D-Mass., tweeted last week, referring to the Republicans' 2016 move to block then-President Obama's Supreme Court nominee during a presidential election. 'No Supreme Court vacancies filled in an election year. If he violates it, when Democrats control the Senate in the next Congress, we must abolish the filibuster and expand the Supreme Court."

What is court packing?

Such a move, known as court packing, would be aimed at tipping the balance of the Supreme Court back in favor of liberals if Democrats manage to take the Senate and the presidency. It has not been tried since President Franklin Delano Roosevelt threatened to expand the bench to 15 justices due to his frustration with the Supreme Court regularly thwarting his New Deal programs on constitutional grounds.

After the court stopped nearly uniformly ruling against Roosevelt's programs in the late 1930s, the president eased up on his threats, leaving the nine-justice bench intact.

The change in the Supreme Court's approach to Roosevelt's New Deal programs has been called "The switch in time that saved nine."

How would it work?

The Supreme Court and federal judiciary are written into the Constitution, but the legislative branch, through laws it passes that are signed by the president, is given broad authority on how to set up the judicial branch, including the number of seats on the Supreme Court.

"The judicial Power of the United States, shall be vested in one supreme Court, and in such inferior Courts as the Congress may from time to time ordain and establish," Article III, Section 1 of the Constitution reads.

The Judiciary Act of 1789 established the first Supreme Court with six total justices. The number of justices changed several times in the early years of the republic, including in 1801, as the Federalist majority in Congress and Federalist President John Adams removed a seat on the Supreme Court so incoming Democratic-Republican President Thomas Jefferson couldn't fill a vacancy.

Adams also rushed to fill federal courts with Federalist judges in his last days in office, appointing what were termed "midnight judges." One such appointment of a Washington, D.C., justice of the peace eventually led to the landmark Supreme Court case Marbury v. Madison, which is known for establishing federal judicial review but fundamentally ruled that new Secretary of State James Madison was required to deliver the Adams-appointed justice of the peace his commission (though the court refused to order that Madison do so because the lawsuit was brought under an unconstitutional statute).

The number of Supreme Court justices has remained constant at nine since the Judiciary Act of 1869. If congressional Democrats wanted to change that, all they would have to do is pass another Judiciary Act.

What's the chance it would pass Congress?

Despite the outrage felt by Markey, Senate Minority Leader Chuck Schumer, D-N.Y., and others about the Senate Republicans' plan to plow ahead with confirming a Trump Supreme Court nominee, a Democratic majority would likely have trouble getting all of its members to go along with a court packing scheme.

Some Democrats like Sen. Joe Manchin of West Virginia have resisted calls from their own party to get rid of the legislative filibuster if Democrats take the majority -- the filibuster is simply a Senate rule and nothing that's required by law or the Constitution. Moderate Democrats would likely be even more reluctant to upend a law with over 150 years of precedent to change the number of justices on the Supreme Court.

Additionally, a new Judiciary Act would be a piece of legislation that a potential President Biden would need to sign.

It's unclear that the candidate who currently portrays himself as a unifier would go along with such a drastic plan. Nor is it clear that court expansion would be able to pass the House, which is more likely than not to remain in Democratic hands but also has its fair share of Democratic members in swing seats who might have trepidations about fundamentally altering the longstanding structure of a co-equal branch of government.

Nevertheless, Schumer has emphasized that should Democrats seize the Senate and the White House, "nothing's off the table" for what Democrats could do in retaliation for the Senate moving ahead with a Trump Supreme Court nominee. He said forcefully Monday that Republicans should not be the ones to replace Ginsburg.

"The stakes of this election, the stakes of this vacancy, concern no less than the future of fundamental rights for the American people... If you care about these things and the kind of country we live in, this election and this vacancy mean everything," Schumer said. "By every modicum of decency and honor, Leader McConnell and the Republican majority have no right to fill it."