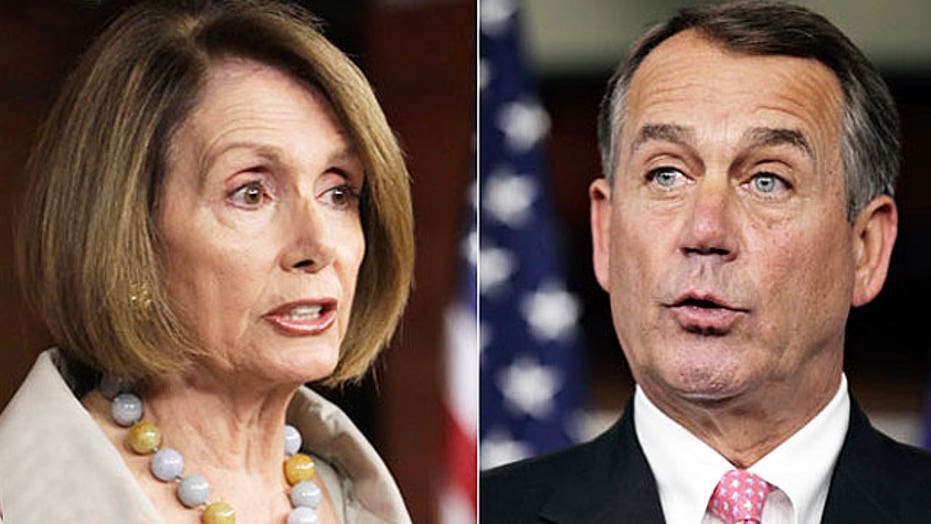 Will Pelosi play ball with Boehner on spending deal?

Political Insiders on whether a compromise can be brokered before deadline

House Republican leaders are preparing to unveil a critical spending bill, and could be forced to rely on Democratic votes to avert a partial government shutdown.

Current government funding lasts through Thursday at midnight, and House leaders are rushing to put forward a new funding bill. The complication is that conservative lawmakers want to use the debate as leverage to de-fund or otherwise undermine President Obama's newly announced executive actions on immigration.

Last week, the House approved a bill that aims to nullify those actions. But the legislation is sure to die in the Democrat-controlled Senate, leaving some Republicans complaining that the House is not doing all it can to combat the president's immigration plan.

He complained that the House plan, which reportedly includes a $1.1 trillion spending bill, would "allow the president to move money around and fund his executive amnesty program" -- and urged the House to do more.

Boehner is now faced with a delicate balancing act.

The likely plan is to put forward a bill funding most of the government through fiscal 2015, but also a proposal funding the Department of Homeland Security and its immigration-related activities through February or March. That would ensure a new debate over funding for the immigration plan in early 2015, when Republicans control both chambers of Congress.

But Boehner can only afford to lose 17 House Republicans before he needs help from the other side on this week's vote. He could easily lose that many -- and more -- on this bill, leaving him looking to House Democratic Leader Nancy Pelosi for support.

Pelosi, D-Calif., has said her side would be willing to help, but has signaled she may make some demands.

The spending bill is expected to be filed either Monday or Tuesday, but controversial policy riders continue to be the main issue of disagreement between the two sides.

The tentative plan is for the House Appropriations Committee to release the plan and tee it up for the floor on Wednesday. If it proceeds, that would allow for Senate action either late Wednesday or Thursday, before a midnight deadline. The House vote, though, could slip.

Appropriations Committee aides decline to furnish details of the House bill but the parameters of the measure were taking shape after lengthy negotiations last week and over the weekend.

The legislation would finance the day-to-day operations of every Cabinet department, provide more than $5 billion of Obama's $6.2 billion request to combat Ebola at home and abroad, and provide more than $70 billion to conduct overseas military operations, including funds to fight Islamic State extremists.

The bill freezes funding for core government accounts at slightly more than $1 trillion, but the total cost will approach $1.1 trillion after war funding and emergency money to fight Ebola is added in. Veterans' health programs get increases, but large portions of the budget are mostly frozen in place.

GOP leaders are loath to pursue another major standoff that risks a partial government shutdown, despite pressure from some conservatives.

They could have a couple bail-out options -- approving a short-term spending bill for a few days to buy time; or passing a straight spending bill that renews funding at last year's levels through the end of fiscal 2015, passed with significant Democratic support.

The latter scenario, though, could cause major headaches for Boehner and trigger new internal calls by Republicans to challenge him in the new Congress.

Another wild card is what Senate conservatives like Sens. Ted Cruz, R-Texas; Mike Lee, R-Utah; and Sessions would do with a House-passed bill.

All three have pushed for an aggressive attack plan over Obama's immigration actions, which could give temporary legal status to up to 5 million illegal immigrants. If any chooses to filibuster, it could draw out the process, potentially pushing debate into the weekend -- requiring Congress to either pass a stopgap funding bill or risk at least a short partial shutdown.

So far, aides close to several GOP senators told Fox News they don't expect their bosses to fight in a way that runs past the deadline and risks a partial shutdown.

They suggest that the timing, with the Senate not expected to take a crack at the bill until Wednesday or later, makes it difficult to launch a major fight.

"It cuts against us," one Republican Senate aide said. "Leadership has played its hand very well."

Another top aide for a conservative senator said, "It's going to come down to how much the outside groups want to engage ... There's not a lot we can do."