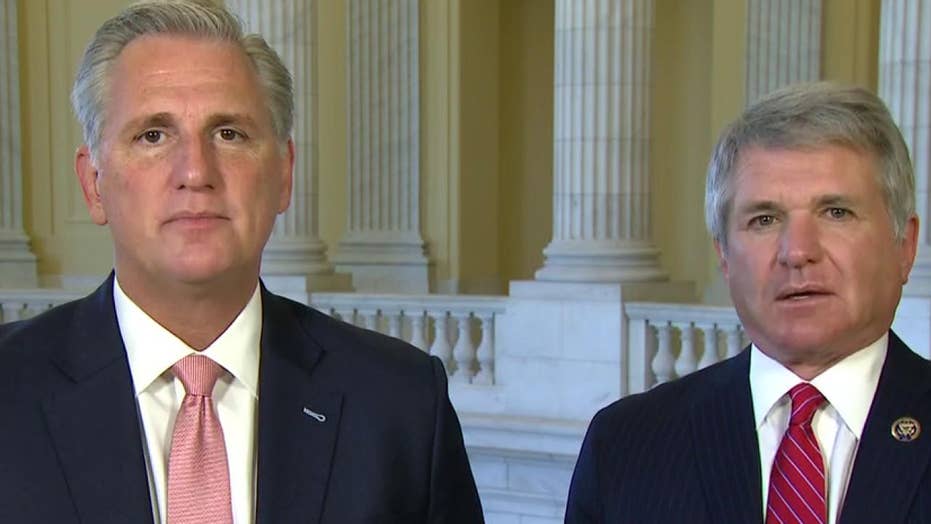 House Republicans Wednesday will release the results of their monthslong probe into the Chinese Communist Party (CCP) and how the U.S. can turnaround a "failed" engagement strategy that has put Americans' safety and prosperity at risk.

The China Task Force report, to be released in full later Wednesday, makes 83 key findings and 430 policy recommendations on how the U.S. can better combat the threat of the CCP, whose malign activities have gone unchecked for too long, the GOP leaders say.

"This report is the blueprint for bipartisan actions Congress and the Administration can take now to address the greatest national and economic security challenge of this generation," the task force report says.

REPUBLICANS UNVEIL NEW AGENDA IF THEY WIN BACK HOUSE

The recommendations include securing the medical supply chain by boosting U.S. production, allowing the Department of Defense to fund experimentation of emerging technologies to modernize the U.S. military faster and to require the Treasury Department to sanction China.

The report also calls for the U.S. to secure a bilateral free trade agreement with Taiwan, to require heightened scrutiny of Chinese investment in U.S. companies, and to cut off material support for CCP military-industrial base companies.

UNITED STATES - SEPTEMBER 15: House Minority Leader Kevin McCarthy, R-Calif., along with House Republicans, conduct an event on the House steps of the Capitol to announce the Commitment to America, agenda on Tuesday, September 15, 2020. The plan outlines ways to restore our way of life, rebuild the greatest economy in history, and renew the American dream. (Photo By Tom Williams/CQ-Roll Call, Inc via Getty Images)

The China Task Force, comprised of 15 GOP members, was formed in May to assess the threat of the Chinese Community Party and come up with legislative solutions on how to combat the risks. The work has taken on greater importance during the coronavirus pandemic that originated in China before killing more than 1 million people worldwide.

In the aftermath of shortages of personal protective equipment in the United States, the task force has honed in on securing the medical and national security supply chains through targeted tax incentives to speed up production of critical goods. The GOP representatives also call for providing a safe harbor for Hong Kong refugees and to determine whether the crimes against the Uyghurs, a persecuted ethnic minority in China, amount to genocide.

Since May, the task force has met with 125 people, including policy experts, business leaders and bipartisan current and former administration officials.

The U.S. established diplomatic relations with the People's Republic of China more than 40 years ago. In an effort to expand the bilateral economic relationship and encourage greater engagement, the U.S. has often turned a "blind eye" to the CCP's human rights violations, economic malfeasance, expansionist aggression and the hostile communist ideology that drives the bad behavior, the report says.

"This strategy has, simply put, failed," the task force concluded in its executive summary.

In the last year alone, the CCP has violated an international treaty and violated Hong Kong's civil liberties; continued its oppression of Uyghurs and Tibetans; increased its military buildup; violated other nations' sovereignty; and silenced doctors and suppressed medical information warning of the coronavirus outbreak.

"This series of wakeup calls has revealed how CCP ideology is undermining the core principles of the international system and putting Americans' safety and prosperity at risk," the executive summary said. "Leniency and accommodation of the CCP and its oppressive agenda is no longer an option. To preserve democracy and freedom around the world, the U.S. must act decisively with our allies to regain the initiative."