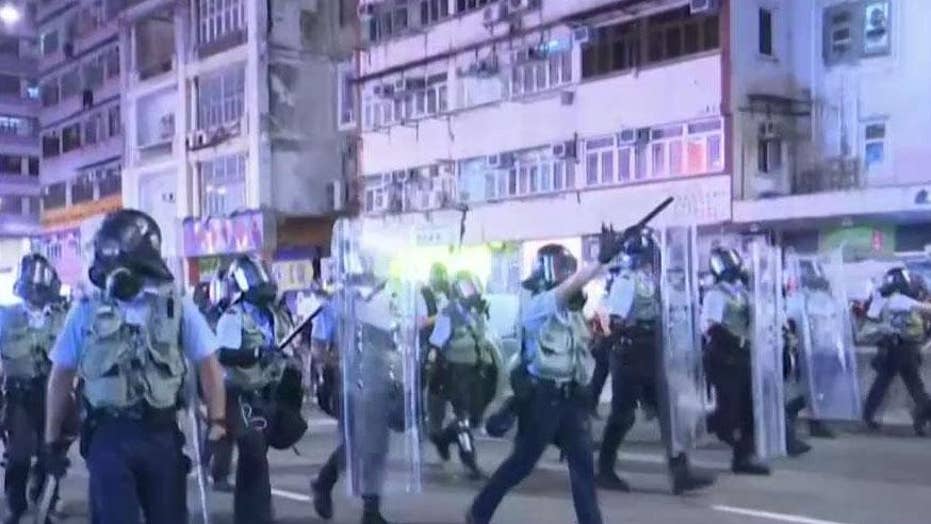 Riot police march in the streets of Hong Kong as demonstrators gather for another night of protests.

U.S. officials warned Wednesday that China could be preparing for a Tiananmen Square-style crackdown in response to Hong Kong protests, as footage captures the menacing movement of military convoys near the border and Beijing ratchets up its rhetoric toward the demonstrators.

“30 years after the Chinese Communist Party’s brutal massacre of peaceful democratic protesters in Tiananmen Square, we are concerned that China would consider again brutally putting down peaceful protests,” they said. “We urge China to avoid making such a mistake, which would be met with universal condemnation and swift consequences.”

The lawmakers pointedly referenced the bloody 1989 massacre, where student-led pro-democracy protests in Beijing's Tiananmen Square were put down by the ruling Communist Party, leaving hundreds dead.

Engel and McCaul added that the committee has asked Beijing to “cease encroaching on Hong Kong’s autonomy,” noting that it is “Beijing’s actions that are at the root of the frustration among the people of Hong Kong.”

“No foreign powers are fomenting this dissent. It is the result of Beijing’s successive violations of their commitment to honor the will of the people of Hong Kong,” they continued, maintaining their “deep respect” for the protesters and their “clear desire for freedom, democracy, and the rule of law.”

A LOOK AT KEY EVENTS IN THE 1989 TIANANMEN SQUARE PROTESTS

The stark warning comes amid mass protests in Hong Kong, urging democratic reforms and an investigation into police conduct. The demonstrations, which have been ongoing for more than two months, have raised concerns among U.S. officials about how far China might go in response.

On Tuesday, President Trump said that he's learned the Chinese government was sending its military to the Hong Kong border amid the mounting clashes between riot police and pro-democracy protesters, centered most recently at Hong Kong's massive international airport.

“Our Intelligence has informed us that the Chinese Government is moving troops to the Border with Hong Kong. Everyone should be calm and safe!” Trump tweeted. 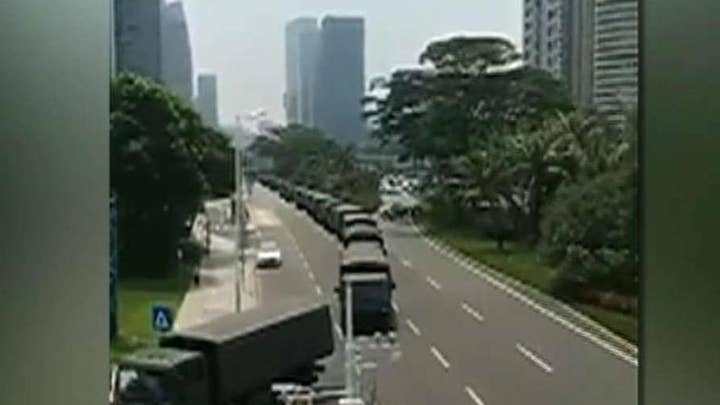 Satellite images on Tuesday showed that Chinese military forces were gathering near the Hong Kong border, as Trump stated. Footage showed a convoy of trucks in nearby Shenzhen rolling through the streets and amassing at a stadium, though the government reportedly described the movement as part of a drill.

Still, the military build-up signals a dramatic escalation, and what could be a turning point in the now-11-week-long protests. Beijing has let Hong Kong police take the lead in confronting the demonstrations, but on Tuesday, the Chinese government described the protesters as terrorists — a distinction that could pave the way for Beijing to directly intervene.

A State Department spokesperson told Fox News Wednesday that the U.S. is “deeply concerned” by reports of Chinese paramilitary movement along the Hong Kong border.

“The United States strongly urges Beijing to adhere to its commitments in the Sino-British Joint Declaration to allow Hong Kong to exercise a high degree of autonomy,” the State Department spokesperson said. “As the president noted, we urge all sides to engage peacefully and refrain from violence. We encourage China and all parties in Hong Kong to pursue a solution that respects the liberty of Hongkongers and Hong Kong’s high degree of autonomy, as enshrined in the Sino-British Joint Declaration.”

The State Department noted the importance of the Hong Kong government to “respect the freedoms of speech and peaceful assembly.”

“We condemn violence and urge all sides to exercise restraint and remain staunch in our support for freedom of expression and freedom of peaceful assembly in Hong Kong,” the spokesperson said, noting the demonstrations reflect the people of Hong Kong’s “broad and legitimate concerns about the erosion of Hong Kong’s autonomy.”

“We categorically reject the false charge of foreign forces as the black hand behind the protests,” they said. “The continued erosion of Hong Kong’s autonomy puts at risk its long-established special status in international affairs.” 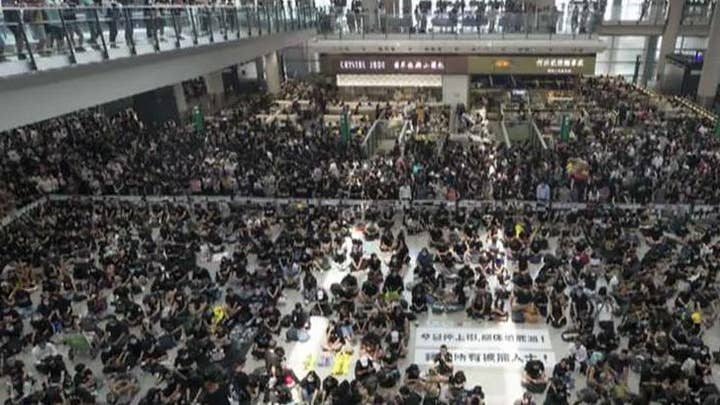 But a Chinese diplomat, State Councilor Yang Jiechi, accused the U.S. and other Western governments of “constantly fanning the flames of the situation in Hong Kong.”

Meanwhile, Hong Kong Chief Executive Carrie Lam and other Chinese officials have similarly claimed, without providing evidence, that “Western forces” are behind the protests. Last week, the head of the police union in China called for an investigation into the alleged U.S. role in the demonstrations and Chinese Foreign Ministry spokeswoman Hua Chunying pointed to “irresponsible statements” by U.S. politicians, suggesting they are looking to incite disorder and unrest in China.

On Tuesday, demonstrators shut down operations at Hong Kong’s airport for the second day in a row, flooding the main terminal. The airport, which is one of China’s largest economic hubs, was filled with approximately 10,000 protesters, drawing Hong Kong riot police to the scene armed with pepper spray and batons. The police clashed with demonstrators in violent scenes, eventually re-opening the airports.

Protesters are demanding that Lam step down and pull legislation that would allow the government to extradite criminal suspects to mainland China, where they would likely face torture or unfair politically charged trials. Recent demonstrations have called for an independent inquiry into the city’s police and its alleged abuse of power.

Lam said Tuesday that dialogue would begin only when the violence stopped. She reiterated her support for the police and said they have had to make on-the-spot decisions under difficult circumstances, using "the lowest level of force."