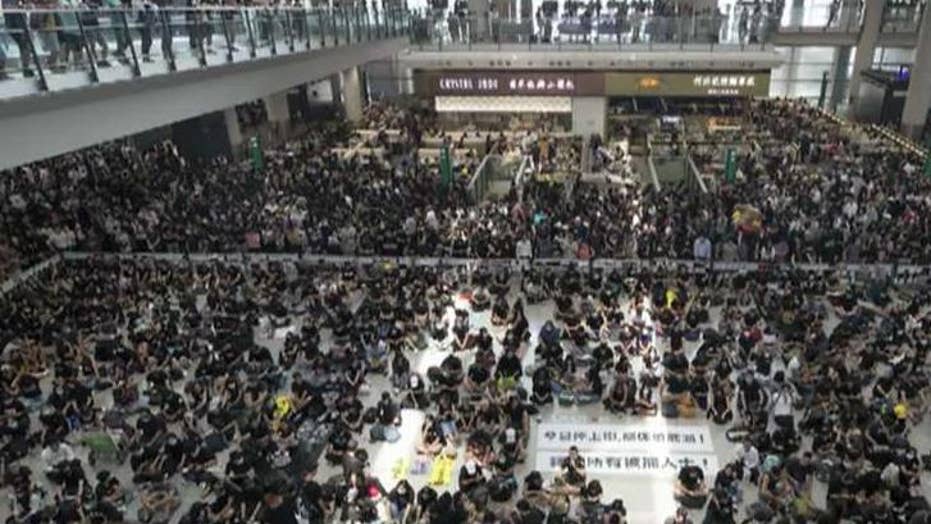 Officials in China and Hong Kong express concern that Hong Kong is heading for a 'point of no return' unless the Chinese government intervenes; Greg Palkot reports.

Pro-democracy protesters clashed with riot police at Hong Kong's airport Tuesday night, after demonstrators shut down operations at the airport for the second straight day, flooding the main terminal in an attack likened by Chinese officials to "terrorism".

Some protesters detained, harassed and assaulted a traveler and a journalist, and obstructed ambulance workers from taking the two men to the hospital, officials said, adding that other protesters attacked a police officer and snatched a baton from him.

A government statement condemned the acts, saying they "have overstepped the bottom line of a civilized society."

Earlier in the day, authorities were forced to cancel all remaining flights at one of the busiest airports in the world from 4:30 p.m. local time, just one day after protesters were able to successfully shut down all operations.

Meanwhile, paramilitary police were assembling across the border in the city of Shenzhen for exercises that some saw as a threat to increase force against the protesters, while Hong Kong's leader, Carrie Lam, warned protesters that violence would push it "down a path of no return". President Trump on Tuesday afternoon tweeted that U.S. intelligence "has informed us that the Chinese Government is moving troops to the Border with Hong Kong. Everyone should be calm and safe!"

Policemen in riot gear arrest a protester during a demonstration at the airport in Hong Kong, Tuesday, Aug. 13, 2019. Chaos broke out at Hong Kong's airport as riot police moved into the terminal to confront protesters who shut down operations at the busy transport hub for two straight days.  (AP)

JAMES CARAFANO: WHAT HONG KONG UNREST TELLS US ABOUT CHINA'S PLANS FOR REST OF THE WORLD

For more than two months, Hong Kong has experienced mass protests urging democratic reforms and an investigation into police conduct. The shutdown of one of the world's busiest airports added to what authorities say is already a major blow to the financial hub's crucial tourism industry.

Protesters surround banners that read: "Those on the street today are all warriors!" center top, and "Release all the detainees!" during a sit-in rally at the arrival hall of the Hong Kong International Airport in Hong Kong on Monday. (AP)

The protests early on were staged in specific neighborhoods near government offices. The airport protest, however, had a direct impact on business travel and tourism. Only a few flights were able to take off early Tuesday, prompting some tourists to vow never to travel from Hong Kong.

"I don't think I will ever fly to Hong Kong again," one traveler from South Africa told The Associated Press.

Policemen in riot gear arrest a protester during a demonstration at the airport in Hong Kong, Tuesday, Aug. 13, 2019. (AP)

Protesters are demanding that Hong Kong leader Lam step down and pull legislation that would allow the government to extradite people to Mainland China, where they would likely face torture or unfair politically charged trials. Recent demonstrations have called for an independent inquiry into the city’s police and its alleged abuse of power.

Lam said Tuesday that dialogue would begin only when the violence stopped. She reiterated her support for the police and said they have had to make on-the-spot decisions under difficult circumstances, using "the lowest level of force."

Protester holds up a placard during a sit-in protest at the arrival hall of the Hong Kong International Airport, a major hub in Asia, in Hong Kong on Aug. 12, 2019. (AP)

Chinese officials have called the movement an “existential threat” and compared it to “terrorism.”

Some protesters have thrown bricks, eggs and flaming objects at police stations and police said they arrested another 149 demonstrators over the weekend, bringing the total to more than 700 since early June. Police say several officers have suffered burns, bruises and eye damage inflicted by protesters.