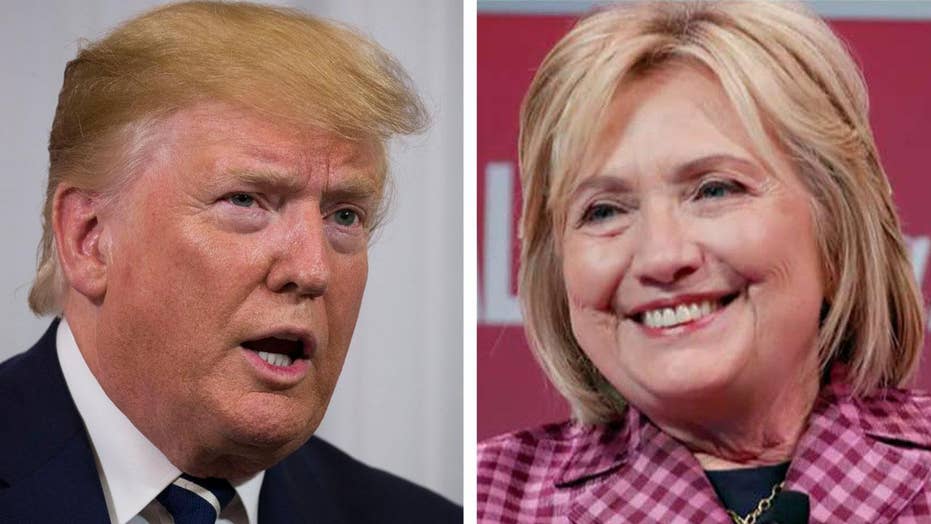 "If you take the time to read the Mueller report, actually read it ... you come to two inescapable conclusions," she said while speaking at her alma mater Wellesley College.

Those conclusions, she said, were that Russia conducted a "sweeping" attempt to interfere in the 2016 election and that "obstruction of justice occurred." "You cannot read the report, chapter and verse, fact after fact, without reaching those conclusions," she said, according to a video posted by The Hill.

Although Clinton has called out Russian interference as a reason for her 2016 loss, Saturday's comments appeared to be the first time she said the Mueller report definitively showed obstruction.

ALAN DERSHOWITZ: EX-UK SPY CHRISTOPHER STEELE MUST BE ASKED THESE KEY QUESTIONS BY US INVESTIGATORS

Mueller, during a press briefing in May, stopped short of exonerating Trump of that allegation but refused to prosecute him at least partially because of a Justice Department rule against charging a sitting president.

After the report's release, Republicans like Trump declared victory while his campaign claimed the report fully exonerated the president. Trump, who has decried the investigation as a "witch hunt," prompted further Democratic inquiry when he granted his attorney general the ability to declassify intelligence as he looked into the probe's origins.

Although Republicans mostly stood by the president, Rep. Justin Amash, R-Mich., called for the president's impeachment and accused him of obstructing justice.

Those concerns included an incident when the president told forrmer White House counsel Don McGahn to fire Mueller. "McGahn did not carry out the direction, however, deciding that he would resign rather than trigger what he regarded as a potential Saturday Night Massacre,” the report said, referring to a similar event during the Nixon administration.

BARR COMPARES HIS RETURN TO DOJ TO D-DAY, LIKENS IT TO TRYING TO 'LAND WITHOUT GETTING SHOT'

After both McGahn and Attorney General William Barr refused to comply with subpoenas, House Democrats unveiled a resolution Thursday that would hold them in contempt and beef up Congress' investigatory authority.

Democrats also planned a new wave hearings on the issue and debated impeachment as a possible option after Mueller held a press briefing on the investigation. House Speaker Nancy Pelosi, D-Calif., who holds ultimate authority to initiate impeachment proceedings, disagreed impeachment but with reportedly House Judiciary Committee Chairman Jerrold Nadler, D-N.Y. that she wanted to see Trump in "prison."

The Trump administration has been able to scuttle Democratic investigations by invoking executive privilege but the party could further those efforts if it passed the contempt resolution introduced on Thursday. That resolution would give Democratic committee chairs like Nadler the ability to unilaterally initiate judicial proceedings in order to enforce subpoenas in court.