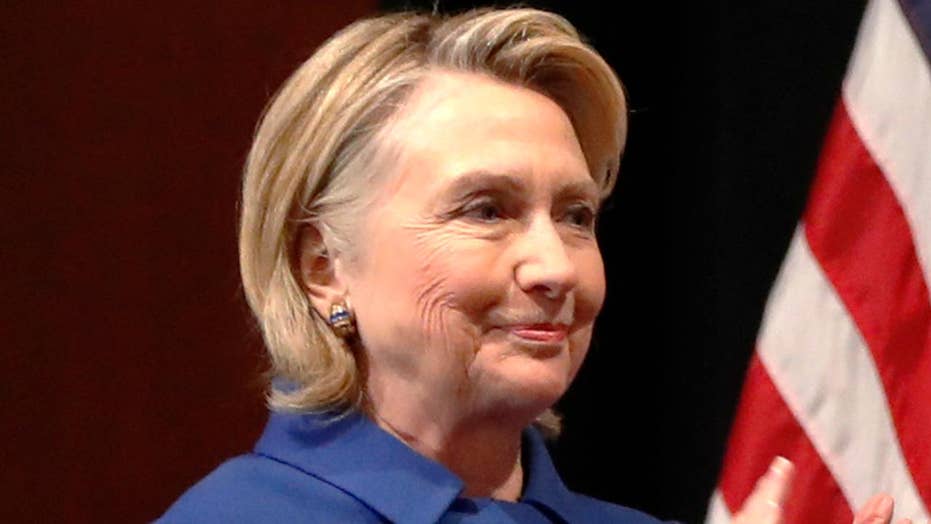 Hillary Clinton jokes while thanking elected women leaders: I can attest how 'likeable' you all are

Former Secretary of State Hillary Clinton on Monday swiped at critics and pundits who have been scrutinizing the “likability” of certain female politicians.

Clinton, the 2016 Democratic presidential nominee, made her comments during an appearance in Manhattan alongside New York Gov. Andrew Cuomo, and just days after Massachusetts Democratic Sen. Elizabeth Warren announced she was exploring the possibility of challenging President Trump in the 2020 election.

“There’s been a lot of talk recently whether our country is ready for women leaders and that really takes me back,” Clinton said during her speech at Barnard College. “Today, I want to thank all of you for your persistence.”

Clinton added: “I know many of you and can attest how smart, determined, effective, and, dare I say, likable you all are.”

Clinton’s comments come amid a slew of news stories and opinion pieces questioning how Warren can avoid falling into the same trap that befell Clinton during her presidential bids – pointing to the “likability” factor.

Politico ran one story quoting numerous Warren associates and advisers who – while dismissing the claims – said they were concerned the Massachusetts lawmaker would get lumped in with Clinton as someone who is cold and unlikable.

“Elizabeth is not that,” a onetime Warren adviser told Politico. “I don’t think it’s fair. I know her. I think she is a warm and affectionate person.”

Numerous other articles then complained that the debate is just sexist and that any vocal female politician gets lumped in as being unlikable.

“When women are successful in male-dominated fields, they are deemed less likable,” Sarah Sobieraj, an associate professor of sociology at Tufts University, told the Boston Globe. “The very fact that they are successful or knowledgeable is what makes them less likable.”

While Warren has tried to broaden her appeal – she even chugged a beer on Instagram – polling suggests she still has more work to do to connect with voters. A USA Today/Suffolk poll released in December showed her at a net negative, with more people opposing her candidacy than supporting it.

Still, Warren’s backers say once she hits the campaign trail in full, the likability issue – and comparisons with Clinton – will fall to the side.

“Once she’s on the stump and gets going on her economic message, she’s quite good … Hillary had three decades’ worth of animosity — it was just the way the world had treated her — that had built a crust around her that you really couldn’t penetrate," the Warren adviser told Politico. "I don’t feel like Elizabeth has that kind of edge to her.”