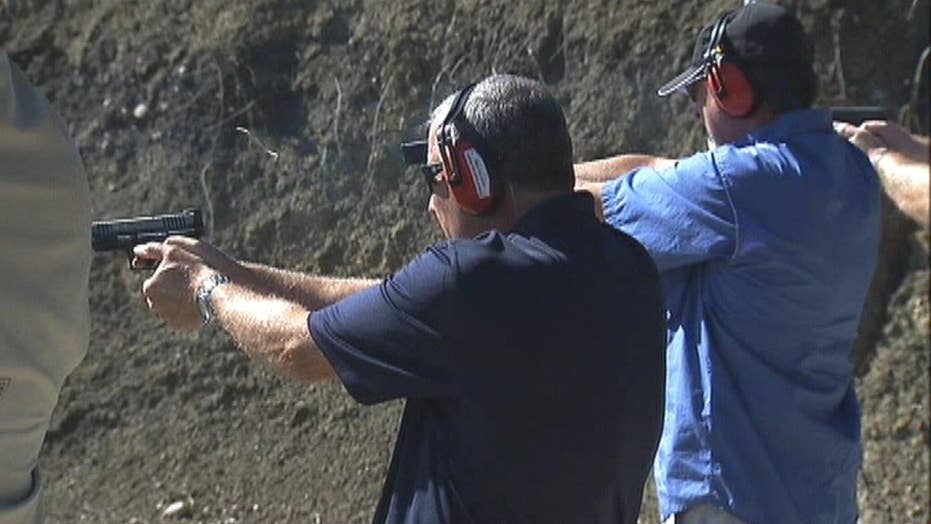 NORTH CHARLESTON, S.C. – The gun-rights debate has returned to the forefront of the Republican presidential battle as the candidates charge into Saturday’s South Carolina primary, going to great lengths to prove their steadfast support of the Second Amendment.

Donald Trump and Ted Cruz are locked in a nasty fight over the issue, as Cruz effectively argues the billionaire businessman would, if elected, abolish gun rights.

“If Donald Trump becomes president, the Second Amendment will be written out of the Constitution, because it is abundantly clear that Donald Trump is not a conservative,” Cruz told ABC News on Sunday, the morning after a GOP debate in Greenville.

Trump claims Cruz is blatantly misrepresenting his positions and has demanded Cruz retract his statements.

“Cruz does lie,” Trump said Wednesday at a South Carolina rally, after earlier declaring, “I’m the strongest person on the stage for the Second Amendment.” He also said Wednesday that he and his sons are “proud” National Rifle Association members.

Jeb Bush, meanwhile, drew considerable attention this week for tweeting a picture of a personalized gun with his name etched into it. Next to the photo was a single word: “America.”

While he faced Twitter ridicule for it, Bush defended the tweet on Fox News’ “America’s Newsroom,” explaining that the gun was given to him by a manufacturer during a visit.

“It was to say that I’m for the Second Amendment,” Bush said, touting his NRA rating. “It meant nothing more than that. It was an appreciation for receiving a gun at a manufacturer that makes the gun, and a lot of jobs are created because of that.”

It’s no accident that gun rights are surging back as a debate topic in the GOP race.

Roughly 44 percent of South Carolina residents own guns, according to a study published in June 2015 in the journal Injury Prevention. The state allows residents and non-residents to carry a concealed firearm, with some exceptions.

The state’s eastern seaboard is populated largely by military and retired military, while gun rights are also a big part of the culture in the state’s rural communities – and beyond. Even in the tourist hub of Charleston, the indoor shooting range Quickshot is a popular entertainment spot where customers can select a gun and shoot at paper targets, like renting a ball and shoes at a bowling alley. The range offers specials for couples on a date and attracted a steady crowd this past Valentine’s Day weekend.

While the GOP 2016 candidates are sparring over gun rights, the debate is likely to heat up more when the eventual Republican nominee engages with either Democratic candidate Hillary Clinton or Bernie Sanders in the general election.

Those in the GOP field who have served in public office -- Cruz, Florida Sen. Marco Rubio, Ohio Gov. John Kasich and former Florida Gov. Jeb Bush -- all have a high rating from the NRA. Trump and retired neurosurgeon Ben Carson are first-time candidates, and have no NRA rating.

Cruz’s campaign, in challenging Trump’s record, has tried to tie Trump to former New York Mayor Michael Bloomberg, one of the most vocal gun control advocates in the country.

But the Trump campaign has pushed back.

Still, the GOP candidates are mindful of striking the right tone on guns, at least in South Carolina.

They must stay in good standing with the powerful gun lobby while being sensitive to the fact that, last year, a white police officer fatally shot an unarmed black man in North Charleston and a gunman killed nine black parishioners inside a downtown Charleston church.

South Carolina residents and political leaders from across the political spectrum appear to have found some common ground on the related issues of police body cameras, better mental-health care and improving FBI background checks. The alleged shooter in the church massacre, Dylann Roof, was allowed to purchase the handgun despite having previously admitted to a felony drug-possession charge.

Joe Desilet, a partner at the D.C.-based political consulting firm 21st & Main, doesn’t see the GOP candidates easing on their defense of the Second Amendment as a result of the Charleston shootings.

“However, as Sen. Marco Rubio and others have already done, you may see the candidates advocate for mental-health reform and other common-sense reforms alongside their defense of the amendment,” he said.

James Overby, a district director with NRA-affiliate Gun Owners of South Carolina, downplayed the notion that Trump would, if elected, try to weaken Second Amendment rights, despite him giving money to the political campaigns of gun-control advocates and Democrats Clinton and New York Gov. Andrew Cuomo.

“I don’t believe it,” said Overby, adding the NRA would have already alerted members in South Carolina and elsewhere if that were the case.

State Democratic Sen. Marlon Kimpson, who backs Clinton, said Clinton’s “immediate” call for tougher gun laws in the aftermath of both killings was a deciding factor in him choosing Clinton over Sanders.