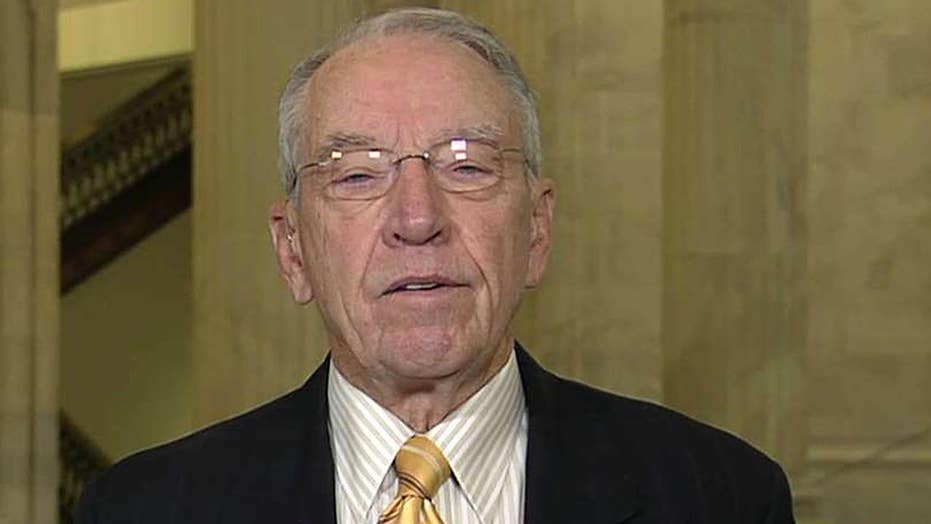 On 'Fox & Friends,' the Republican says it's the Senate Judiciary Committee's job to get answers on the Clinton email investigation.

Senate Judiciary Committee Chairman Chuck Grassley on Wednesday accused the FBI and the Justice Department of hiding information from the public about the Russia investigation and dossier author Christopher Steele, signaling a further deterioration of the relationship between the GOP and the DOJ.

“It sure looks like a bureaucratic game of hide the ball, rather than a genuine concern about national security,” Grassley said in a speech on the Senate floor.

The Iowa Republican said the department was using false classification labels to stop the release of information related to his criminal referral to the Justice Department of Steele, the former British spy who authored the infamous dossier of unverified claims about then-presidential candidate Donald Trump’s ties to Russia.

They have not disclosed in detail what they learned.

Grassley said Wednesday that he wants to release the “unclassified portions” of his referral, but the DOJ and the FBI are preventing him from doing so, because the “FBI is falsely claiming that three of our unclassified paragraphs each contain the same, single classified fact.”

“If FBI really believed this fact was classified, then the FBI and the department should take better care to act consistent with that belief,” Grassley said. “Unfortunately, I suspect something else is really going on here.”

Grassley said he doesn’t believe the fact at issue is classified for several reasons, including how Rosenstein discussed it "with me more than once in unsecure space and on an unsecure phone line.”

He also said that the FBI is not acting as if this information would harm national security if released, and that other entities who received the memo were never contacted by the FBI to tell them it was classified.

“Those particular paragraphs are based on nongovernment sources and do not claim to repeat or confirm any information from any government document. Even if those portions of our referral did reference the allegedly classified fact at issue, it is hard to understand why that fact should be classified."

Grassley said he is “pressing this issue” with Wray and hopes to be able to release the information “as soon as possible.”

“Hiding from tough questions about these controversial cases is no way to reassure the public,” he said. “If the department is afraid of independent oversight, that just reinforces people’s suspicions and skepticism. The only real way to reassure people is to let the sun shine in and let the chips fall where they may.”

The Steele dossier was first published by BuzzFeed News in January 2017.

Republicans have been investigating whether the unverified dossier fueled the original Russia inquiry and helped justify surveillance on Trump associates. They were emboldened after the revelation that the project got funding from the Clinton campaign and Democratic National Committee.