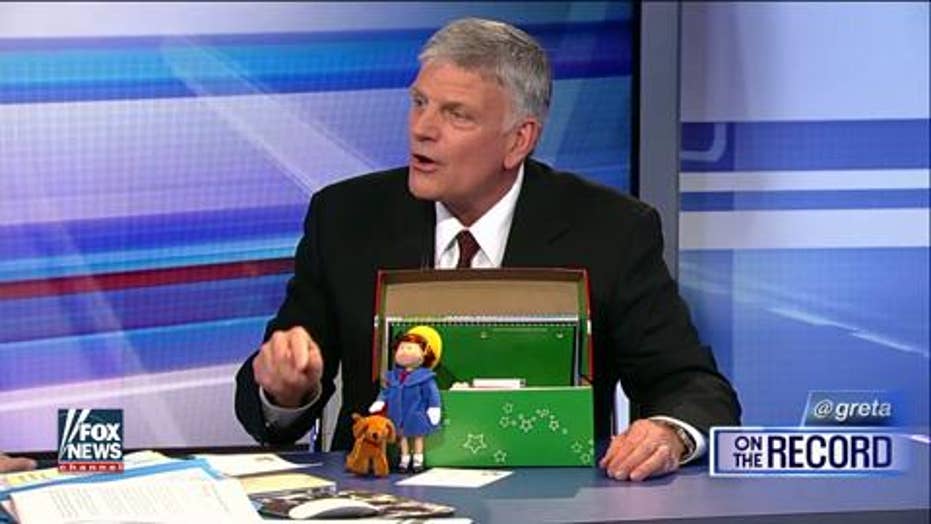 The Rev. Franklin Graham goes 'On the Record' on why he has left the Republican Party and declared himself an Independent. Plus, his Samaritan's Purse's Operation Christmas Child is underway.

The Rev. Franklin Graham quitting the Republican Party poses a significant blow to the GOP’s 2016 White House aspirations, especially if other evangelical pastors follow suit and their millions-plus congregations stay away from the polls.

Graham suggested earlier this week that the last straw was congressional Republicans funding Planned Parenthood in the recently passed, $1.8 trillion tax-and-spending package, despite revelations about the group harvesting fetal tissue.

However, he made clear Wednesday night that the funding was only part of the reason he left the GOP to become an independent.

"It's not just that,” Graham said on Fox News’ “On the Record with Greta Van Susteren.” “It's the way the bill was passed. It came down so quickly. And it didn't seem like anybody tried to fight it. It was just, 'Let's get home for Christmas.' "

Graham, the son of evangelical leader Billy Graham, also expressed disappointment with GOP and Democratic leaders but insisted he’s not trying to lead a GOP exodus.

“I'm not here to hurt the Republican Party,” he said, adding that the GOP appears to have “some good candidates” in the 2016 White House race.

“People already know how evangelicals feel about the sanctity of life,” he told FoxNews.com. “That’s a continual fight. But the government spending also speaks to us. That was the disappointment and frustration you heard in brother Graham’s tone.”

De Jesus, popularly known as Pastor Choco, said only time will tell whether other evangelical leaders will follow Graham and potentially take voters with them.

“Many evangelicals are still vetting,” he said. “It’s too early. … But hope is in the kingdom of God, not in the political system.”

While evangelical Christians have long been a key part of the Republican base, their support in the 2016 presidential election cycle appears even more critical as black voters remain overwhelming loyal to Democratic presidential nominees and Hispanics now go to the polls in record numbers for Democrats.

Hispanics, in fact, voted for President Obama over 2012 GOP presidential nominee Mitt Romney 71 percent to 27 percent, according to an analysis of exit polls by the Pew Research Center.

“We cannot afford to stand on the sidelines as our Christian values are continually trampled,” Jack Graham, pastor of the Prestonwood Baptist Church in Texas, said in October, before a forum with the Faith & Freedom Coalition for 2016 White House candidates.

Graham did not return a request for comment for this story.

White evangelical support for Republican presidential nominees has been largely consistent for at least the past three election cycles, amid assertions that Romney, a Mormon and a moderate, lost in part because millions of evangelical voters stayed on the sidelines.

Some political observers argue at least 3 million Republican voters stayed home, which could have given Romney wins in swing states Florida or Ohio.

The analysis also shows that voting bloc was in 2012 about the same size that it was in the previous two cycles, amid speculation the number was declining.

Texas GOP Sen. Ted Cruz -- a top-tier GOP presidential candidate courting the evangelical vote -- said in March that roughly half of born-again Christians aren’t voting, which resulted in questions about his methodology.

“They’re staying home,” he said at Liberty University, in Virginia. “Imagine instead millions of people of faith all across America coming out to the polls and voting our values."

Cruz’s campaign did not respond Wednesday for a request for comment. Fellow GOP candidates Carly Fiorina and Kentucky Sen. Rand Paul declined though spokespeople who said their respective candidate was spending time with family over the Christmas holidays.

House Speaker Paul Ryan, elected relatively late in this year’s budget process, has vowed to revisit the issue of Planned Parenthood funding when Congress returns next month. But that might be too late for Graham and other evangelicals.

“Republicans always have a reason for not doing something that they say they would,” Bret Bozell, founder of the conservative-leaning Media Research Center, said Wednesday.

He suggested that evangelicals will likely support Cruz and Donald Trump in the primaries but expressed less certainty about the general election.