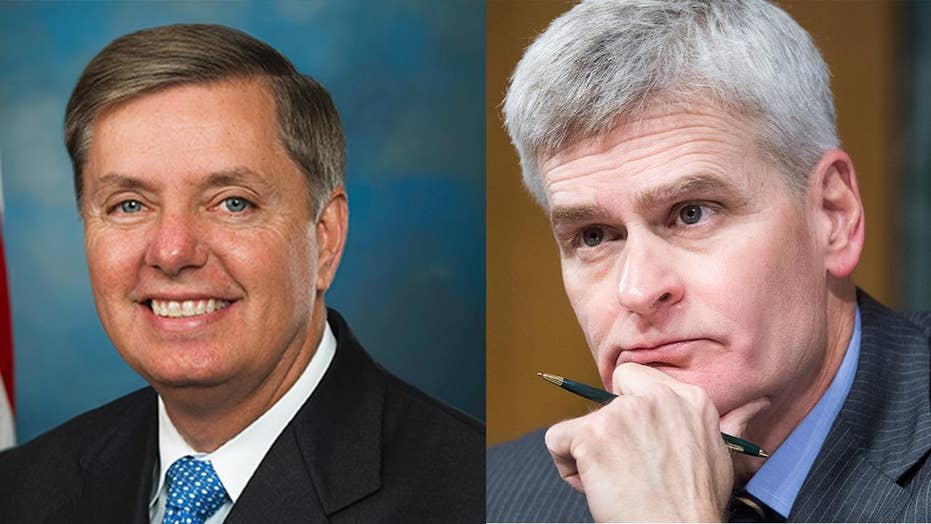 What’s in the Graham-Cassidy healthcare bill?

What are the sticking points in the GOP’s latest effort to overturn Obamacare, the Graham-Cassidy healthcare bill? Watch the video to find out

Sen. Susan Collins of Maine was the fourth GOP senator to announce she will not vote for Republicans’ last-ditch plan to finally repeal ObamaCare – signaling an end to the bill.

Collins said Monday that the Graham-Cassidy bill, chiefly written by Sens. Lindsey Graham of South Carolina and Bill Cassidy of Louisiana, was “deeply flawed.” She joins Sens. Rand Paul, John McCain and Ted Cruz in opposition of the legislation – although Cruz reportedly could change his vote if certain adjustments are made to the plan.

The Graham-Cassidy bill got some last-minute revisions over the weekend in an effort to garner more support, specifically from Sen. Lisa Murkowski, R-Alaska, who has not announced her decision.

The legislation, largely seen as a Hail Mary pass by Republicans to make good on their years-long promise to eradicate ObamaCare, can only afford to have two Republicans vote against the bill without any support from Democrats before it's doomed.

President Donald Trump has strongly peddled the Graham-Cassidy legislation, specifically on Twitter, and urged senators to vote for it.

Senate Republicans scrambled ahead with the new plan since they have until September 30 to push through health care reform using a special procedure to avoid a filibuster. However, Republicans are reportedly hesitant to bring this latest effort to a vote.

Read on for a look at what the Graham-Cassidy bill does.

What does the legislation do?

The Graham-Cassidy legislation would implement a block grant program that gives funding to states, which would then have a wide leeway on how that money is spent.

“We’ll allow [the] states to come up with solutions to help sick people, not just some bureaucrat in Washington,” Graham told Fox News.

“We’ll eliminate the individual mandate, the heart and soul of ObamaCare, that is gone at the federal level. We take the money and send it back to the states in a block grant formula where they can administer health care,” Graham added.

New provisions were added over the weekend that would allocate additional money to Alaska and Wisconsin. Among others, one provision allowed for an increase in Medicaid funding to states with a high population of Native Americans, including Alaska.

Avalere also said states with a higher number of individuals in insurance affordability programs and Medicaid would face a greater impact. California would suffer the greatest loss, it said.

Where do GOP lawmakers stand?

Sen. John McCain, R-Ariz., previously said that he would “reluctantly” vote for the measure if Gov. Doug Ducey supported it – which he does.

But McCain said Friday that he would have considered the bill from his "friends" if "it were the product of extensive hearings, debate and amendment."

"We should not be content to pass health care legislation on a party-line basis, as Democrats did when they rammed ObamaCare through Congress in 2009," McCain said.

Sen. Lisa Murkowski, R-Alaska, who also voted against the previous “skinny repeal” in July which failed 51 to 49, has not signaled what her decision will be.

Sen. Rand Paul, R-Ky., was the first Republican who said he would vote against the bill.

The bill needs 50 votes to pass, with Vice President Pence potentially casting a tie-breaking vote. Pence said he’s “all in” for the plan.

What does the Congressional Budget Office say?

The Congressional Budget Office released a preliminary assessment of the bill Monday that does not provide “point estimates that are typical” in analyses because of time constraints.

Along with the Joint Committee on Taxation, the analysis estimated that the proposal would reduce the on-budget deficit by at least $133 billion. It would also lower the number of people with comprehensive health insurance by “millions.”

“That number could vary widely depending on how states implemented the legislation, although the direction of the effect is clear,” the analysis said.