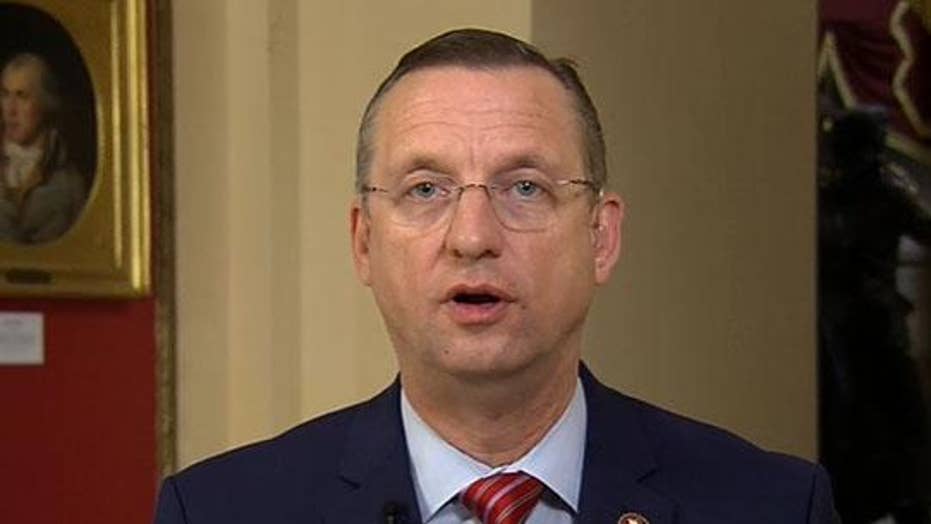 Doug Collins, House Judiciary Committee, forecasts when Nancy Pelosi may send articles of impeachment to the Senate and when a trial could begin

Republican Rep. Doug Collins apologized for claiming that Democrats were “in love with terrorists” amid heightened tensions with Iran, saying Friday he does not actually believe that.

“Let me be clear: I do not believe Democrats are in love with terrorists, and I apologize for what I said earlier this week,” Collins, the ranking member of the House Judiciary Committee, tweeted Friday.

“They are in love with terrorists,” Collins said Wednesday on Fox Business Network’s “Lou Dobbs Tonight.” “We see that they mourn [Gen. Qassem] Soleimani more than they mourn our Gold Star families who are the ones who suffered under Soleimani. That’s a problem.”

But after harsh criticism, Collins sent a series of tweets walking back his remark.

“The comment I made on Wednesday evening was in response to a question about the War Powers Resolution being introduced in the House and House Democrats’ attempt to limit the president’s authority,” he explained.

“As someone who served in Iraq in 2008, I witnessed firsthand the brutal death of countless soldiers who were torn to shreds by this vicious terrorist,” he continued. “Soleimani was nothing less than an evil mastermind who viciously killed and wounded thousands of Americans.”

“These images will live with me for the rest of my life, but that does not excuse my response on Wednesday evening,” he said. “I remain committed to working with my colleagues in Congress and with my fellow citizens to keep all Americans safe.”

The House voted this week to approve a War Powers Resolution, mostly along party lines, to limit Trump's military action amid heightened tensions between the U.S. and Iran.

The resolution is non-binding but is meant to reassert congressional authority and rebuke Trump’s decision to take out Soleimani in a drone strike last Friday while he traveled to an airport in Baghdad, Iraq. Trump did not consult with congressional leaders ahead of the attack that killed the Iranian military leader and afterward sent Congress a notification explaining the rationale but kept it classified.