A Democratic congressional intern was arrested Wednesday and accused of posting the personal information of at least one Republican senator during last week's hearing about sexual assault claims against Supreme Court nominee Brett Kavanaugh, authorities said.

Senior congressional sources tell Fox News that Cosko most recently worked as an unpaid intern for Rep. Sheila Jackson Lee, D-Texas. He previously worked with Sen. Maggie Hassan, D-N.H., and former Democratic Sen. Barbara Boxer of California. He also worked or interned with the office of Sen. Dianne Feinstein, D-Calif., the ranking member of the Senate Judiciary Committee, as well as with at least one other unnamed lawmaker. A LinkedIn page with Cosko's name on it describes him as a "Democratic Political Professional & Cybersecurity Graduate Student."

Jackson Lee's office told Fox News that Cosko had only worked there for a couple of months, but has now been terminated. 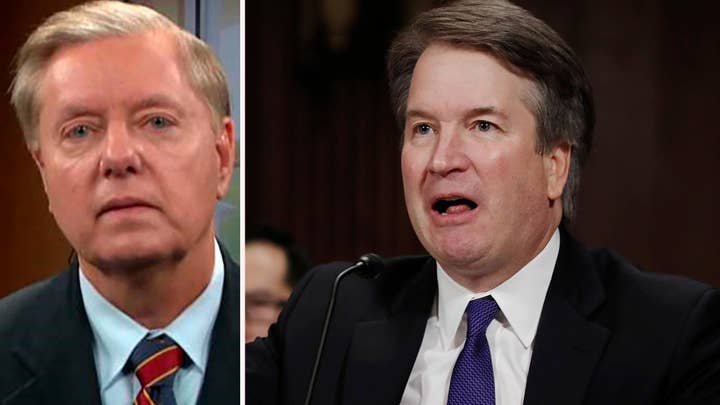 Hassan’s office has had two substantial personnel issues in recent months. Earlier this year, an intern for the senator shouted "Mr. President, f--- you!" across the Capitol Rotunda at President Trump as he was being escorted into the office of House Speaker Paul Ryan, R-Wis. Hassan's office declined to comment on Cosko's arrest.

Personal information of Sens. Lindsey Graham, Mike Lee and Orrin Hatch was posted on their respective Wikipedia pages Thursday as the Senate Judiciary Committee questioned Kavanaugh over allegations that he assaulted Christine Blasey Ford at a high school party in the early 1980s. All three have professed their belief that Kavanaugh is innocent of the claims brought against him by Ford, with Graham telling the federal judge "you've got nothing to apologize for" amid a fiery rant denouncing Democrats' handling of the allegations.

The intentional publication of the information was first caught by a Twitter bot that automatically tracks any changes made to Wikipedia entries from anyone located in the U.S. Congress and publicizes them on the social media site. The bot account later deleted the tweets because the edits contained personal information. According to the bot, whoever posted the information did so from a computer in the House of Representatives.

The home addresses of the senators appeared to be correct, though the phone numbers didn't appear to be entirely accurate. A "home" phone number listed for Graham appeared to direct callers to the Sexual Minority Youth Assistance League (SMYAL), a Washington D.C.-based advocacy group.

Sources tell Fox News that authorities are looking into the possibility that at least two other senators were doxxed.

Fox News has also learned that Cosko was discovered by aides Tuesday night working on a computer in a Capitol Hill office that did not belong to Jackson Lee. He was arrested at his Washington home the following day. Capitol Hill security officials plan to scrub the computers in question.