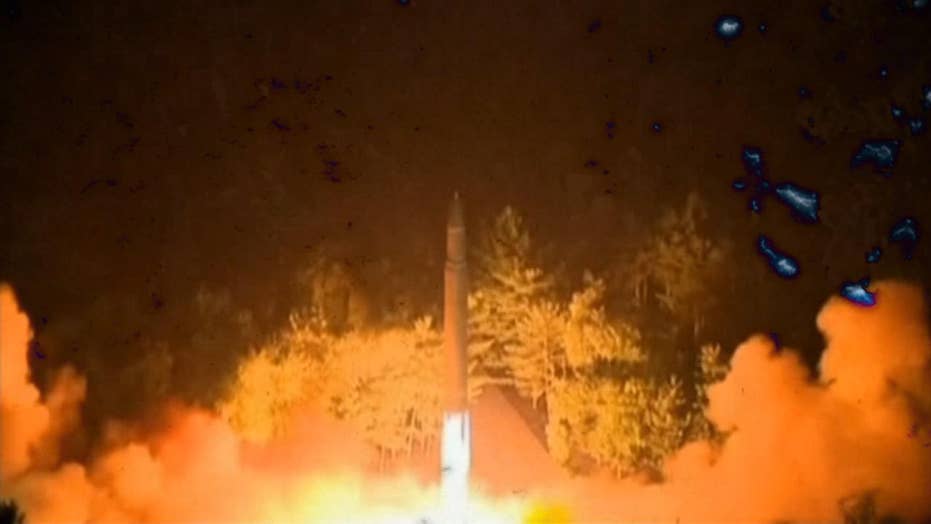 North Korea’s threats: How past presidents have handled Pyongyang’s rhetoric

Is President Trump's talk on North Korea too tough? Here’s how past presidents handled Pyongyang’s rhetoric

President Trump has agreed to a meeting with North Korean leader Kim Jong Un, the White House has confirmed.

Kim reportedly extended the invitation for the meeting, which is expected to take place by May. U.S. Secretary of State Rex Tillerson said Trump “himself” made the decision to accept the offer.

From promising to unleash “fire [and] fury” on Pyongyang to dubbing North Korean leader Kim Jong Un “Rocket Man,” Trump’s rhetoric when it comes to the Pacific Asian nation has been anything but soft during his first year in the White House. Here’s a look at how Trump and his predecessors have handled North Korea and its nuclear arsenal.

Trump redesignated North Korea a state sponsor of terrorism in November 2017 and promised a slew of new sanctions as part of the United States’ “maximum pressure campaign.”

“In addition to threatening the world by nuclear devastation, North Korea has repeatedly supported acts of international terrorism, including assassinations on foreign soil,” Trump said from a Cabinet meeting.

And during a speech to the United Nations, Trump said the dictator was on a “suicide mission for himself and for his regime.”

"If [the U.S. is] forced to defend itself or its allies, we will have no choice but to totally destroy North Korea."

“The United States has great strength and patience,” the president said. “But if it’s forced to defend itself or its allies, we will have no choice but to totally destroy North Korea.”

But, in a dramatic turn of events, Trump has agreed to meet with Kim by May.

“Kim Jong Un talked about denuclearization with the South Korean Representatives, not just a freeze,” Trump said on social media after the White House confirmed the upcoming visit. “Also, no missile testing by North Korea during this period of time. Great progress being made but sanctions will remain until an agreement is reached. Meeting being planned!”

Former President Barack Obama asked the military in 2010 to prepare with South Korea in order to be “ready” to deter any aggressions from North Korea – after North Korea sank its southern neighbor’s naval ship.

Throughout his presidency, Obama warned and criticized North Korea for testing nuclear bombs and implored the Chinese government to help alleviate the aggression.

In one warning to North Korea against launching a long-range missile, Obama said that if it should “decide to take this action, we will work with all interested partners in the international community to take appropriate steps to let North Korea know that they cannot threaten the safety and stability of other countries with impunity.”

North Korea is "a pariah state that would rather starve its people than feed their hopes and dreams."

During a press conference with then-French President Nicolas Sarkozy in 2009, Obama said North Korea’s actions had “been extraordinarily provocative.”

“My preference is always to use a diplomatic approach. But diplomacy has to involve the other side engaging in a serious way in trying to solve problems,” Obama said. “And we have not seen that kind of reaction from North Korea.”

And in a 2014 visit to South Korea, Obama said the U.S. would “not hesitate to use our military might” to defend allies, especially against “a pariah state that would rather starve its people than feed their hopes and dreams.”

“North Korea’s continued pursuit of nuclear weapons is a path that leads only to more isolation,” Obama said.

George W. Bush infamously dubbed North Korea, along with Iran and Iraq, an “axis of evil” during his presidency.

In his 2002 State of the Union address, Bush slammed the countries as “regimes that sponsor terror.”

“North Korea is a regime arming with missiles and weapons of mass destruction, while starving its citizens,” Bush said.

"States like these, and their terrorist allies, constitute an axis of evil, arming to threaten the peace of the world."

During Bush’s presidency, North Korea admitted that it had developed a nuclear weapons program, the New York Times reported in 2002.

Bush wasn’t ready to give up that “axis of evil” label for North Korea when asked years later in 2008.

“That has yet to be determined. The human rights abuses inside the country still exist and persist,” Bush said.

But the Bush administration also removed North Korea from the State Department’s list of state sponsors of terror in 2008 in a bid to salvage international talks aimed at halting its nuclear efforts.

Following his presidency, Bush said “we must do more to improve the human condition in North Korea.”

During his presidency, Bill Clinton approved a plan which would provide more than $4 billion in energy aid to North Korea over 10 years. In return, North Korea was expected to disband and dismantle its nuclear weapons program.

At the time, Clinton heralded the program as a “good deal.”

“The United States and international inspectors will carefully monitor North Korea to make sure it keeps its commitments,” Clinton said. “Only as it does so, will North Korea fully join the community of nations.”

"[North Korea] would pay a price so great that the nation would probably not survive as it is known today."

The agreement ultimately broke down in the early 2000s.

In a press conference in November 1993, Clinton warned Pyongyang against waging war.

“I know of no one who seriously believes that the United States and [South Korea] would be defeated in a war of aggression by North Korea if they were to attack,” Clinton said. “And I made it as clear as I could that if they were to do that, they would pay a price so great that the nation would probably not survive as it is known today.”

After his presidency Clinton traveled to Pyongyang in 2009 and successfully negotiated for the release of two U.S. reporters who were jailed when they were caught filming a documentary about the trafficking of North Korean women.