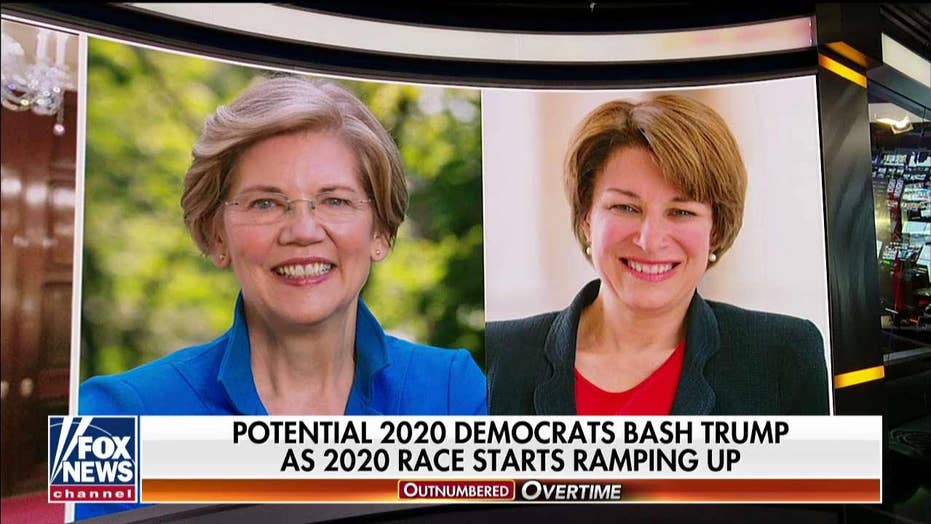 McEnany: 2020 Dems Attacking Trump Because They 'Don't Have the Facts on Their Side'

After President Donald Trump took office, many voters doubted he would finish his term, much less stand for re-election. But, as the 2020 race heats up, voters are increasingly confident the eventual Democratic nominee will indeed face off against the current occupant of the White House.

In August 2017, 58 percent thought Trump would finish his term. Now 70 percent do, according to the latest Fox News Poll released Thursday.

The poll also found, paradoxically, an even higher number -- 80 percent -- think Trump will run for re-election. Fourteen percent do not.

Still, a sizable minority -- 23 percent of all voters -- thinks the president will not stay all four years. Democrats lead that charge with 40 percent saying so.

“That may just be wishful thinking,” says Republican pollster Daron Shaw, who runs the Fox News Poll along with Democrat Chris Anderson. “The party distribution among those doubting Trump is heavily skewed towards the Democrats, most of whom concluded long ago that the president is guilty of a range of sins and transgressions.”

While most think Trump will run again, 17 percent of Republicans and even 15 percent of Trump voters prefer the GOP nominate someone else.

Not surprisingly, 84 percent of Democrats would also like Trump dumped, as do 65 percent of independents, 70 percent of nonwhites and 62 percent of women.

Overall, 53 percent would rather someone other than the president as the Republican nominee. Slightly more than a third (36 percent) say keep him.

So what are the odds the Democrats defeat Trump? A 55-percent majority say either excellent (19 percent) or good (36 percent) while 39 percent think they have either no chance (13 percent) or not much of one (26 percent).

Most Democrats (84 percent) and a plurality of independents (48 percent) think the Democratic Party’s chances are excellent or good – as do nearly 3 in 10 Republicans (28 percent).

“As with most issues these days, expectations about the 2020 presidential election are largely processed through a partisan lens. Democrats are slightly more bullish about Trump being defeated than Republicans are about his re-election chances,” says Anderson. “But, big picture, Democrats and Republicans both feel pretty optimistic about their candidate winning in 2020.”

On January 27, former Starbucks CEO Howard Schultz announced on CBS News' “60 Minutes” that he was looking into an independent run for president.

If he runs, it will be an uphill climb. Two-thirds of voters can’t rate him (27 percent have no opinion and 36 percent have never heard of him), yet his unfavorable rating (25 percent) is double his favorable number (12 percent).

Compare that to freshman Rep. Alexandria Ocasio-Cortez, D-N.Y. Her favorable rating is also underwater, but she is considerably better-liked (26 percent favorable) and just 19 percent haven’t heard of her. Thirty-nine percent view her unfavorably and 15 percent have no opinion.

The Fox News poll is based on landline and cellphone interviews with 1,004 randomly chosen registered voters nationwide and was conducted under the joint direction of Beacon Research (D) (formerly named Anderson Robbins Research) and Shaw & Company Research (R) from February 10-12, 2019. The poll has a margin of sampling error of plus or minus three percentage points for all registered voters.