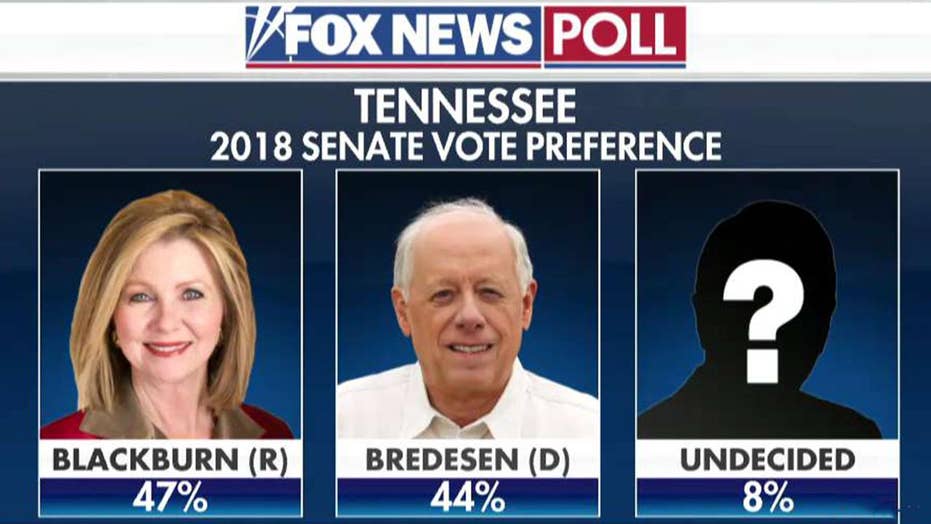 President Trump won Tennessee by 26 percentage points, and he remains popular in the Volunteer State.

By a 20-point margin, Tennessee voters approve of the job he’s doing (58-38 percent), and by an 8-point margin, more say their vote in the Senate race will be to express support for the president (35 percent) rather than opposition to him (27 percent).

That helps Republican Marsha Blackburn top Democrat Phil Bredesen, yet it’s surprisingly close given Trump’s wide win two years ago.  Blackburn gets 47 percent to Bredesen’s 44 percent in the race to fill the state’s open Senate seat, according to a Fox News poll of Tennessee likely voters.  Her three-point advantage is within the poll’s margin of sampling error.

The candidates are vying to fill the seat of retiring Republican Sen. Bob Corker.

Eighty-one percent of Bredesen’s backers feel certain they will vote for him compared to 74 percent for Blackburn.  Overall, one in five say they could switch their pick before November.  With another eight percent undecided in their vote choice, there’s room for the race to change.

Not everyone who approves of Trump is backing Blackburn, and that makes for a close race. Among Trump approvers, 76 percent go for Blackburn and 16 percent for Bredesen, who served as governor of Tennessee from 2003 to 2011.

The economy is the top concern for Tennessee likely voters.  Twenty-nine percent say that will be most important to their vote for Senate, followed closely by 27 percent who say health care.

The candidates are about equally popular, as just over half have a favorable opinion of Bredesen (54 favorable vs. 36 unfavorable) and Blackburn (51-39 percent).

“Bredesen is within striking distance of Blackburn, which is unusual for a Democrat in Tennessee” says Republican pollster Daron Shaw, who conducts the Fox News poll with Democrat Chris Anderson.

“But Bredesen is personally popular, with a net favorable rating of +18, and he’s up 13 points among those who are ‘extremely interested’ in the race.  That’s got to cause some anxiety in Blackburn’s camp.”

When voters are asked to compare their family’s financial situation to two years ago, more than twice as many say things are better (34 percent) rather than worse (15 percent).  For half, 50 percent, it’s the same.

In the race for governor, Tennessee likely voters back Republican Bill Lee (55 percent) over Democrat Karl Dean (35 percent) by 20 points.  Sixteen percent of those backing Bredesen in the Senate race cross party lines to support Lee.

The Fox News Poll is conducted under the joint direction of Anderson Robbins Research (D) and Shaw & Company Research (R).  The poll was conducted September 8-11, 2018 by telephone (landline and cellphone) with live interviewers among 686 Tennessee likely voters and has a margin of sampling error of plus or minus 3.5 percentage points.  Registered voters were randomly selected from a statewide voter file, and respondents answered screening questions about their likelihood to vote in the November elections.