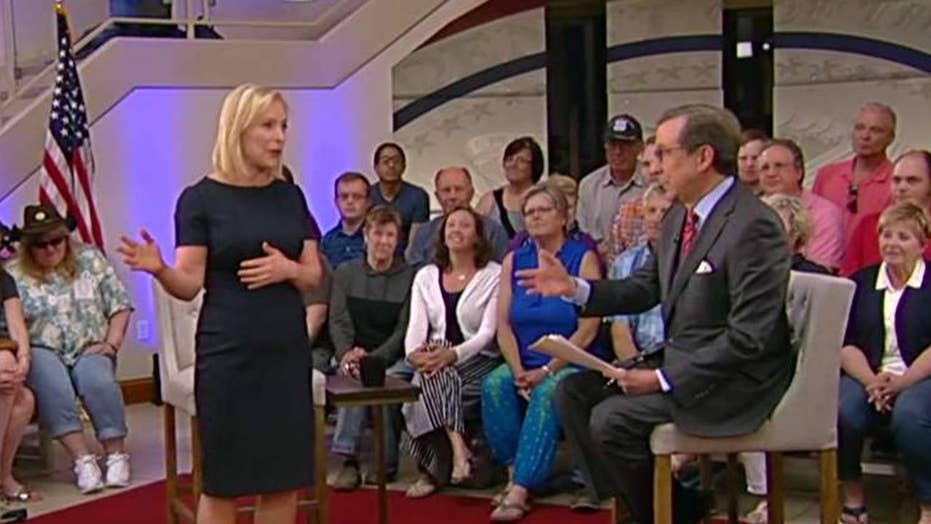 Democratic presidential candidate Sen. Gillibrand claims a 'false narrative' has been created in the abortion debate.

Things got heated at a Fox News town hall in Iowa Sunday when Sen. Kirsten Gillibrand, D-N.Y. used the platform to blame the network for allowing discussions of infanticide in debates about abortion and women's reproductive rights.

When asked by a retired pediatric nurse named Susan about her stance on late-term abortions, Gillibrand pivoted to an attack on Fox News.

Gillibrand accused Fox of fueling what she called the infanticide "red herring" by devoting 6.5 hours of coverage to the debate, including comments from guests on the network.

"What we have created, unfortunately, is a false choice and a false narrative," Gillibrand said of the climate surrounding the issue. "And Chris, I want to talk about the role that Fox News plays in this because it's a problem. I can tell you before President Trump gave his State of the Union, Fox News talked about infanticide."

"Senator, I just want to say, we've brought you here for an hour," Wallace said. "We've treated you very fairly. I understand that maybe to make your credentials with the Democrats who are not appearing on Fox News you want to attack us. I'm not sure it's frankly very polite when we've invited you to be here."

Gillibrand, who is polling at around one percent according to most national and early voting state polls, has yet to secure the 65,000 individual donor campaign contributions necessary to qualify her for the late June and July primary debates and hoped to use her platform on Fox to bolster support.

"I'll do it in a polite way," Gillibrand countered.

“Instead of talking about Fox News why don’t you answer Susan’s question,” Wallace said redirecting the senator to her stance on late-term abortions.

Gillibrand, a fervent supporter of abortion rights, has previously vowed to only nominate federal court judges who support Roe v. Wade, the 1973 Supreme Court decision that legalized abortion across the nation. She repeated that position during Sunday night's event at the University of Dubuque.

"Does that mean that you're okay with other presidents having their own litmus tests?" Wallace asked her. "Maybe a pro-life president might say 'I'll only appoint people who will overturn Roe v Wade.' Because the tradition in this country has been [the] independence of the judiciary and the idea that a judge, once appointed, will judge each case on its merits and not on the basis of a promise made, a political promise to get that position."

"I think it's changed. That's the way it used to be before President Trump," Gillibrand responded. "President Trump said he would only appoint judges that would overturn Roe v. Wade."

"He already did and he's doing it," she said. "The rules have changed."

Gillibrand also accused Republicans of creating a "false narrative" that doctors allow healthy babies to die after they are born in order to ease the passage of the “Born-Alive Abortion Survivors” bill, legislation that would make it a felony for a doctor to harm or neglect a baby who survives an attempted abortion.

Gillibrand went on to say that President Trump "emboldened legislatures in over 30 states to begin to criminalize" a woman's decision to have an abortion, state laws that have been challenged in courts across the nation because of their direct conflict with the precedent set by the Constitution.

The senator slammed a member of her own party, Louisiana Gov. John Bel Edwards, for signing a bill on Thursday that would prohibit women from having an abortion once a baby's heartbeat is detected, in almost all cases. Gillibrand accused Edwards of "turning his back on Louisiana women by signing this shameful bill," in a statement on Twitter Thursday.