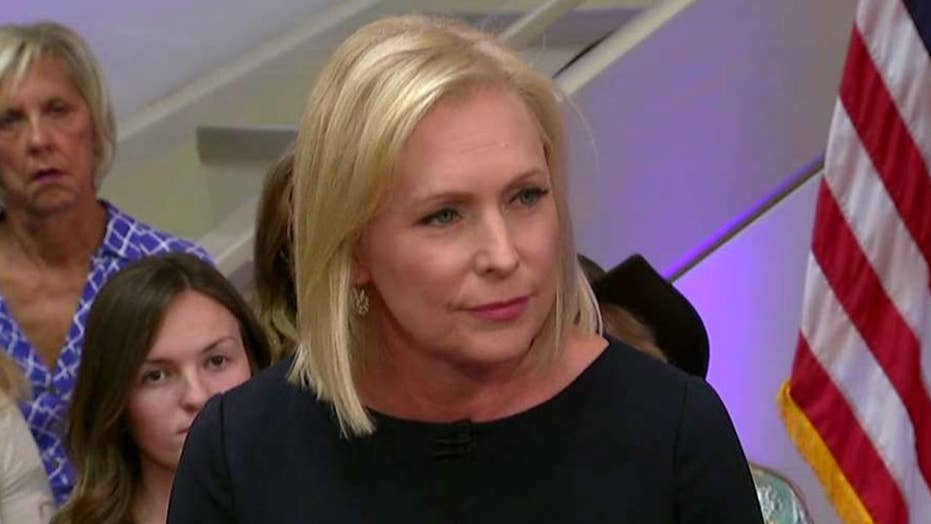 Sen. Kirsten Gillibrand, D-N.Y. sought to revive her struggling presidential candidacy at a fiery Fox News town hall in Dubuque, Iowa Sunday by unapologetically embracing late-term abortion, and lighting into the National Rifle Association (NRA) as "the worst organization in this country."

In one particularly testy moment, moderator Chris Wallace challenged Gillibrand's attack on Fox News' coverage of elected Democrats' comments and legislative action on infanticide: "Instead of talking about Fox News, why don't you answer Susan's question?" Wallace asked, referring to an audience member who had questioned Gillibrand about late-term abortion.

At the outset, the town hall focused on gun violence, in the wake of the massacre of 12 people Friday at a Virginia Beach municipal building.

"Americans are feeling ripped apart by the gun deaths we have seen, year after year, month after month," Gillibrand said. "The most outrageous thing that's happened to our democracy is how much fear, and division, and hate has been spread. I think the NRA is the worst organization in this country for doing exactly that. They care more about their profits than the American people."

Democratic presidential candidate Sen. Gillibrand claims a 'false narrative' has been created in the abortion debate.

Gillibrand went on to call for universal background checks, a bump stock ban, and a federal anti-weapons trafficking law. She also accused the NRA of having a "chokehold" on members of Congress. (The Trump administration has already banned bump stocks, over the objections of some conservatives who raised concerns about the constitutionality of the sweeping executive order.)

Wallace pointed out that Friday's shooting would not have been stopped by any of Gillibrand's proposed initiatives, and inquired whether she could provide more specific ideas that could have prevented the murders.

"Stop being beholden to the NRA like President Trump is," Gillibrand offered. "The NRA is lying to the American people. It is not about the Second Amendment. It is about gun sales. ... It is literally about greed and corruption, and making sure the status quo remains the same."

Wallace then noted that Gillibrand boasted in 2009 about receiving a 100 percent "A" rating from the NRA and said she kept two guns under her bed. She was also a member of the conservative Democratic Blue Dog coalition when she represented New York's rural 20th congressional district in the House.

Gillibrand first began recasting her politics upon her appointment by then-New York Gov. David Paterson to fill the Senate seat vacated by Hillary Clinton in 2009.

This photograph released by the state shows Alabama Gov. Kay Ivey signing a bill that virtually outlaws abortion in the state on Wednesday, May 15, 2019, in Montgomery, Ala. (Hal Yeager/Alabama Governor's Office via AP)

"I came from a district that was really rural -- Second Amendment was important, hunting was important," Gillibrand responded. "I recognize people have different communities."

Pressed on what changed once she arrived in the Senate and quickly received an "F" rating from the NRA, Gillibrand continued: "Just realizing that not every part of this country is like my rural, upstate district."

Gillibrand also issued a full-throated endorsement of abortion rights, and insisted she would "codify Roe v. Wade, so it is forever the law of the land" when asked to clarify whether she supported late-term abortions.

She also suggested "all-male" legislators were behind the passage of a slew of pro-life "heartbeat" laws that have passed recently in southern states. However, Alabama's female governor, Kay Ivey, enacted the state's restrictive anti-abortion law in May, while the Democratic representative behind a similar bill in Louisiana is an African-American woman. Several other women legislators also supported the bills.

At one point, Gillibrand attempted to attack Fox News' coverage of Democrats' efforts to block anti-infanticide legislation, in the wake of Virginia Democrat Gov. Ralph Northam's apparent endorsement of the practice.

But Wallace interjected, saying Gillibrand apparently wanted to enhance her credibility among progressives with impolite and inappropriate jabs at the network hosting her for the event.

Wallace then probed Gillibrand's Dec. 2018 tweet stating that "Our future is: Female, Intersectional, Powered by our belief in one another." The tweet attracted mockery in conservative circles, with Florida Sen. Marco Rubio responding; "Our future is: AMERICAN. An identity based not on gender, race, ethnicity or religion. But on the powerful truth that all people are created equal with a God-given right to life, liberty & the pursuit of happiness."

"Really good questions, Chris," Gillibrand responded when asked what she meant by her remarks. "What I mean by 'our future is female' is that we want more women's voices heard. I was so inspired by the 2018 election. ... Our first two Muslim-American women [elected to Congress]."

"What about men?" Wallace asked.

"They're already there. Do you not know?" Gillibrand replied, to applause. "It's not meant to be exclusionary, it's meant to be inclusive."

At the California Democratic Party convention in San Francisco this weekend, Colorado Gov. John Hickenlooper elicited loud boos from attendees in a viral video moment when he declared "socialism is not the answer" to enacting progressive policies and beating Trump. Hickenlooper quickly highlighted the negative reaction on his Twitter account: "I know this message won't be popular with everyone in our party. But the stakes are too high. We cannot hand this election to Donald Trump."

Asked where she stood on the issue, Gillibrand refused to wholeheartedly endorse either capitalism or socialism.

"There's a lot of confusion," Gillibrand said. "There's a big difference between capitalism and greed. We know what healthy capitalism looks like. ... Over the last few decades, we've seen income inequality grow because we care more today about shareholders than we do about workers."

Since jumping into the race in January, Gillibrand has been hovering right around one percent – or less – in most national and early voting state polls. She’s watched one-time extreme long-shots like Buttigieg and entrepreneur Andrew Yang move ahead of her in the polls.

Asked how she could compete with frontrunner Joe Biden, Gillibrand responded, "This is a marathon, not a sprint ... It's still early, I'm still introducing myself to the voters."

In a personal moment, Gillibrand defended her decision to call for former Minnesota Democrat Sen. Al Franken's ouster, amid allegations he behaved inappropriately and made improper physical contact with women. She described a conversation she had with her son at the time.

Key Democrat donors reportedly swore off Gillibrand after the episode, saying she was trying to advance her own career at the expense of the party. Billionaire left-wing megadonor George Soros, in an interview with The Washington Post, said Gillibrand was the only Democrat he hoped would not win the presidency.

"I was not going to remain silent," Gillibrand told Wallace. "If a few Democratic donors are angry because I stood by eight women ... that's on them."

Wallace countered that Gillibrand could be seen as an opportunist, especially because she only said Bill Clinton should have resigned during the Monica Lewinsky scandal in 2017 -- long after Clinton campaigned and fundraised for Gillibrand in 2006 and 2009, and after Hillary Clinton lost her 2016 presidential bid.

"Do we value women?" Gillibrand asked, pivoting to discuss her general work on women's issues. "What the #MeToo movement has been about, has been creating space for men and women to come forward and tell their truth."