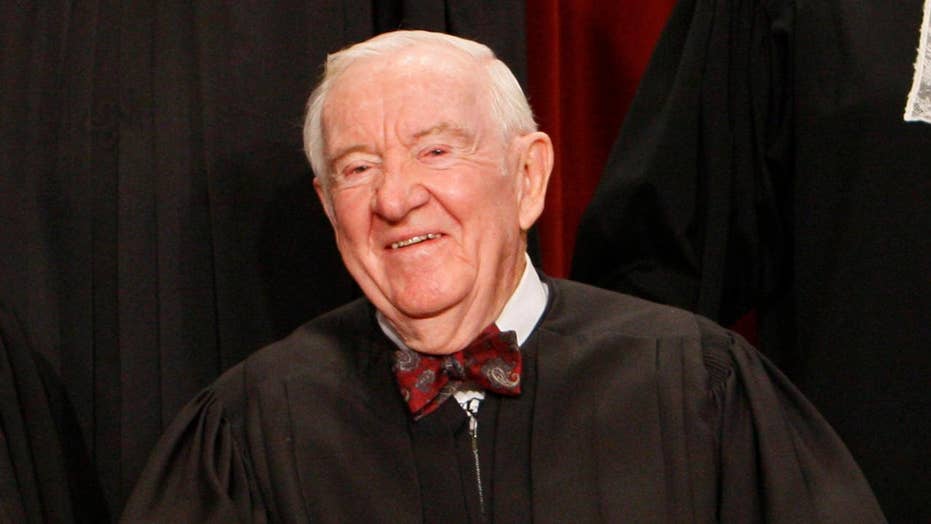 Former Supreme Court Associate Justice John Paul Stevens, one of the longest-serving justices on the bench, died Tuesday evening at the age of 99, the court announced in a statement.

The cause of death was "complications following a stroke he suffered on July 15," the court said.

Stevens served on the Supreme Court for nearly 35 years, and became its leading liberal -- although Stevens himself rejected that characterization.

"I don't think of myself as a liberal at all," Stevens told The New York Times in 2007. "I think as part of my general politics, I'm pretty darn conservative."

Nevertheless, in 2018, he wrote an op-ed for the Times, entitled, "Repeal the 2nd Amendment."

And last October, Stevens emerged to say that then-Supreme Court nominee Brett Kavanaugh was unfit for the bench -- an extraordinary rebuke from a retired justice.

“I thought [Kavanaugh] had the qualifications for the Supreme Court, should he be selected,” Stevens said at a closed event held by a retirement group in Boca Raton, as The Palm Beach Post reported. “I’ve changed my views for reasons that have no relationship to his intellectual ability … I feel his performance in the hearings ultimately changed my mind.”

Retired U.S. Supreme Court Justice John Paul Stevens talking about his views and career during a forum at the John F. Kennedy Library in Boston, in 2013. (AP Photo/Michael Dwyer, File)

“For the good of the court,” Stevens said, “it’s not healthy to get a new justice that can only do a part-time job.”

Stevens' influence was felt on issues including abortion rights, protecting consumers and placing limits on the death penalty. He led the high court's decision to allow terrorism suspects held at Guantanamo Bay to plead for their freedom in U.S. courts.

As a federal appeals court judge in Chicago, Stevens was considered a moderate when Republican President Gerald Ford nominated him. On the Supreme Court he became known as an independent thinker and a voice for ordinary people against powerful interests.

He retired in June 2010 at age 90, the second oldest justice in the court's history. Stevens served more than twice the average tenure for a justice.

“On behalf of the Court and retired Justices, I am saddened to report that our colleague Justice John Paul Stevens has passed away," Chief Justice John G. Roberts, Jr. said in a statement.

"A son of the Midwest heartland and a veteran of World War II, Justice Stevens devoted his long life to public service, including 35 years on the Supreme Court," Roberts added. "He brought to our bench an inimitable blend of kindness, humility, wisdom, and independence. His unrelenting commitment to justice has left us a better nation. We extend our deepest condolences to his children Elizabeth and Susan, and to his extended family.”