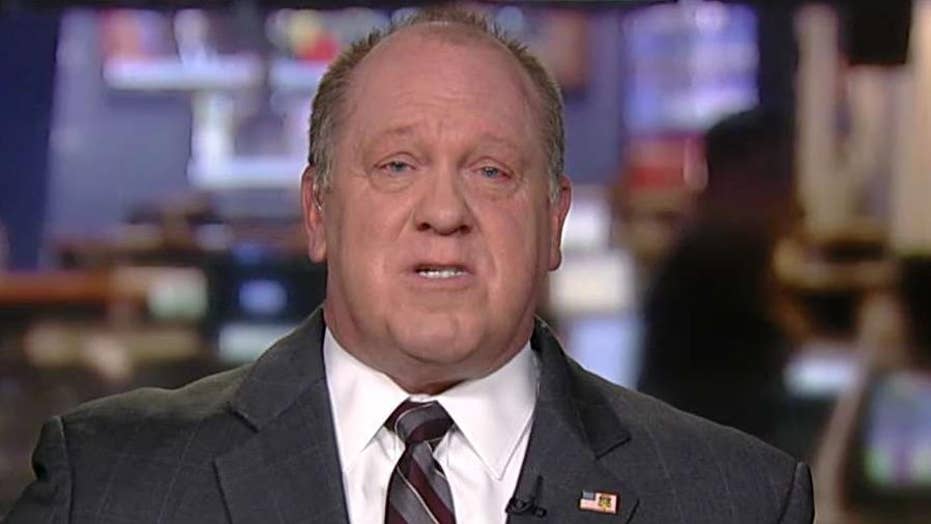 Tom Homan challenges Democrats: What have they done to secure the border?

“The Congress has failed the American people. The Democratic leadership, show me one thing they’ve done to solve this crisis down at the border,” Homan said on America’s Newsroom.

“What have they done to address the surge at the border? The only one who is doing anything is this administration. The president has done executive actions, declared national emergencies. He’s getting sued every time he does executive action to try to stem the flow of the tide. The 9th circuit has got him tied up every time he turns around.”

On Friday, President Trump, whose 2016 campaign promise was to build a wall along the U.S.-Mexico border, threatened to close the Southern Border next week if Mexico does not “immediately stop” the record-breaking surge of illegal immigrants flooding into the United States.

Trump's warning comes as Customs and Border Protection officials say March is on pace to exceed 100,000 border apprehensions -- the highest monthly total in a decade. According to CBP, this week alone, agents have more than 12,000 migrants in custody.

“The DEMOCRATS have given us the weakest immigration laws anywhere in the World. Mexico has the strongest, & they make more than $100 Billion a year on the U.S.,” Trump tweeted Friday. “Therefore, CONGRESS MUST CHANGE OUR WEAK IMMIGRATION LAWS NOW, & Mexico must stop illegals from entering the U.S. through their country and our Southern Border.”

“Mexico has for many years made a fortune off of the U.S., far greater than Border Costs. If Mexico doesn’t immediately stop ALL illegal immigration coming into the United States throug[sic] our Southern Border, I will be CLOSING the Border, or large sections of the Border, next week,” he continued.

“This would be so easy for Mexico to do, but they just take our money and ‘talk.’ Besides, we lose so much money with them, especially when you add in drug trafficking etc.), that the Border closing would be a good thing!”

Trump also threatened to close the border at a campaign rally in Grand Rapids, Michigan Thursday.

The president’s tweets and comments threatening to shut down the southern border come after similar warnings earlier in the week, with Trump accusing Mexico and Central American nations of doing “nothing” as illegal immigration surges.

Trump’s initial warning came following comments made by U.S. Customs and Border Protection Commissioner Kevin McAlleenan, who said this week that the border was at its “breaking point,” noting that there are not enough agents to respond to the flow of illegal immigrants crossing the U.S.-Mexico border.

Meanwhile, the president, declared a national emergency in a bid to free up funding for the barrier along the border. This month, the president issued his first veto on a Democrat-backed measure to cancel the emergency.

New Jersey Democrat Rep. Jeff Van Drew takes a stand on the issue that most Democrats don’t, saying he believes the border needs some kind of barrier to solve the crisis.

“At the same time take I also believe that we should take care of the Dreamers. These were folks that were here since they were little children and they should go through a process where they learn about America, swear the oath, take the test and become Americans.”

“This congressman put politics aside for a moment and talked to Fox News about what he thinks needs to be done to fix the border,” Homan said in response.

“I agree with most of everything he said and that’s what needs to happen. I don’t care if you are Republican or Democrat, there is no downside on securing our border.”

“I don’t care if you are Republican or Democrat your number one responsibility is protect this nation, protect our sovereignty and secure our border. So I agree with the congressman,” Homan continued.

Homan offered a “controversial” solution to the problem, saying he has “done it and it worked.”

“ICE needs to get out there right now and look for these family groups and these single adults who enter this country illegally. They had their due process, they demand to claim asylum, they demand to see a judge. Ok, we’ve done that at great taxpayer expense. They’ve been ordered removed by a federal judge,” said Homan.

“ICE needs to find these family groups and these single adults, find them, detain them and remove them. Because if those orders from a judge don’t mean anything, then there’s no integrity into our system.”

Homan said he did this about three-and-a-half-years ago and “once we removed a large portion of family units, showing there is deterrence, there is some sort of consequence abiding our laws the numbers on the border went down.”