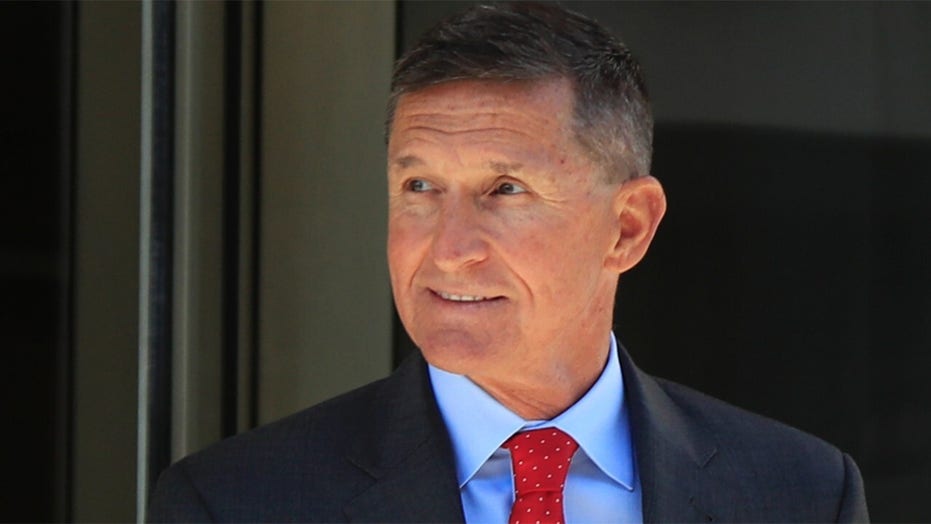 Harvard Law School Professor Emeritus Alan Dershowitz says the Department of Justice should have dismissed the case against the former National Security Adviser a year and a half ago.

Newly released FBI documents suggest a federal judge in Washington was swayed by apparent misrepresentations from a top prosecutor when he issued a memorandum opinion in December 2019 -- a ruling that marked one of the lowest points in former U.S. national security adviser Michael Flynn's effort to withdraw a guilty plea on a charge of lying to investigators.

In the pivotal Dec. 16, 2019, memorandum opinion, D.C. District Court Judge Emmet Sullivan denied Flynn’s request that the government be compelled to search for and produce additional exculpatory "Brady" material. That decision now appears to have been heavily based on inaccurate or misleading claims by top prosecutor Brandon Van Grack.

Van Grack, a former member of Special Counsel Robert Mueller's Russia investigation team, was abruptly removed from the Flynn case on Thursday after Fox News highlighted his apparent noncompliance with Sullivan's February 2018 order to produce Brady material. The Justice Department then dropped the Flynn case entirely, as a mountain of striking exculpatory evidence had emerged -- including a handwritten note from a top FBI official debating whether the bureau's objective was to "get [Flynn] fired."

"Brady" refers to Brady v. Maryland, a 1963 U.S. Supreme Court case in which the court ruled that prosecutors must provide the defense with all evidence they've collected that might exonerate the defendant in a criminal trial; it generally doesn't apply to uncharged individuals, or those who already pleaded guilty.

Flynn's guilty plea to one count of making false statements to the FBI, Sullivan wrote in the December 2019 memorandum opinion, prevented him from "raising claims based on any evidence obtained in violation of the Fourth Amendment."

Then-Special Counsel Robert Mueller walks from the podium after speaking about the Russia investigation at the Department of Justice headquarters in Washington, May 29, 2019. (Associated Press)

Even if Flynn had not waived his Fourth Amendment rights -- which protect the public from unlawful searches and seizures -- Sullivan held, Flynn still needed to "establish that the requested information is favorable" to his defense in order to obtain it -- something he had "failed" to do, the judge said, adopting Van Grack's argument.

However, several statements in the Justice Department's motion to dismiss the Flynn case, as well as supporting exhibits to the motion, directly contradict Van Grack's representations to Sullivan and seemingly undermine the basis for Sullivan's opinion. A review of those statements, several of which were first highlighted by Twitter user Techno Fog, follows.

A decision from Sullivan on how to proceed in the Flynn case could come as soon as next week. Sullivan has previously wondered aloud whether Flynn should be prosecuted for treason, and has displayed open animus towards him in hearings.

Van Grack argument accepted by Sullivan: “As part of the investigation [into Russia’s efforts to interfere in the 2016 election and into links between Russia and persons associated with the Trump campaign], Mr. Flynn made a series of materially false statements about his conversations with the Russian Ambassador.”

DOJ motion to dismiss: “[T]he interview of Mr. Flynn was untethered to, and unjustified by, the FBI’s counterintelligence investigation into Mr. Flynn."

"There was no factual basis for the predication of a new counterintelligence investigation” of Flynn.

Citing appellate court precedent, the Justice Department further noted that the "materiality" standard "requires more than mere 'relevance' or relatedness to the matter being investigated; it requires 'probative weight,' whereby the statement is 'reasonably likely to influence the tribunal in making a determination required to be made.'"

The Justice Department said it was "not persuaded that the January 24, 2017 interview [with Flynn in the White House that led to the false statements charge] was conducted with a legitimate investigative basis and therefore does not believe Mr. Flynn’s statements were material even if untrue. Moreover, we not believe that the Government can prove either the relevant false statements or their materiality beyond a reasonable doubt."

Van Grack argument accepted by Sullivan: "Any communications between the FBI and DOJ before and after Mr. Flynn’s January 24, 2017 FBI interview has no bearing on his false statements to the FBI, and the discussions are not favorable and material to sentencing.”

DOJ motion to dismiss: “[FBI former head of counterintelligence Bill] Priestap’s notes dated January 24 state, ‘What’s our goal? Truth/Admission or to get him to lie, so we can prosecute him or get him fired?’”

Additionally, agents already had transcripts of Flynn's calls with Russia's ambassador, seemingly negating their need to ask Flynn about what he said during those calls. And, Flynn was aware that the FBI had monitored his calls: Agents told him so, and the FBI had publicly admitted it prior to the interview.

Van Grack argument accepted by Sullivan: “[T]he government has already provided Mr. Flynn with . . . information that could reasonably be construed as favorable and material to sentencing about such pre-interview discussions, including the language quoted in the request.”

“Mr. Flynn’s communications with the Russian ambassador implicated no crime.”

“Even if he told the truth, Mr. Flynn’s statements could not have conceivably ‘influenced’ an investigation that had neither a legitimate counterintelligence nor criminal purpose.”

Van Grack argument accepted by Sullivan: “Mr. Flynn’s other argument — that his false statements about his conversations with the Russian Ambassador were not related to the investigation into Russia’s efforts to interfere in the election — is unavailing.”

“Mr. Flynn’s calls with the Russian ambassador — the only new information to arise since the FBI’s decision to close out his investigation —did not constitute an articulable factual basis to open any counterintelligence investigation or criminal investigation.”

Van Grack argument accepted by Sullivan: “Here, Mr. Flynn’s false statements to the FBI about his conversations with the Russian Ambassador were relevant to the FBI’s [Russian interference] inquiry.”

DOJ motion to dismiss: “FBI leadership (“the 7th Floor”) determined to continue its investigation of Mr. Flynn on the basis of these calls, and considered opening a new criminal investigation based solely on a potential violation of the Logan Act.”

The Logan Act, an obscure statute, has never been used successfully in a criminal prosecution. Enacted in 1799, before telephones, it was intended to prevent individuals from falsely claiming to represent the United States government abroad. The DOJ noted the total lack of Logan Act convictions in its motion.

Van Grack argument accepted by Sullivan:  “Finally, the Court summarily disposes of Mr. Flynn’s arguments that the FBI conducted an ambush interview for the purpose of trapping him into making false statements.”

DOJ motion to dismiss: “Under these circumstances, the Government cannot explain, much less prove to a jury beyond a reasonable doubt, how false statements are “material” to an investigation that — as explained above — seems to have been undertaken only to elicit those very false statements and thereby criminalize Mr. Flynn.”

“Priestap’s notes dated January 24 state, ‘What’s our goal? Truth/Admission or to get him to lie, so we can prosecute him or get him fired?’”

According to Flynn's legal team in December 2018, FBI agents Peter Strzok and Joe Pientka deliberately did not instruct him that any false statements he made could constitute a crime, and decided not to "confront" him directly about anything he said that contradicted their knowledge of his wiretapped communications with former Russian ambassador Sergey Kislyak.

WHO IS MYSTERY FBI AGENT JOE PIENTKA, AND WHY IS FBI HIDING HIM?

McCabe said that he told Flynn he “felt that we needed to have two of our agents sit down” to discuss his contacts with Russian officials. “I explained that I thought the quickest way to get this done was to have a conversation between [Flynn] and the agents only," McCabe wrote. "I further stated that if LTG Flynn wished to include anyone else in the meeting, like the White House Counsel for instance, that I would need to involve the Department of Justice. [General Flynn] stated that this would not be necessary and agreed to meet with the agents without any additional participants."

Explaining why Flynn was not warned about the possible consequences of making false statements, one of the agents wrote in an FD-302 form --- in which FBI agents document what transpired in interviews with witnesses -- that FBI brass had "decided the agents would not warn Flynn that it was a crime to lie during an FBI interview because they wanted Flynn to be relaxed, and they were concerned that giving the warnings might adversely affect the rapport."

The tactics were apparently in sharp contrast to the FBI's approach to interviewing former Trump aide George Papadopoulos, who also pleaded guilty to making false statements and was recently released from prison. Mueller's team, in a court filing, took pains to note that FBI agents who interviewed Papadopoulos on Jan. 27, 2017 -- just days after the Flynn interview -- had advised Papadopoulos that "lying to them 'is a federal offense'" and that he could get "in trouble" if he did not tell the truth.

Van Grack is also withdrawing from other unrelated cases as well as the Flynn case, raising questions about his future at the Justice Department. No explanation was given for the withdrawals, but an administration official tells Fox News that Van Grack is still at Justice and has not resigned.

Separately, it has emerged that then-President Obama was aware of the details of Flynn's intercepted December 2016 phone calls with then-Russian Ambassador Sergey Kislyak, apparently surprising then-Deputy Attorney General Sally Yates, according to documents released Thursday as exhibits to the government's motion to dismiss the Flynn case.

Obama's unexpectedly intimate knowledge of the details of Flynn's calls, which the FBI acknowledged at the time were not criminal or even improper, raised eyebrows because of his own history with Flynn -- and because top FBI officials secretly discussed whether their goal was to "get [Flynn] fired" when they interviewed him in the White House on Jan. 24, 2017.