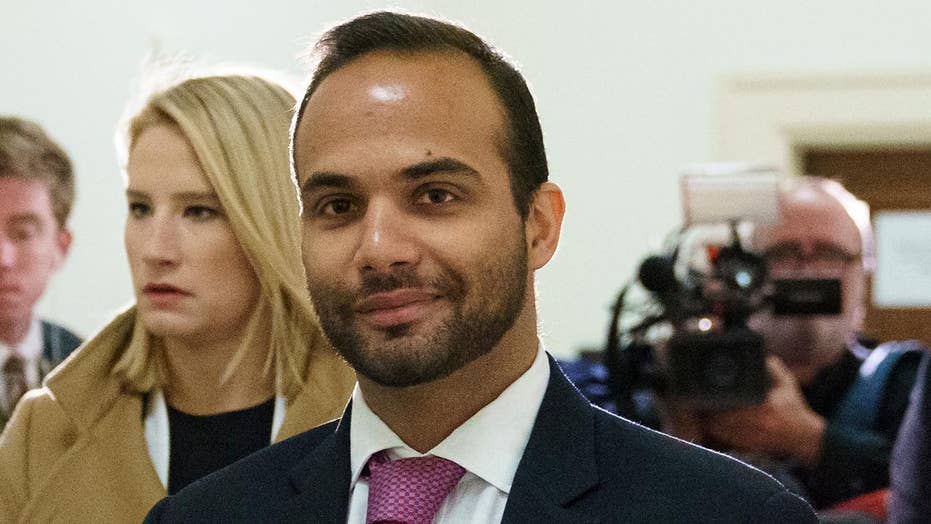 Is America safer with George Papadopoulos in prison?

Simona Papadopoulos weighs in on the accusations against her husband on 'Tucker Carlson Tonight.'

Papadopoulos, who pleaded guilty to making false statements to federal prosecutors in the special counsel’s investigation into Russian meddling and potential collusion with Trump campaign associates during the 2016 election, reported to prison in Oxford, Wis., on Nov. 26.

“George Papadopoulos was released from the minimum security facility and is no longer in the custody of the Federal Bureau of Prisons,” a spokesperson for the Federal Correctional Institute, Oxford told Fox News on Friday.

The FCI spokesperson told Fox News he left before the 14 days was up because he had "two days of jail credit," explaining that Papadopoulos, during his indictment process, spent two days in jail.

Papadopoulos served two days in prison in July 2017. A spokesperson for the special counsel directed Fox News to the former Trump campaign aide's defense sentencing memo, which revealed that he was publicly arrested by federal investigators on July 27, 2017, at Dulles International Airport and detained overnight for his arraignment the following day.

As part of his guilty plea, Papadopoulos also agreed to pay a $9,500 fine and complete 200 hours of community service.

Papadopoulos made false statements regarding his communications with an overseas professor who had connections with the Russian government.

Neither Papadopoulos nor his attorneys immediately responded to Fox News’ request for comment.

However, Papadopoulos tweeted following his release, saying that he was "extremely grateful to patriots who supported me." He also touted the release of a book he wrote.

Prior to beginning his sentence, Papadopoulos had been on a Twitter tear complaining about the investigation. Last month told “Fox & Friends” that he was even “considering withdrawing” his agreement with the government after learning “certain information.”

The Associated Press reported in November that Papadopoulos was seeking immunity to testify before the Senate Intelligence Committee, after speaking on the House side without that protection.

On Twitter, Papadopoulos said cryptically: “While I cannot disclose the information publicly, it’s a fact that both me and congress know who the SPY within the campaign was. Congress will likely include it in a report later on. Eyes were everywhere during 2016.”

Whether Papadopoulos truly has information damaging to the probe is unclear.