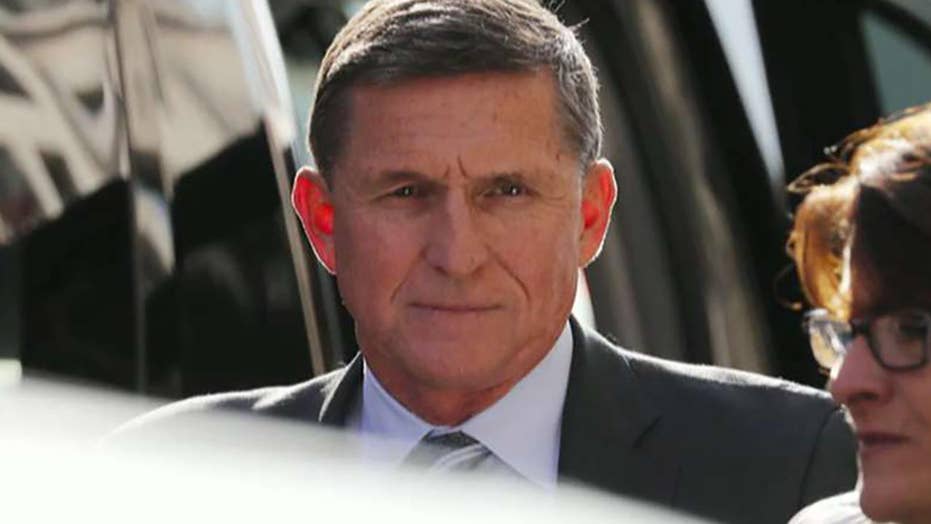 Judge Andrew Napolitano breaks down the 'bizarre twist and turns' in the case against the former national security adviser.

The federal judge presiding over the case of ex-National Security Adviser Michael Flynn has canceled a hearing scheduled for next week, citing his lawyers’ latest motion — which made a slew of misconduct allegations against the government while seeking access to supposedly exculpatory evidence.

U.S. District Judge Emmet Sullivan had scheduled a hearing for Nov. 7 with Flynn’s attorney and federal prosecutors in the long-running case, but said Monday it would no longer take place.

The cancellation comes just days after Flynn’s attorney Sidney Powell filed a 161-page brief demanding the government produce all evidence related to Flynn, while urging the court to “dismiss the entire prosecution for outrageous government misconduct” and hold the prosecutors in contempt.

“#BREAKING: Judge Sullivan has canceled our hearing in early November because of the ‘comprehensive briefing’ of the parties,” Powell tweeted late Monday. It's unclear whether the cancellation signals the judge is considering Powell's demands.

The explosive court document, filed last week, alleged that FBI agents manipulated official records of Flynn’s 2017 interview that led to him being charged with lying to investigators.

The entire case against Flynn stemmed from the 2017 FBI interview, in which Flynn was asked about his conversations with former Russian Ambassador Sergey Kislyak. Flynn ultimately pleaded guilty to making false statements regarding those conversations during his interview, as part of former Special Counsel Robert Mueller’s investigation.

Powell alleged in the court filings that FBI officials manipulated Flynn’s FBI 302 — a form used by agents to report or summarize interviews. It is not clear who may have done the alleged editing, though ex-FBI agent Peter Strzok was involved in the original interview.

“Those changes added an unequivocal statement that ‘Flynn stated he did not’ — in response to whether Mr. Flynn had asked Kislyak to vote in a certain manner or slow down the UN vote [on sanctions],” Powell wrote. “This is a deceptive manipulation because, as the notes of the agents show, Mr. Flynn was not even sure he had spoken to Russia/Kislyak on the issue. He had talked to dozens of countries.”

Powell also alleged that agents added: “or if Kislyak described any Russian response to a request by Flynn.”

“That question and answer does not appear in the notes, yet it was made into a criminal offense,” Powell wrote. “The draft also shows that the agents moved a sentence to make it seem to be an answer to a question it was not.”

Powell also alleged that on Jan. 23, 2017 – the day before the FBI interviewed Flynn at the White House – “the upper echelon of the FBI met to orchestrate” strategies that would have Flynn talk “in such a way as to keep from alerting him from understanding that he was being interviewed in a criminal investigation of which he was the target.”

“In short, they planned to deceive him about the entire scenario, and keep him ‘unguarded,’” Powell claimed.

Prosecutors have strongly rejected claims they're hiding evidence, saying recently "the government has exceeded its discovery and disclosure obligations in this matter," including by providing Flynn with thousands of pages of documents.

On Tuesday, the Justice Department filed a response seeking guidance from the judge while raising concerns that Flynn's legal team is raising these objections even after a guilty plea.

"In an extraordinary reversal, the defendant now claims that he is innocent of the criminal charge in this case," the federal prosecutors wrote. "He makes this claim despite having admitted his guilt, under oath, before two federal judges (including this Court.)"

"The defendant also argues--based almost entirely on evidence previously provided in discovery--that the government engaged in 'conduct so shocking to the conscience and so inimical to our system of justice that it requires the dismissal of the charges for outrageous government conduct,'" they continued, saying that for the "first time," Flynn's legal team is arguing the government had "an obligation" to provide evidence to him "prior to charging him in a criminal case."

The federal prosecutors also criticized Flynn's team over process, arguing in their filing that "issues may not be raised for the first time in a reply brief."

Powell’s defense of Flynn has caused an escalating battle with the government, with Flynn’s sentencing still up in the air for his guilty plea. The government said in late August that the case was ready for sentencing, after months of delay. Sullivan has set a Dec. 18 sentencing date, though it’s unclear whether it could be pushed off again.