Allowing citizens to sue China for damages caused by the novel coronavirus would backfire and open up the United States to the same level of scrutiny from other countries around the world, Sen. Dianne Feinstein, D-Calif., said Thursday.

Feinstein, whose remarks came during a Senate Judiciary Committee hearing, said, "We launch a series of unknown events that could be very, very dangerous. I think this is a huge mistake."

"Where I live... we hold China as a potential trading partner," she said earlier. "As a country that has pulled tens of millions of people out of poverty in a short period of time. And as a country growing into a respectable nation among other nations. And I deeply believe that. I've been to China a number of times. I've studied the issues."

Feinstein claimed other countries, including China, may decide to use the new legal precedent against the U.S., setting off a chain reaction, resulting in global chaos.

Her comments come three months after Missouri's Attorney General Eric Schmitt, a Republican, provided a statement to Fox News about a lawsuit he filed against China on behalf of the state, saying that the impact of COVID-19 has led to thousands of Missourians being infected, killed and economically devastated.

"In Missouri, the impact of the virus is very real -- thousands have been infected and many have died, families have been separated from dying loved ones, small businesses are shuttering their doors, and those living paycheck to paycheck are struggling to put food on their table," he wrote.

AMERICANS BLAME CHINA FOR ITS ROLE IN THE SPREAD OF CORONAVIRUS, SURVEY FINDS 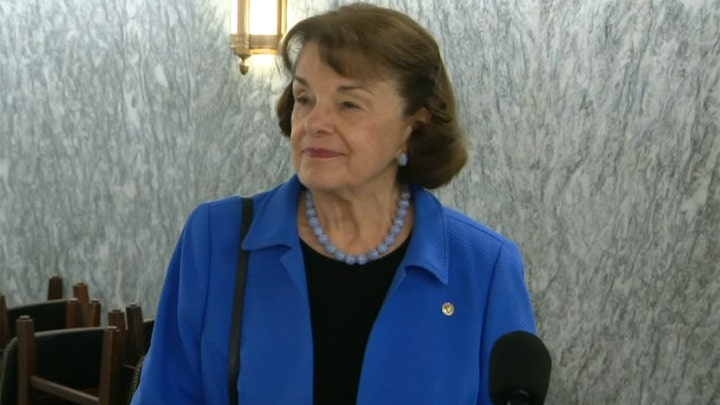 After the lawsuit was filed, an article posted on the Global Times, which is a branch of the Chinese Communist Party (CCP's) People's Daily, said the nation is "extremely dissatisfied with the abuse of litigation" by U.S. leadership," and is considering punitive countermeasures against U.S. individuals, entities and state officials, including Schmitt.

As the partisan divide with respect to China continues to deepen, Democrats have refrained from condemning the CCP's actions while Senate Republicans -- along with members of the Trump administration -- have chosen to take the Chinese government head-on.

In addition to Schmitt's efforts, GOP Sens. Josh Hawley, R-Mo., and Rich Scott, R-Fla., have been publically critical of the CCP, with Scott going so far as to introduce a Senate bill to shield vaccine research from Chinese spies and infiltrators.

Secretary of State Mike Pompeo has also taken a hardline stance against China, warning state governors of China's sophisticated practices with regard to U.S. infiltration and later claiming the CCP poses a real  "risk" to the safety and security of America.

In 2018, President Trump slammed Feinstein for having a Chinese spy on her staff serving as her driver. Feinstein was said to have been “mortified” when she learned the news, according to Politico. The FBI wasn’t able to charge the individual, but Feinstein “forced him to retire,” a source told the San Francisco Chronicle.

Feinstein's comments come as the results of a new Pew Research Center survey were released, showing that over three-quarters of American adults blame the Chinese government for the global spread of the coronavirus and over 60 percent of respondents said the country has done a poor job handling the aftermath of the outbreak.

The survey, which polled 1,003 individuals and was conducted from June 16 to July 14, showed 73 percent of U.S. adults have an unfavorable view of China, which marks the most negative rating in the 15 years that Pew Research Center has been conducting polling on the subject.