Federal law enforcement tear-gassed rioters swarming a courthouse fence in Portland on Wednesday in the 62nd consecutive night of unrest in the liberal city, as tensions remain high despite a tentative agreement between Oregon officials and the Trump administration for the feds to pull back.

Law enforcement deployed multiple volleys of gas and made arrests during protests in the city’s downtown, according to KOIN. They fired canisters and other crowd control munitions after police warned rioters to leave the fence surrounding the federal Hatfield Courthouse alone.

The outlet reported that demonstrators climbed the fence, and the crowd kept going even after officers fired tear gas and stun grenades.

It suggests that the clashes and violence that have marred the city for months are likely to continue even after the Trump administration agreed to a plan with Oregon officials for a phased withdrawal of federal law enforcement from the city.

President Trump on Thursday reiterated that such a withdrawal was dependent on local law enforcement taking over, tweeting that Oregon Gov. Kate Brown “must clear out, and in some cases arrest, the Anarchists & Agitators in Portland.”

“If she can’t do it, the Federal Government will do it for her. We will not be leaving until there is safety!” he said.

Acting Secretary of Homeland Security Chad Wolf announced in a statement on Wednesday that he and Brown had reached a joint plan to end "the violent activity in Portland directed at federal properties and law enforcement officers.”

“That plan includes the robust presence of Oregon State Police in downtown Portland,” Wolf said. “State and local law enforcement will begin securing properties and streets, especially those surrounding federal properties, that have been under nightly attack for the past two months. Oregon State Police will coordinate with Federal Protective Service (FPS) officers to ensure all federal facilities remain protected and secure." 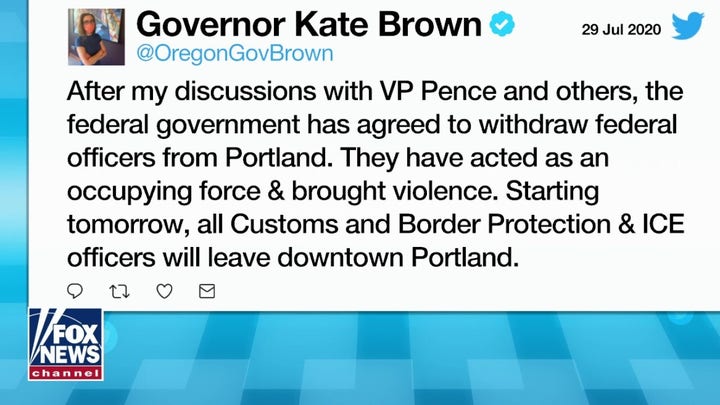 Brown said that “the federal government has agreed to withdraw federal officers from Portland. They have acted as an occupying force & brought violence. Starting tomorrow, all Customs and Border Protection & ICE officers will leave downtown Portland.”

DHS has since emphasized that the withdrawal of law enforcement will not begin until the agency is assured that the courthouse and other federal property will not be attacked. The plan sees the U.S. Marshals Service and Federal Protective Service agents remaining inside a fence set up around the courthouse, along with some state police, to keep demonstrators out. State police will also be outside the fence to keep them back.

“I want to be clear about this, the entire DHS law enforcement presence in Portland will remain in Portland, whether they’re staying inside the courthouse, next door or a different location,” Wolf said on a call with reporters on Wednesday.

The agreement tentatively marks an end to a weeks-long feud between the federal government and state and local officials who have backed protesters and accused federal law enforcement of escalating violence with their presence and response to the riots.

Democrats nationally have joined in that criticism, accusing Trump of sending “stormtroopers” to Portland and of doing so in order to help his re-election campaign.

The Trump administration has pushed back, highlighting the violence that officers have been met with as they tried to protect the courthouse, noting that the federal presence has mostly been kept to the vicinity of the courthouse.

Officials say that agents have been doxed, blinded by lasers and attacked by “violent anarchists” with weapons including slingshots and ball bearings. Meanwhile, city officials said this week they are fining the federal government $500 for every 15 minutes it maintains fencing outside of the courthouse.