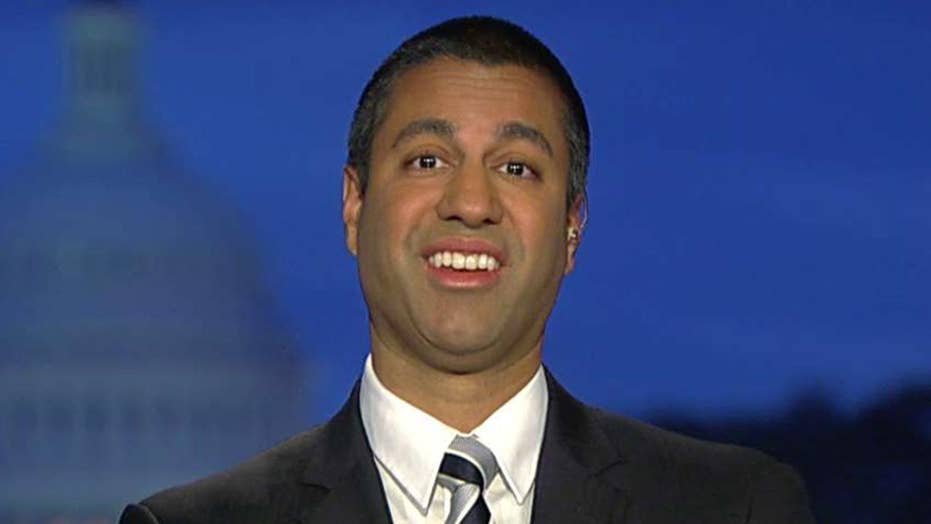 Ajit Pai addresses criticism of his proposal and explains what it means for you on 'Fox & Friends.'

FCC Chairman Ajit Pai on Monday blasted net neutrality activists who protested outside his home with signs directed at his children, saying the demonstration “crosses a line.”

The protests followed Pai saying last week that he would follow through on his pledge to repeal Obama-era Internet regulations.

The move set up a showdown with consumer groups, but the backlash recently reached Pai's own home -- with activists putting up cardboard signs that ask if this is the world he wants his children to "inherit." One sign says, "They will come to know the truth. Dad murdered democracy in cold blood."

“It certainly crosses a line with me,” Pai told Fox News’ “Fox & Friends” on Monday. “Families … should remain out of it and stop harassing us at our homes. ... It was a little nerve-racking, especially for my wife who’s not involved in this space.”

The 2015 rules -- known as net neutrality -- were designed to ensure that Internet service providers treat all online content and apps equally. They impose utility-style regulation on ISPs such as Comcast, AT&T and Verizon to prevent them from favoring their own digital services over those of their rivals.

But Pai argues the rules discourage the ISPs from making investments in their network that would provide even better and faster online access.

He also said Monday that he thinks the five-member Federal Communications Commission will vote 3-2 in favor of repealing the regulations. The vote is scheduled for Dec. 14.

Pai has reportedly distributed his alternative plan to other commissioners.

Fellow Commissioner Mignon L. Clyburn has called Pai’s proposals “a giveaway to the nation’s largest communications companies, at the expense of consumers and innovation.”

Clyburn and Jessica Rosenworcel are the lone Democrats on the commission.