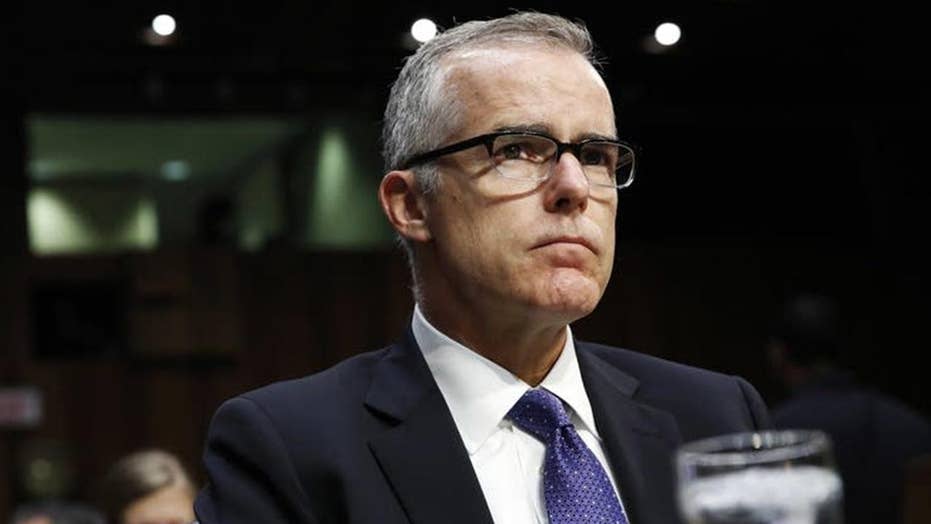 Newly released internal FBI documents suggest Deputy Attorney General Rod Rosenstein may have accelerated the review of ex-FBI Deputy Director Andrew McCabe's alleged misconduct to ensure he was terminated prior to his retirement, just days before he would have been eligible for a lifetime pension.

In a handwritten note addressed to FBI Director Christopher Wray and Deputy Director David Bowdich, the head of the FBI's Office of Professional Responsibility (OPR), Candice Will, stated the agency was following "standard procedures" as part of its probe into allegations that McCabe had lied about leaking sensitive information without authorization to The Wall Street Journal.

"It seems unlikely that this will reach final resolution before Mr. McCabe’s March 18 retirement date, but that is up to the DAG,” Will wrote, referring to Rosenstein. The note was dated March 7, 2018.

Will added that Rosenstein has "final decisionmaking authority over adverse disciplinary actions affecting the DD," referring to McCabe.

On March 5, Hill alerted Bowdich that Rosenstein had been updated on the progress of the McCabe review and that the FBI was "not slow-walking" the matter but instead was following "established procedures."

That same day, Bowdich responded: "Thanks Candice, as you know we will be second-guessed by some every step of the way however this ends up. As long as we follow the regular process we are where we should be on this issue."

But McCabe was summarily fired March 16 for committing three violations of the bureau's ethics code, less than 48 hours before his retirement was set to take effect.

“Pursuant to Department Order 1202, and based on the report of the Inspector General, the findings of the FBI Office of Professional Responsibility, and the recommendation of the Department’s senior career official, I have terminated the employment of Andrew McCabe effective immediately,” then-Attorney General Jeff Sessions said in a statement.

Sessions added that McCabe had “made an unauthorized disclosure to the news media and lacked candor — including under oath — on multiple occasions.”

McCabe's alleged violations initially were uncovered by the Justice Department's Office of the Inspector General and confirmed by the FBI's Office of Professional Responsibility. They included a lack of candor under oath, a lack of candor when not under oath, and the improper disclosure of non-public information to the media about the FBI investigation into the Clinton Foundation.

The violations stemmed from McCabe's response to an October 2016 Wall Street Journal report about sizeable campaign donations from Democrats to McCabe's wife, Jill, during her campaign for the Virginia State Senate. The investigation found that McCabe instructed FBI lawyer Lisa Page and FBI public affairs chief Michael Kortan to work with the Journal's reporter to set the record straight.

FILE - In this Feb. 9, 2016, file photo, Director of the National Intelligence James Clapper speaks on Capitol Hill in Washington. Clapper said Sept. 20 that he could never agree with a decision to pardon Edward Snowden. Snowden was an National Security Agency contract employee when he took more than a million documents and leaked them to journalists who revealed massive domestic surveillance programs begun in the aftermath of the 9/11 attacks. (AP Photo/Alex Brandon, File) (The Associated Press)

An investigative source told Fox News at the time that Page’s statements to investigators were “critical” because they directly contradicted her boss, McCabe.

According to the source, McCabe's lack of candor about the contact with the Journal reporter led to his firing. The source added that Page's testimony about the matter contradicted McCabe's. Then-FBI Director James Comey claimed he never authorized the leak to the Journal.

Clapper, who also separately authored a letter of support for suspected Senate intelligence leaker James Wolfe, wrote to Wray that McCabe was the "consummate public servant" who possesses a "sharp intellect."

SEVEN HIGHLIGHTS FROM THE DOJ'S BOMBSHELL REPORT INTO DOJ, FBI MISCONDUCT ON CLINTON AND RUSSIA PROBES

Meanwhile, also on Tuesday, House Republicans published a transcript of their explosive closed-door questioning of Comey from the day before.

But unlike in the Hillary Clinton email investigation -- which saw no false statements charges, even though investigators wrote that they suspected Clinton herself was not truthful about her knowledge of classified markings on documents -- Flynn was hit with a single charge of lying to authorities about his talks with Kislyak.

The federal judge overseeing Flynn's sentencing said he was "disgusted" by the career military official's actions on Tuesday. At Flynn's request, a final decision on his sentencing won't be made until March.