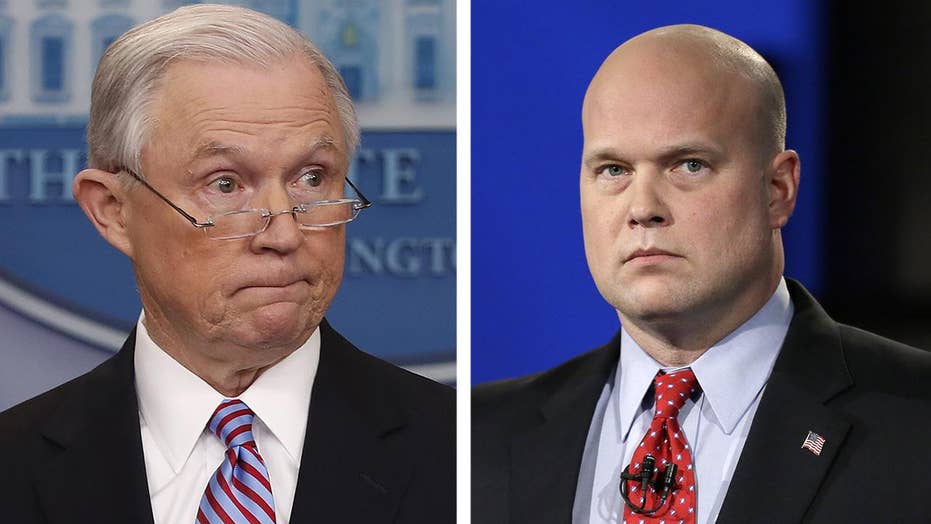 Senior House and Senate Democrats sent preservation letters to the administration, intelligence agencies and FBI for all records relevant to the Russia investigation, as well as, the resignation of Attorney General Sessions. Catherine Herridge goes in-depth for 'Special Report.'

Thousands of liberal protesters streamed through the streets of New York City into Union Square on Thursday night to protest President Trump's firing of Attorney General Jeff Sessions yesterday, in a rapidly organized demonstration that even some participants acknowledged was as high on irony as it was on enthusiasm.

There was a heavy police presence as the protesters demanded that Acting Attorney General Matthew Whitaker step aside. Whitaker has written critically of Special Counsel Robert Mueller's Russian election meddling probe, which he now oversees.

Some carried signs and banners saying, "I love this country more than Trump hates it," "This is what democracy looks like," “Repeal, Replace Trump,” and "Hands off Mueller."

"The timing here is not a coincidence,” Shannon Stagman, a member of the liberal group Empire State Indivisible, told Gothamist. “Donald Trump acted while we were still embroiled in midterm elections because he wanted to catch us off guard. But we’re always ready to rise up and defend the rule of law."

MSNBC host and election night anchor Rachel Maddow went on Twitter to promote a series of planned protests to “protect the Mueller investigation" this week, but the anti-Trump star has denied helping organize the street marches.

Maddow tweeted on Wednesday, “It's happening. This is the ‘Break Glass in Case of Emergency’ plan to protect the Mueller investigation. 5pm (local time) protests tomorrow/Thursday Nov 8. We knew this would happen at some point -- the day has arrived.”

Groups including MoveOn and Rise and Resist helped organize the fray, as throngs of protesters headed from 7th Avenue to Union Square. Similar protests emerged across the country Thursday evening, but the one in New York was by far the largest.

Some protesters even brought drums, according to posts on Twitter.

But as conservatives pointed to numerous cases in which prominent Democrats had previously called for Sessions' termination, some progressives admitted the situation was an unusual sign of the times.

"I cannot believe I'm going to have to march in anger at the fact that racist woodsprite Jeff Sessions lost his job, but here we are," liberal journalist Mark Harris wrote on Twitter.

On Thursday, top Democrats on the House Judiciary Committee called for hearings into Sessions' firing.

“There is little doubt that President Trump’s decision to force the firing of Attorney General Sessions places Special Counsel Mueller’s inquiry at grave risk,” the Democrats wrote to Whitaker, before asking him to recuse himself and return Deputy Attorney General Rod Rosenstein to his role supervising the Russia investigation.

Sessions, on the advice of career Justice Department officials, recused himself from that role after reports emerged contradicting his testimony that he had not met with any Russians during the 2016 presidential campaign. That decision frustrated Trump, who considered it an unnecessarily betrayal.

A 'BREAK-THE-GLASS MOMENT': DEMS SOUND ALARM AFTER SESSIONS GETS THE BOOT

The Democrats demanded that Whitaker preserve all documents pertaining to Trump's decision to push Sessions to resign, signaling that they intend to scrutinize them when they retake control of the Judiciary Committee after the new Congress is seated in January.

“[T]he president now directly threatens the rule of law itself," they wrote. "Democrats and Republicans [should] set aside partisanship to avoid a full-fledged constitutional crisis in the Watergate era. It is therefore necessary that we set aside our political interests and work together to protect our nation and the rule of law from this grave threat."

In his new capacity, Whitaker, who can hold his post for approximately six months without Senate confirmation, is the head official at the Justice Department. That means, at least for now, that he oversees the Mueller probe and the agency's other federal investigations, including the New York prosecutors' look into the finances of Trump and his former aides.

The DOJ is an Executive Branch department staffed by both career officials, who are shielded from arbitrary termination, and political appointees like Sessions and Whitaker who serve at the president's pleasure.

Whitaker has previously written an op-ed in 2017 in which he argued that "any investigation into President Trump's finances or the finances of his family would require Mueller to return to Rod Rosenstein for additional authority under Mueller's appointment as special counsel."

Whitaker continued, "If he were to continue to investigate the financial relationships without a broadened scope in his appointment, then this would raise serious concerns that the special counsel's investigation was a mere witch hunt." (Trump has repeatedly derided the Mueller probe as a "witch hunt," characterizing it as a partisan effort to detract from his accomplishments in office.)

"It is time for Rosenstein ... to order Mueller to limit the scope of his investigation to the four corners of the order appointing him special counsel," Whitaker concluded. "If he doesn't, then Mueller's investigation will eventually start to look like a political fishing expedition. This would not only be out of character for a respected figure like Mueller, but also could be damaging to the President of the United States and his family -- and by extension, to the country."

And in July 2017, Whitaker told CNN, "I could see a scenario where Jeff Sessions is replaced with a recess appointment, and that attorney general doesn’t fire Bob Mueller, but he just reduces his budget to so low that his investigation grinds to almost a halt.”

At a press conference earlier Wednesday at the White House, Trump emphasized that he could order Justice Department officials to end the Mueller investigation at any point.

"I could fire everybody right now, but I don't want to stop it because politically I don't like stopping it," Trump said. "I am not concerned about anything with the Russian investigation, because it is a hoax. There is no collusion."

Democrats united Wednesday to demand Whitaker's recusal, with some citing his previous writings and statements as supporting the notion that he will be improperly biased. (Republicans made a similar argument, rejected by Democrats, that the political biases expressed by now-fired FBI Agent Peter Strzok, a key player in the Russia and Hillary Clinton probes, should have disqualified him from working on the cases.)

"I think what ultimately the president is going to start doing is putting pressure on Rod J. Rosenstein, who is in charge of this investigation, is acting attorney general, and really try to get Rod to maybe even cut the budget of Bob Mueller and do something a little more stage crafty than the blunt instrument of firing the attorney general and trying to replace him," Whitaker said in a July interview.