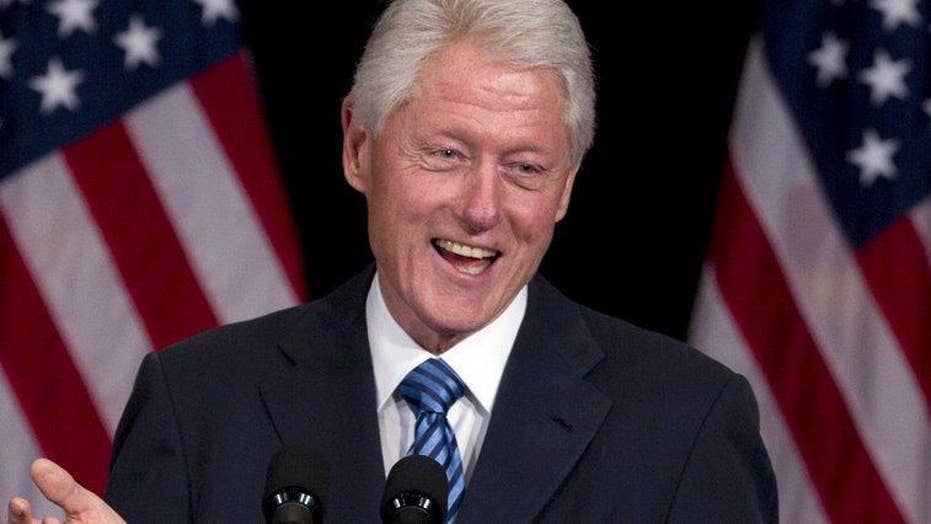 New series of Democratic complaints about ObamaCare, most notably by former President Bill Clinton, is turning heads, but will it become a big talking point for Donald Trump against Hillary? 'On the Record' panel sounds off

Hillary Clinton and her closest aides produced a gameplan to respond to questions about Bill Clinton’s alleged sexual misconduct and Hillary Clinton’s treatment of her husband’s accusers nine months before Donald Trump made the issue a prominent topic in the presidential race, according to newly published emails from WikiLeaks.

The emails, purportedly hacked from Clinton Campaign Chairman John Podesta’s account, reveal the questions Clinton’s team expected her to face about the women who’ve accused her former president husband of sexual assault and rape – and the optimal way to present her answers. The most extensive information was contained in a 157-page debate prep book attached to a March email from Campaign Manager Robby Mook. At the time, Clinton, now the Democratic presidential nominee, was locked in a tight primary battle with Vermont Sen. Bernie Sanders.

The prep book was divided into three sections -- personal/political, domestic and foreign policy -- and 58 topics, ranging from “Can the American people trust you?” to “Should we call this ‘Islamic terrorism?’”

Topic 14 was “WJC: What do you say to the women making accusations?” Specifically, the question asked if Hillary Clinton’s actions helping her husband “cast doubt on these women’s stories” was “in line with feminism.”

Clinton’s strategy, as it was for many answers in the prep book, was to dismiss the questions as off-base and outdated where possible and then pivot to her vision for the country.

“That’s not true,” the first point of a five-point answer began. “And all of this was fought out in the 90’s. I understand that now people want to bring it back for their own political reasons.”

Though Trump, the Republican presidential nominee, and Clinton didn’t meet face-to-face until last month at Hofstra University, Trump repeatedly brought up Bill Clinton’s past during his own hard-fought primary campaign, a preview of how he would eventually combat Hillary Clinton. Even in January, when the debate prep book was initially compiled, and when Trump’s nomination was far from a sure thing, the billionaire businessman’s attacks didn’t go unnoticed.

“So if Donald Trump wants to attack my family, that’s his choice,” point four of the answer began. “Listening to Donald Trump on the campaign trail, it’s clear to me that he and I see the world very differently.”

Point five added a twist on Trump’s “Make America Great Again” slogan: “You don’t make our country great by tearing our people down.”

Trump didn’t broach the issue with Clinton during the first debate at Hofstra, opting for a more restrained approach. But on Oct. 7, an 11-year-old hot mic tape surfaced showing Trump making lewd remarks about women. Clinton and her surrogates seized on the footage, which led several Republicans to un-endorse their party’s nominee – who since that development has faced separate allegations he groped and forced himself on women, which he denies.

While apologizing for the 2005 tape remarks, Trump swiftly returned to citing the allegations made by several women against Bill Clinton. In Sunday’s debate, he said: “Hillary Clinton attacked those same women and attacked them viciously.”

“Well, first, let me start by saying that so much of what he’s just said is not right, but he gets to run his campaign any way he chooses,” she said. “He gets to decide what he wants to talk about. Instead of answering people’s questions, talking about our agenda, laying out the plans that we have that we think can make a better life and a better country, that’s his choice.”