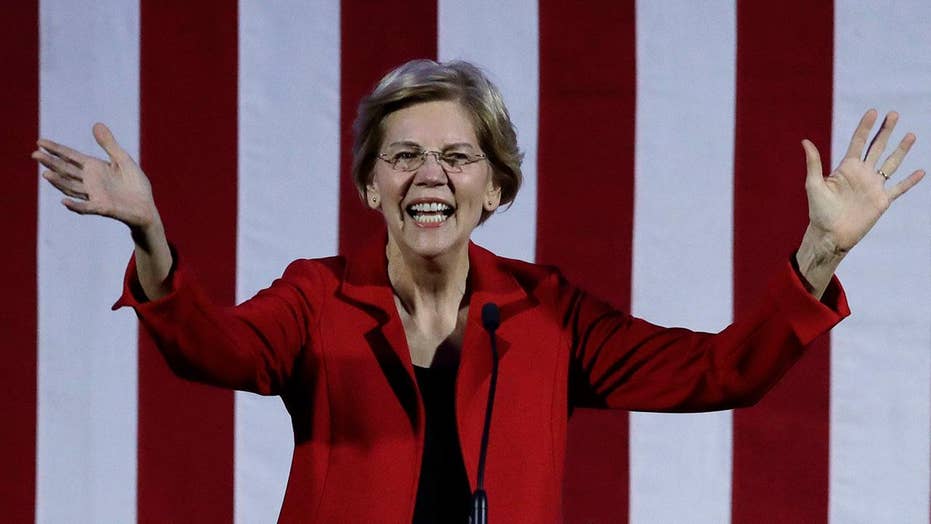 Elizabeth Warren’s “dedicated supporters” give her a chance in 2020, but the controversy surrounding her heritage could prove costly, according to Chief Political Anchor Bret Baier and a team of Fox News experts.

Doocy talked up the Massachusetts senator’s chances, pointing to her “very dedicated supporters” as a key factor in her bid.

“She is the only person I’ve seen, so far, where out in Iowa of the thousand people that turned out to see her on a Saturday night every fifth or sixth person was wearing a shirt that said 'Nevertheless She Persisted' - which became famous when Mitch McConnell tried to smack talk her from the Senate Floor a couple of months ago,” he said.

“So despite all the talk about her ancestry and how confusing she has made things … She has got very dedicated supporters.”

“There’s a lot of media attention on the far-left and there’s not as much on what we used to call ‘Blue Dogs’,” she said.

“I think both are pieces of the Democratic coalition and the challenge will be finding a candidate who can speak authentically to both, because we’re going to need both, and try and split that difference.

“I think that there’s a lot of energy, quite frankly, in both pieces of the Democratic Party and we’re going to be fighting that out over the next months of this Primary.”

Stirewalt, though, pointed to the controversy surrounding her heritage as something that will stick in the mind of voters.

“She managed to get it wrong two or three different ways,” he said.

ELIZABETH WARREN HECKLED AT CAMPAIGN STOP: 'WHY DID YOU LIE?'

“Ultimately had to come out and say, ‘yeah and it will come out later that I exaggerated in other ways too’ and basically she had to hold open the door at the end that yeah they’ll be more because there was a card, reportedly in her own handwriting, when she applied for the Texas State Bar that she had listed herself as a Native American.

“So if you’re a rank-and-file Democrat you’re thinking about electability, that’s standing foremost in your mind.

“Now she can make it a positive because it makes Democrats mad when Donald Trump attacks her and she can use that as a positive, but for those thinking about electability it’s going to be a factor.”

Each week, Baier combines his media knowledge and years working on Capitol Hill to guide listeners through a conversation about possible candidates in the 2020 presidential election.

Listen to a new episode of "The Candidates with Bret Baier" every Tuesday for another deep dive into more 2020 hopefuls. Subscribe on Apple Podcasts here.