Massachusetts Sen. Elizabeth Warren said Monday she is filing paperwork to launch an exploratory committee for president, taking her first major step toward a 2020 run for the White House.

“Today, I’m launching an exploratory committee for president,” Warren, 69, a Democrat, said in a video released to supporters.

In her announcement, the liberal firebrand argued government "has been bought and paid for by a bunch of billionaires and giant corporations that think they get to dictate the rules that affect everyone," calling it "corruption, pure and simple."

"That’s not how government is supposed to work," Warren said. "You know it. I know it. And we know it is time to fight back."

As for details about her campaign, Warren said she'll "announce a plan" early in the new year.

At an afternoon news conference in Cambridge, Mass., Warren told reporters that she is "in this fight all the way."

"Right now, Washington works great for the wealthy and the well-connected," she said. "It's just not working for anyone else. But I am optimistic. I believe in what we can do together ... and together, we're going to make change."

The chairwoman of the Republican National Committee, Ronna McDaniel, reacted to the announcement by saying, "Senator Warren couldn’t be more out of touch. Americans will see her for what she is: another extreme far-left obstructionist and a total fraud."

Warren burst onto the national scene a decade ago during the financial crisis with calls for greater consumer protections. She quickly became one of the party's more prominent liberals even as she sometimes fought with Obama administration officials over their response to the market turmoil.

Now, as a likely presidential contender, she is making an appeal to the party's base. Her video notes the economic challenges facing people of color along with images of a women's march and Warren's participation at an LGBT event.

Warren is the most prominent Democrat yet to make a move toward a presidential bid and has long been a favorite target of President Trump.

In October, Warren took the rare step of releasing DNA test results examining her possible Native American ancestry, in apparent response to persistent criticism from Trump and other Republicans. 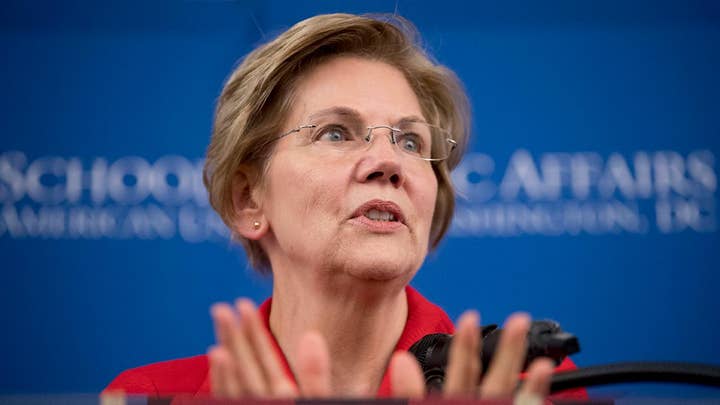 Warren for years has been accused of exaggerating her Native American heritage to help get a job as a Harvard law professor. The president, highlighting the controversy that has dogged her since her first campaign for the Senate, routinely uses the nickname “Pocahontas” for her.

The results released by Warren revealed “strong evidence” that Warren had a Native American ancestor dating back six to 10 generations. But the test may have caused new issues with the Native American community.

The Cherokee Nation responded to the results at the time by arguing that “a DNA test is useless to determine tribal citizenship.”

"Current DNA tests do not even distinguish whether a person’s ancestors were indigenous to North or South America," Cherokee Nation Secretary of State Chuck Hoskin Jr. said in a press release.

The DNA test was widely seen as an effort to put the controversy behind her, ahead of an expected run for the White House.

But that's likely to change quickly in the new year as other leading Democrats take steps toward White House runs.

Warren enters a Democratic field that's shaping up as the most crowded in decades, with many of her Senate colleagues openly weighing their own campaigns, as well as governors, mayors and other prominent citizens. One of her most significant competitors could be Sen. Bernie Sanders, a Vermont independent who is eyeing another presidential run harnessing the same populist rhetoric.