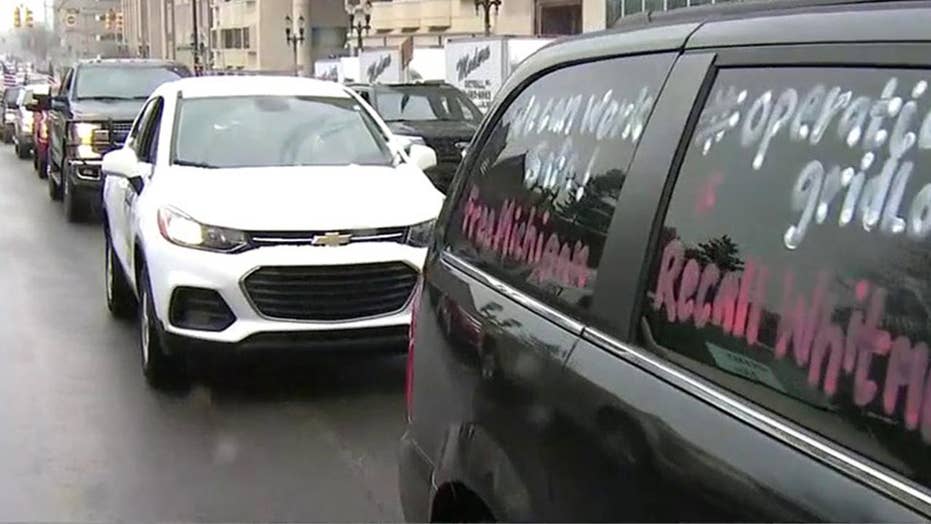 Some Michigan residents say the state stay-at-home order goes too far and are hitting the streets to protest from their cars. FOX Business’ Grady Trimble with more.

Hundreds of cars, trucks and SUVs descended on Michigan’s state capital Wednesday afternoon as part of a noisy protest against Democratic Gov. Gretchen Whitmer’s social-distancing restrictions that critics say have gone too far.

Dubbed “Operation Gridlock” and organized by the Michigan Conservative Coalition, the protest did just that – creating bumper-to-bumper traffic throughout downtown Lansing as demonstrators blasted their horns, waved Americans flags and hoisted placards deriding Whitmer’s orders and demanding that she reopen the state’s economy.

The lockdown measures are meant to curb the spread of the coronavirus outbreak, but Whitmer has gone further than some other governors -- and the backlash in Michigan is among the most heated in the country.

“Let’s start with the fact that some counties have no or very few COVID cases and yet are totally shut down,” Rosanne Ponkowski, president of the Michigan Conservative Coalition, said in a statement. “When did a one-size solution solve everyone’s local issues? Governor Whitmer will put you out of business before allowing mere citizens to be responsible for their own behavior.  That is madness.”

Whitmer announced over the weekend an expansion to her state’s stay-at-home orders, which among other things prohibits residents from visiting family or friends with exceptions for providing care, bans public and private gatherings regardless of size or family ties, and places restrictions on what types of businesses may operate and in what capacity.

Michigan has the fourth-largest number of confirmed cases of COVID-19 in the United States, with more 27,000 being reported as of Wednesday afternoon, according to the Center for Systems Science and Engineering (CSSE) at Johns Hopkins University.

The orders, which are in place until at least May 1, quickly drew criticism from conservative Republicans in the state, who argue that the governor is turning Michigan into a “nanny state” and impeding their civil liberties.

“Quarantine is when you restrict movement of sick people. Tyranny is when you restrict the movement of healthy people,” Meshawn Maddock, an organizer of “Operation Gridlock” with the Michigan Conservative Coalition, told Fox News. “Every person has learned a harsh lesson about social distancing. We don’t need a nanny state to tell people how to be careful.” 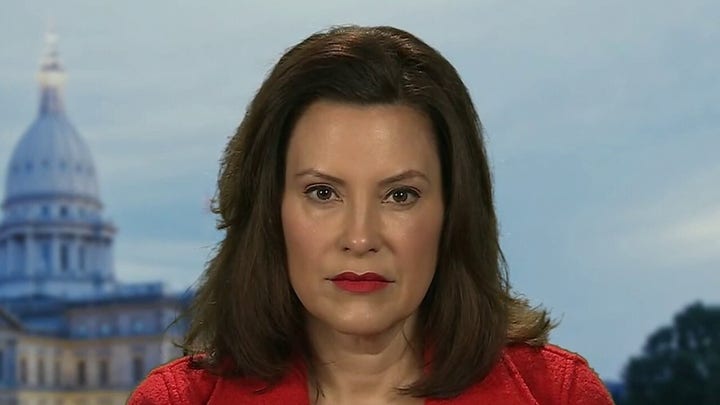 Whitmer – who had to issue clarifications to her orders, most notably when someone tweeted a picture from Walmart saying that children’s car seats were “non-essential” items – has so far remained steady in her resolve that Michigan needs to stick to strict stay-at-home measures in order to tackle the virus. She has also recognized, however, that residents have a right to protest under the Constitution, but asked demonstrators to do so safely.

“Everyone has a right to protest and speak up. We recognize that some people are angry and frustrated, and that’s okay,” Whitmer’s office said Wednesday in a statement. “The Governor will always defend everyone’s rights to free speech. We just ask those who choose to protest these orders to do so in a manner that doesn’t put their health or the health of our first responders at risk.”

The organizers of “Operation Gridlock” have asked anyone participating in Wednesday’s protest to “[d]isplay signs, make noise and be disruptive, but stay in your vehicle so that the ‘Whitmer police’ cannot say you are ignoring the 'social distancing' order.” They have also asked people not to carpool “because gas is cheap” and warned them to not drink too much liquids because they will not be able to access any public restrooms.

“We can get this rally done and stay within the social distancing guidelines,” Marian Sheridan, a co-founder of the Michigan Conservative Coalition, said in a statement.  “Citizens are frankly tired of being treated like babies. As adults, we now know what needs to be done to stay safe. We also believe the liberal attack on the economy is becoming a serious threat right now.  Join us in Lansing. We need to stop the madness and Whitmer needs a plan to re-open Michigan’s economy before it is too late.” 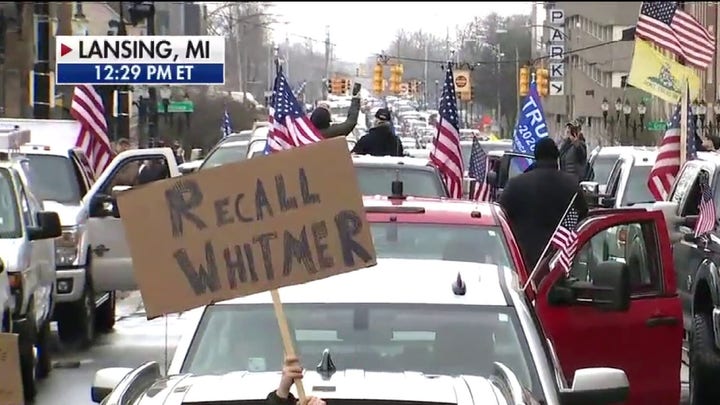 “Operation Gridlock” is just one of a number of demonstrations of civil disobedience around the country by Americans upset with their state’s stay-at-home orders amid the pandemic. While the contagion has sickened more than 610,000 people in the U.S. and killed over 26,000 people, protesters from North Carolina to Wyoming said they’ve been just as concerned with the economic and financial impact from shutdowns – echoing President Trump’s complaint that “the cure” could be worse than the virus.

Alex Berenson, a former New York Times reporter who has been sounding the alarm about what he believes are flawed models dictating the aggressive strategy, drew attention to the protests in North Carolina, as well as a social media uproar in Michigan.

“As someone wrote me, people in [Michigan] know when you lose jobs, they don’t come back,” he tweeted.

As for unemployment, some 16.8 million Americans have lost their jobs in the last three weeks – meaning one in 10 working Americans was out of a job.

Last Thursday, dozens of protesters carrying placards and wearing Guy Fawkes masks ignored Ohio’s social-distancing guidelines to demonstrate on the steps of the state’s capital building in Columbus against Gov. Mike DeWine, a Republican, and his administration’s handling of the outbreak. Demonstrators held signs reading “Open Ohio,” “Quarantine worse than virus,” and “Social distancing or social conditioning. We do not consent.”

A car at the "Operation Gridlock" protest in Lansing, Mich. Photo: Grady Trimble/FBN

In Wyoming, about 20 gathered last week in a park in Casper to protest the government-mandated measures to slow the spread of the coronavirus and let people go back to work, while a Facebook group called “ReOpen NC” has brought in over 21,000 members since it launched last Tuesday; it’s planning to gather in protest later this week.

“We are losing our small businesses, which are the backbone of our economy,” the group wrote on its page. “The shutdown is not warranted, nor sustainable for our area. The vulnerable can be isolated or protected in other ways, without sacrificing our entire state economy.”

While a full reopening of the U.S. economy appears to be a long way off as the country continues to battle the world’s largest outbreak of the novel coronavirus, there are signs that some states are making plans to get things at least partially up-and-running sometime in the near future.

The governors of California, Oregon and Washington announced Monday an agreement for reopening their states’ economies and controlling COVID-19 into the future. Those three states, which recorded some of the earliest cases of the coronavirus and were expected to be hard hit by the pathogen, have defied expectations and so far seen far fewer cases of the disease than expected.

A car in the "Operation Gridlock" protest in Lansing, Mich. Photo: Grady Trimble/FBN

The governors said health outcomes and science, not politics, would drive decision-making. Any modifications to each state’s stay-at-home order will be grounded in a comprehensive understanding of the health impacts of COVID-19, they added, saying no large-scale reopening will take place until metrics reflected a significant decline in the spread of the virus.

A number of states in the Northeast – including New York, which has been the epicenter of the COVID-19 pandemic in the U.S. – announced a similar plan on Monday.